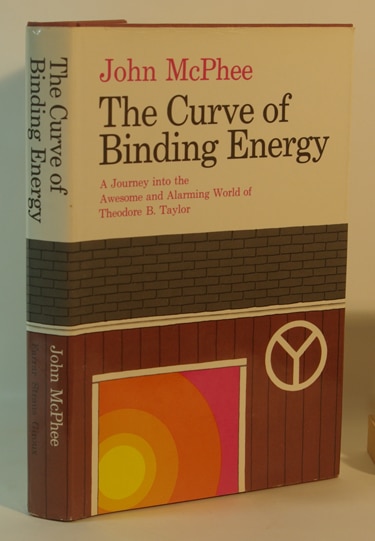 On page15: “Musing once over a little sliver of metallic U235 about the size of a stick of chewing gum, Ted Taylor remarked, ‘If ten percent of this were fissioned, it would be enough to knock down the World Trade Center.”

Was that “predictive programming? Of the kind Michael Hoffman has exposed? Maybe, but it is more predictive technology based upon emerging physics of the day.

While I ain’t no physicist, I proudly boast to have learned my nuclear stuff from hours of conversation with the most versatile and knowledgeable, hands-on guy, the nuke Industry ever had—Galen Windsor.

My first series of columns, archived here at VT, were all about radiation and nuclear power gleaned from memory and broadcasts where Galen was a popular and fearless guest.

It was Galen who pointed me to this book, and highly recommended it.

McPhee was quite a nonfiction investigator and writer, thus it is surely worth a Googol to learn about him.

This book tells about a remarkable physicist at early Los Alamos, Theodore B. Taylor who took it upon himself to totally understand the potential for small, homemade nuke bombs overtaking society, such as we have witnessed since in recent decades.

Not only does this well-written book make things perfectly clear, It validates all that was stated in VT recently
(Nuclear Terrorism: Secret Science and America’s Cowboy Nukes)

page 8: “When he was in his twenties and early thirties, he worked in the theoretical Division at Los Alamos Scientific Laboratory, where he was a conceptual designer of
Nuclear bombs. He designed Davy Crockett, which in its time was the lightest and smallest fission bomb ever made. It weighed less than fifty pounds. He designed Hamlet, which, of all things, was the most efficient bomb ever made in the kiloton range. And he designed the Super Oralloy Bomb, the largest-yield fission bomb that has ever exploded anywhere.”

According to Wikipedia, the Super oralloy is aso called Mark 18. The Mark 18 was tested once, in the Ivy King nuclear test at the Enewetak atoll in the Pacific Ocean. The 1952 test was a complete success at full yield.

This book is a fascinating and truly educational read, It is not too technical for any of us and explains the history of American nuke development clearly and colorfully and accurately.