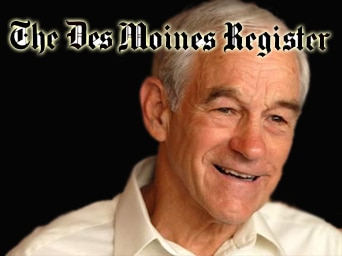 Watch video of Des Moines Register Interview with Ron Paul, and see clarity in a pool of murk.

One presumes that members of Des Moines Register’s edit board would be well-versed in history and geopolitics; Watch the candidate who should have been named to Supreme Court half a century ago school these boards on the board.

What really prompted this column was the total lack of historical knowledge about the instigation of the Korean War by one female voice that is as uninformed as a teen in a mall on the issue. These people help shape the debate? And their endorsement may effect the first state nomination.  Disgusting.

There is a treasure trove of genuine education here, so bring folks in for popcorn and beer to watch and learn. Should be fun.