Home Veterans Raid on Egypt NGOs: The Old Regime is Back in Business 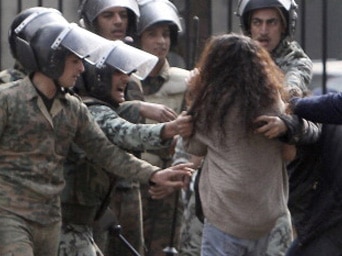 “Less than two weeks after the military violently crushed street protests leaving dozens killed and hundreds injured, some warned Thursday’s raids were a sign of a fiercer crackdown ahead of new protests planned for Jan. 25, the anniversary of the start of the 18-day mass uprising.”

CAIRO — “Egyptian security forces stormed the offices of 17 human rights and pro-democracy groups on Thursday, including several based in the U.S., accused by the country’s military rulers of destabilizing security by fomenting protests with the help of foreign funding” …  First thing first, so try and keep this “foreign aid” cliché aside now, and let’s focus on the allegation of “fomenting protests” because this is the main issue here … Inciting people to take to the streets in huge numbers in a country long ruled by an authoritarian regime that never witnessed protests or even allowed dissent during the last 60 years or so, that is certainly a crime and shame that need to be confronted with swift and decisive actions… “Among the 17 offices which were raided the U.S.-headquartered National Democratic Institute, Freedom House, the International Republican Institute, which is observing Egypt’s ongoing parliamentary elections, as well as Germany’s Konrad Adenauer Foundation, a think-tank with links to Chancellor Angela Merkel’s party”

… Timing is of essence here, so we have to ask why now, .. after almost a whole year since the Egyptian uprising erupted back in 25 January, why storm the headquarters of rights groups now? … Those NGOs have been operating for longtime, and some of them were founded during the rule of Hosni Mubarak… “A joint statement, signed by 28 Egyptian rights groups said that less than two weeks after the military violently crushed street protests leaving dozens killed and hundreds injured, this latest show of force against NGOs heralds a wider clampdown to target those who led the uprising and an attempt to “liquidate” the revolution” …

To put you into context, the raids on the NGOs headquarters which had to look intimidating in every way possible as Special commandos in full gear sealed office doors shut with wax, demanded computer passwords, carted away boxes of documents and searched the bathrooms, is the latest in a series of preplanned and systematically executed actions to abort and hijack the Tahrir square revolution … “The raids on the NGOs were the first since Mubarak’s ouster, though Egyptian officials have been levying accusations for months that the civil society groups are serving a foreign agenda”

… A foreign agenda, we have all heard this before by Gaddafi in Libya, Saleh in Yemen, by the prince of Bahrain and now Bashaar al-Assad in Syria and even Putin in Russia, “The foreign intervention card” is always there on their desks, meticulously folded and ready to be played out in time of need. “The Foreign agenda” …whenever you hear of it, be sure that the people in power are in trouble.

Who needs a foreign agenda to make people scream from the pains of poverty, injustice and brutality? You don’t need a foreign agenda for that; all you need is courage that can take you to the street and a voice that fears not to say you can’t take it no more…

That’s fair enough, but then why we never heard of the military council doing the same and investigated the obscene and unmonitored funding of the Muslim Brotherhood and Salafis -the ultra-conservative Muslims- by the Wahabbi foundations in the Arab peninsula. “181mn dollars have been transferred from Qatar last February to the “partisans of the Sunni society” a NGO affiliated with the Salafi party.” Declared a source in the Justice department … “The Cairo-based Arabic Network for Human Rights Information said in a statement that the raids went beyond the type of Mubarak-era tactics that spurred hundreds of thousands of Egyptians to take to the streets demanding freedom and democracy during this year’s uprising”

…10 months of dragging the military feet on the trial of Mubarak and his inner circle of high officials and business tycoons, ten months of dragging their feet on restoring order and safety to the Egyptian street in order to sustain the feeling of chaos and insecurity, 10 months during which the Tahrir square, the hub of the revolution, has turned into a battle field where the military joined by army of thugs and police snipers have been crushing the remaining die-hard protesters and activists …

“By far the largest recipient of foreign funding in Egypt is the military itself, which has for more than 30 years received about $1.3 billion in annual U.S. security assistance” … The military generals want to put an end to the revolutionary tide on the Egyptian street and restore things to “business as usual”  .. and in doing so they are willing to strike secret deals with the Islamists and neutralize them, abduct 12000 protesters and activists and lock them away after trying them before military tribunals, promote the concept that the revolutionaries of the Tahrir square are but a bunch of rioters and vandals who dared burn the scientific institute of Cairo and were up to burning down the parliament building and that the political activists are just covert agents on the payroll of  foreign governments, and in fulfilling that aim Egypt military generals are willing to even anger the Americans …

“The Obama administration demanded Egyptian authorities immediately halt the raids on non-governmental organizations (NGOs), saying they are “inconsistent” with long-standing U.S-Egypt cooperation” … Egypt military have all the time in the world to reconcile with Washington and make things look consistent again.

But as we said, first things first, the military junta’s priority now is to restore control over things, demean the demands of pro-democracy protesters and taint the reputation of the activists and political rights groups, pave the way to pardon Mubarak and reinstall the disrupted system of policing the state and silence critics as the country approaches the first anniversary of the Tahrir revolution.

… In short, the military council want to derail this revolution from its track and turn this whole thing into some coup-d’état that only managed to topple Mubarak but not the regime … and I don’t think that is something that would anger the white house.  “Nevertheless Egypt military has assured the United States that it’s willing to stop the raids on US and other pro-democracy groups as long as all parties concerned clearly understand that “the regime is back in business.”

For more article by Dr. Ashraf Ezzat viist his website