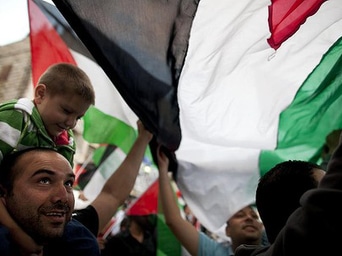 A Palestinian Spring; When?

One would think that out of all the countries and people, albeit “invented” in the Middle East, the Palestinians would be leading the way to a full Arab Spring, Fall, Summer and Winter until the armed and colonial Jewish Occupation comes to an end. Surprisingly, this has not been the case.

More surprising is the fact that after meeting in Cairo a couple of weeks ago, Palestinian leadership, both Fatah and Hamas, had talks of holding elections! As if the elections of a government in the service of a Jewish Occupation is the most pressing issue at hand for Palestinians—more pressing than ending the Jewish Occupation.

The Oslo Accords, an outcome of the so-called ‘peace process’ not only killed any chance at ending the longest military and colonial occupation in modern times—it also killed and snuffed out the First Palestinian Intifada, truly the first Arab Spring.

25 years later, the Arab Spring has swept across the Arab world, bringing an end to dictatorial and criminal regimes in Libya, Egypt, and Tunisia and soon in Yemen and Syria—regimes that are no less ruthless and criminal than the Zionist regime in Israel that maintains a brutal occupation on the Palestinian people.

The late Yasser Arafat and his lieutenant Khalil al-Wazir (Abu-Jihad), and perhaps the entire PLO leadership, were caught off guard when Palestinians in Gaza ignited the First Intifada in 1987 with civil uprising and general strikes spreading to the West Bank surprising Israel with its army of informers and Shin Bet. What was not so surprising was the merging of interests of both the Israeli and Palestinian leadership—both wanted to see an end to this popular uprising.

Yasser Arafat and the Palestinian leadership spent years neglecting Palestinian needs and interests, squandering tens of billions of dollars, with efforts characterized by failure and defeat to Palestinians in the Diaspora. With the First Intifada, Yasser Arafat noticed those Palestinians living under Jewish Occupation and a chance to go for another ride—a chance to stay in business.

Money poured in to the Occupied Palestinian Territories to hijack the Intifada, recruit membership into Fatah, to take over and influence the uprising. Millions were also passed on to run and operate media and newspapers in support of Fatah and the PLO. All that paid off well in Oslo for both Israel and Palestinian leadership.

The Oslo Accords with its false hopes and lies killed any and all chances for the people to take to the streets in massive civil disobedience and uprising and put an end to the Jewish Occupation. Oslo was the product of an incompetent, corrupt leadership that was unable to negotiate an end to the Occupation. 20 years later, they are still at it, and the Occupation continues to be further entrenched, with no end in sight.

The Palestinian leadership is making sure there will be no Third Intifada—no Palestinian Spring—as this would bring an end not only to the terms of Oslo, but also to the Palestinian Authority, PLO, Fatah, Hamas, and to the many NGOs that are beneficiaries of the ongoing Jewish Occupation.

Many key people within the Palestinian Authority, the Oslo Team, its civil and security arms were recruited during the First Intifada and will not jeopardize the benefits and the VIP privileges they have under Oslo. They will not jeopardize these by helping to organize an Uprising…they are too busy spreading corruption to maintain their own survival.

The late Yasser Arafat thought he could outfox his Israeli partners and masters when he encouraged the Second Intifada, which was ignited after the provocative visit to Al-Aqsa Mosque by the leader who now rests in a permanent vegetative state, Ariel Sharon. The Israeli Army killed scores of Palestinians in September 2000 and an armed conflict ensued until 2005 when a truce was reached between Israel and the PLO leadership.

In contrast to the First Intifada, the Al-Aqsa Intifada saw the active and reckless mismanagement of Fatah and the PLO leadership, who led an uprising without a master plan, without objectives, and without discipline. Rather than challenging the Jewish Occupation and leading the uprising and organizing a march of millions of unarmed Palestinians to Jerusalem, the Palestinian leadership retreated behind the walls of cowardice.

For sure someone from within Fatah and the PLO leadership knew the whereabouts of Marwan Bargouthi and led the Israelis to his arrest. The Second Intifada was nothing short of total disaster.

Israel—with much vengeance—went on to destroy the entire infrastructure of the Palestinian territories, destroying every thing that donated and built by international donors. The whole world witnessed as Israeli tanks came rolling into Bethlehem, driving over parked cars and driving over light poles just for the hell of it. The Palestinians lost so much and continued to lose much as a result of the mismanaged Second Intifada.

The biggest loser was Yasser Arafat who went into hiding in his headquarters, abandoned by almost all of his Israeli, American, European even Arab friends, putting his fate and life in the hands of the very few friends he had left. There is a lingering question about whether his close associates slowly poisoned him or he died of natural causes? Perhaps the truth of his death would not serve his memory well. Yasser Arafat proved once again, he is the not a leader who leads, but a leader who manipulates for his own survival.

If the world expects the Palestinian leadership or the elites that are heads of the NGOs to lead the Palestinian Spring, it will have to wait for a long a time. All of these groups have too many vested interests in the continuation of the Jewish Occupation. A Palestinian Spring would bring international funding from donor countries to an immediate end. Too many would lose their VIP passes, chauffeurs, body guards, cooks, and house servants.

Palestinian Oligarchs who made financial killings out of their partnership with the Palestinian Authority and the Jewish Occupation would find themselves the big losers—as much of their investments are in the housing projects and in factories within Jewish Settlements.

The choice for the people could not be clearer. Either they wait for the leadership to take them through another 50 years of negotiations and futile international maneuvering, or they can decide to take the matters into their own hands and force both the Israelis and the Palestinian leadership to end this self serving game, and let them know that their time has simply run out.