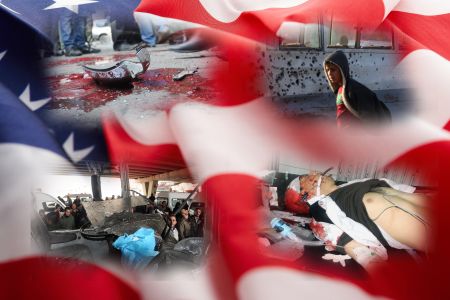 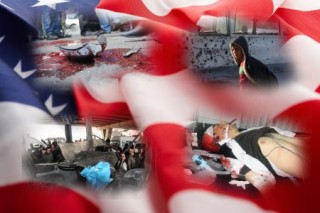 From the recent massacres happening in Iraq and Syria, one can gather that Washington has adamantly trodden on a path which is to be seen as a way to redefine the war in Iraq, an effective stratagem to bring the regime of Assad to its doom and recalibrate a comprehensive plan to topple the Islamic government of Iran.

Immediately coinciding with the withdrawal of US forces from Iraq, a coordinated string of deadly explosions gripped Iraq, leading to the massacre of dozens of civilians. On December 22, 2011, multiple bomb explosions happened simultaneously in Baghdad, claiming the lives of tens of innocent civilians. Another series of explosions targeted Shia Muslim pilgrims on Friday (January 6) and killed at least 71 people.

Most of the explosions which targeted the Shia Muslims are maliciously meant to inspire the feeling and doubt that it is a matter of sectarian violence, a plot devised by the US and its allies to justify that the Iraqi politicians are intent to provoke a ‘communal bloodletting’ which is gradually tearing the country asunder.

In fact, Washington is capitalizing on tension in the country and playing the sectarian card on the one hand and sending a message that Iraq is not capable of maintaining security and stability in the country.

As the situation stands, Washington is redefining the war in Iraq by fomenting chaos and commotion in the ravaged country with three apparent motivations: 1. to create the impression that the withdrawal of US troops was a mistake and that the country is plunging into mayhem with incredible rapidity, thereby justifying their debacle in the country. 2. To sow the seeds of sectarian war in Iraq which is home to various ethnic groups and religious sects with the express intention of re-installing elements from the executed dictator Saddam Hussein’s Baath regime which can undoubtedly safeguard the interests of the US government. 3. To devolve the war it lost to the care of the Saudi-backed Wahhabis, al-Qaeda members and Baathists who intensely champion and practice extremism, fanaticism and terrorism to the best interests of Washington. The pernicious trio, who work under the aegis of the CIA and Mossad, help tilt the scale in favor of insecurity, instability and division in the strategic Middle East region.

In parallel with the same fiendish practice, Washington has hired Saudi-funded mercenaries to orchestrate a selfsame scenario with more devastating consequences in Syria e.g. the toppling of the popular anti-Israeli government, eliminating one of the main Iranian allies and muscularizing the Zionist regime in the region. Needless to say, the more political and military muscle Israel flexes in the Middle East, the interests of Washington are guaranteed as they are both cut from the same cloth with common interests and political ideology.

On Friday (January 6), an unknown attacker detonated explosives at a traffic light in the densely populated neighborhood of al-Midan in Damascus, killing at least 25 people mostly civilians and injuring dozens of others. There is fear that the toll will increase as some of the injured are in critical condition. Syria blames al-Qaeda for the terrorist attack.

Another terrorist attack of this nature happened about two weeks ago (December 23, 2011) when two bombings killed at least 44 people outside Syrian intelligence buildings.

When scrutinized closely, one can see that the West has enough reason to contribute to violence in Syria as Arab League observers announced upon their inspection of the city of Homs which was portrayed to be the scene of extreme brutality by Assad’s security forces, concluded that there was nothing ‘frightening’ in the city, implicating that Western media have inserted their familiar sensationalism into the issue. So, the Arab League’s report frustrated and disillusioned the West as they had never expected a report of such substantial positivism.

Besides, the popular uprisings against US-installed despots have radically diminished the power of the US government and the Israeli regime. In fact, with Arab Spring gushing in any Muslim country in the Middle East or North African region, the Israeli regime is more entrenched in political isolation and alienation.

The truth is that the US is already destabilizing the Middle East region single-handedly and conducing to a regional crisis.

To crown it all, Washington is trying to downplay the constructive and peaceful role of the Islamic Republic in the region and shift all the blame for insecurity on Iran. Given the fact that the hawks in the White House are markedly toning up their war rhetoric against the Islamic Republic and Washington’s indefatigable and multifaceted efforts to demonize Iran and author a nuclear fable of horror, it has now transpired that they have no intention other than launching a military strike against the country and consequently turning the Middle East into a graveyard and reaping the benefit of their ill intentions.

Violence breeds violence. With crisis brewing in the region, Washington will be better able to fish in troubled waters, fulfill their long-cherished dream of exercising control over the Middle East by eliminating Iran which still stands tall in the face of threats.

Iran is planning to hold new military exercises in the Strait of Hormuz and their previous announcement that they would close the Strait if oil sanctions are imposed on the country is not to be taken lightly. Only recently, the European Union called for oil sanctions against the country, an act which has been interpreted by Iranian officials as ‘economic war’. This comes at a time when Israel and the US are planning to conduct extensive joint maneuvers in the region. The naval commander for the Islamic Revolutionary Guards Corps (IRGC), Rear Admiral Ali Fadavi, said the drill to be carried out in February would be ‘different compared to previous exercises held by the IRGC’. However, the details of the military drills have not yet been announced.

It is apparent that Washington and Tehran are at crossed swords now and one cannot recall a time when Tehran was so boldly defiant in the face of the US cudgel-brandishing policies.

However, it seems that Washington has never before relieved itself on solid ground. Iran is not Afghanistan; nor is it Iraq. Iran is a country with a super powerful military, many aspects of which are not yet known to Washington. So, the US hawks had better think twice before putting their diabolically expansionist plans into practice or else they will soon realize on what miscalculated, misguided, and misinterpreted grounds they had built their presumptions about Iran.