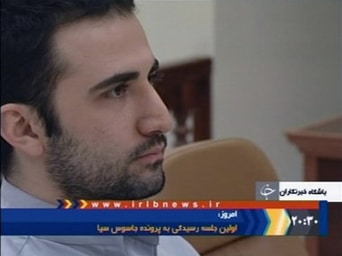 Iran has a creative opportunity to slow the cycle of deteriorating relations with the U.S. by reconsidering the death sentence of a former Marine it just convicted as a CIA spy.

The  former military translator was born in Arizona to a family of Iranian origin and graduated from high school in Michigan, where his father, Ali, is a community college professor in Flint.

According to Al-Jazeera, a branch of the Tehran Revolutionary Court convicted Hekmati of “working with a hostile country, belonging to the CIA” (and) “trying to accuse Iran of involvement in terrorism.” The court found him to be “a fighter against God,” and one who “spreads
corruption.”

Hekmati’s father insists his son is innocent of spying charges and was employed by a U.S. military contractor in Qatar that did work for the Marines. He said Amir was only in Iran to visit his grandmother.
That may be the case but it is also a matter of record, as journalist Seymour Hersh has reported, the U.S. has “boots on the ground” in Iran.

In the last three years, the UK “Daily Mail”reports, “Iran has suffered a series of setbacks in a covert war led by the U.S. and Israel. These include the assassinations of its nuclear scientists, explosions at missile and industrial facilities and a computer virus that sabotaged uranium enrichment plants.”

Although duly convicted in a court of law having the authority to impose the death penalty, Hekmati’s execution would feed a covert cycle of terror and disruption instigated by the U.S.

(It should be remembered the CIA, with the approval of President Eisenhower, overthrew by force and violence the elected government of Iran in 1953 to install a dictator favorable to western oil firm
interests. This was at a time when Iran had no nuclear development underway, unmistakably revealing the true U.S. interest in Iran to be control of that nation’s oil production.)

Sparing Hekmati’s life would be an act of grace on the part of Iran in accord with the inspired teachings of the world’s great religions. It would be visible proof that Iran adheres to a higher standard than the Central Intelligence Agency, notorious for its indiscriminate drone killings and assassinations. It would also provide an opportunity for restorative justice—allowing Hekmati to get to know the common humanity of the people of Iran while working off his debt to Iran in a constructive way.