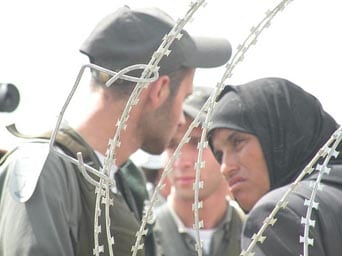 Check out these videos of Israeli soldiers at a Machsom (Security Checkpoints). The behavior of these soldiers raises serious questions about “Jewish values” promoted by the Israeli state. These are values that are promoted and sponsored by key American politicians and leaders of Christian Evangelical movements. There are over 550 of these Machsom that control the daily movement of some 3 million Palestinians.

I say “Jewish values” and not “Israeli values” because of the terminology utilized by Israel itself, as well as by its biggest supporter, the United States. In the US, President Obama (see union for reform Judaism speech), in addition to leading presidential candidates like Romney, Perry, Bachmann, Santorum, and Gingrich, the majority of members of Congress, their mentors and sponsors in Tel-Aviv, AIPAC, and the many Zionist workshops in Washington always refers to Israel as the Jewish State. Israel refers to itself as a Jewish State, and insists on preserving the “Jewish character” of its state. So, if all want and insist on a “Jewish State,” then the behaviors of such a state (however unfortunately) have come to reflect on Jewish Values.

True, there are many brilliant persons in law, science, technology, music, philosophy, cinema, social sciences who are of the Jewish faith, secular and non secular who have made great contributions to world civilizations over the centuries, who enriched and made this world a much better place. I must mention here the many Jewish scholars and philosophers also enriched and contributed greatly to Islamic civilizations during the Umayyad, Abbasid, Fatimid, Ottoman, certainly in Moorish Spain. Zionism does not reflect these contributions, in fact, it detracts from them.

Despite these contributions, what we have seen and witnessed since began with the immigration of early European secular Zionist “Jews” and a subsequent war of terror waged against indigenous people of Palestine to drive them out of their homes into exile. Many wars waged against the Arabs followed—from Tunisia, Lebanon, Iraq to Syria, Jordan, and Egypt…and the most recent atrocity in Gaza speaks shamefully of what the State of Israel considers “Jewish values.”

We witnessed the State of Israel’s “Jewish values” at their best when thousands of Israelis stood across the border from Gaza, cheering as they watched their Jewish Army unleash a vast array of American supplied weaponry in its “Operation Cast Lead” against the people of Gaza. A large number of American Jews went to the streets of New York City cheering their Jewish Army, and the US House of Representatives voted 390-5 in favor of H. Res. 34, in support of the ruthless Israeli military operation in Gaza.

One only needs to recall the live action on television with dead bodies lying everywhere and the sky lighting up from Israeli tank fire, missiles and rockets. Israel waged its war with the blessing of the Bush White House—a criminal war resulted 1,400 deaths, an overwhelming majority of which were civilians. Al Jazeera published the names of 210 out of at least 300 child victims, 44 under the age of five. This war caused the destruction of some 30,000 homes, destructions of hospitals, schools, orphanages, power stations, and its victims saw the use of chemical weapons and phosphorous bombs against them. In this war we saw the deliberate targeting and shelling of the entire family of Palestinian physician Izz el-Deen Aboul Aish, his three daughters murdered even as he spoke to Israeli television.

The deliberate campaign to humiliate Palestinians young and old, men, women, and children, is standard operating procedure at these Machsom, where Palestinians have to wait long hours if not days to go just a few kilometers to return home from their fields or to visit a neighbor or family. YouTube is full of stories on video posted by organizations and individuals that monitor the behaviors of these Israeli soldiers. I recall the instance when young teenage soldiers manning the Machsom at Hawara (Nablus) forced thousands of Palestinians to wait while they forced a young Palestinian to play the violin for their entertainment. Once they got their kick out of the show, they allowed the waiting people to pass through. Of course, the Israeli military command never took any disciplinary actions, in fact such behavior is part of the educational indoctrinations of the Jewish Army.

Well, I guess land confiscation and land theft, the destructions of homes, destructions of farms, poisoning of water wells, killing of farm animals, uprooting of century old olive trees, and forced evictions of Palestinians from their homes in East Jerusalem and we have seen over and over in Sheikh Jarrah are all evidence that speak to the “Jewish values” of this “Jewish state.” I am not so sure that a single decent human being would accept to share these values.

I am not so sure if America or Americans want to share the values of this “Jewish state.” I am not so sure that a single decent Jew would accept the Israeli use of the term “Jewish” in its attributions to values that sanction such damaging and morally reprehensive behavior.

It is rather difficult to comprehend that such criminal behavior is nurtured and encouraged and modeled by the most “moral army in the world,” encouraged and taught by Jewish Rabbis within the IDF. It is difficult to comprehend the Israeli definition of “Jewish values,” which according to Israel allow the teaching of hate, racism, and contempt for others, teaching Jewish citizens and soldiers that their lives are more important than others or that “goyem” purpose in life is to serve the Jews. So if these are Jewish values, then yes, I do question them. I question whether these were the Jewish values that Moses had this in mind when G-d entrusted him with the Ten Commandments. For sure in the case of Israel it is clear that the Ten Commandments have simply disappeared from all Jewish Values.

Perhaps it is time for the American people to look closely at their “best, closest and only true ally” in the world. Perhaps our politicians need to think twice before they commit our country and soldiers to another war for and on behalf of Israel. Perhaps it is time to question the many wars waged for an ally that murders our soldiers, conducts aggressive espionage operations against us, bankrupts us, and has nothing but contempt for our leadership and politicians, and indeed for our nation.

The sad, tragic and truly insulting from all of this, are decisions by the Palestinian leadership that benefits from some 3,000 VIP passes allowing senior PLO/Fatah/PA officials and their families to zip through these Machsoms, while millions of Palestinians have to put up with the daily humiliations and cruelty of Jewish soldiers enshrined with “Jewish values.” The Palestinian leadership, like the occupiers of its nation who man the Machsoms, has no sense of shame and nothing but contempt for its people who continue to suffer.