Home Veterans Should the EU Break with Israel

The imprisonment and collective punishment inflicted on the civilian population in the overcrowded enclave of Gaza continues without let-up.

For example, those whose children were killed or maimed by Israel’s murderous blitzkrieg 3 years ago (Operation Cast Lead), and whose homes were destroyed, have received no response to the criminal complaints submitted on their behalf by the Palestinian Centre for Human Rights. Not only that. They are still subjected to air-strikes, shelling or sniper fire on an almost daily basis, and live in constant fear.

1,419 Palestinians were killed during Operation Cast Lead, 82 percent civilians. A further 5,300 were injured. Israeli forces directly targeted and attacked private homes and civilian institutions, including hospitals and schools. PCHR says it has submitted 490 criminal complaints to the Israeli authorities on behalf of 1,046 victims. “To-date, only two substantive replies have been received. The overwhelming majority of complaints have been simply ignored.”

How would that sit with you if the same thing were to happen in the leafy suburbs of London, Paris, Berlin or New York?

The strangulation also continues. In theory there are four crossings through which vital supplies can be brought in from Israel and beyond (including the occupied West Bank) — Sufa, Nahal Oz, Kerem Abu Salem and Karni. Only Kerem Abu Salem, a small crossing in the south of Gaza, has been allowed by Israel to operate on anything like a normal basis, say reports. Elimination of crossing tightens noose on Gaza

Since the closure of Karni last March, the Israelis have made sure that all goods brought into the Gaza Strip have to go through the Kerem Abu Salem crossing. The capacity of this crossing, as you might have guessed, is insufficient for needs and its location means longer distances, longer journey times, higher fees and higher costs for Gaza’s merchants. And of course those extra charges have to be passed on. Now I read that the Karem Abu Salem crossing is to be demolished.

The Erez crossing (to Israel) remains open but most traffic has been moved to Rafah crossing (to Egypt), reducing natural movement between Gaza and the West Bank. The overall ban on exit and entry is still in place.

For UN local humanitarian staff Israel is approving fewer permits than before the promised “easing”, while permit policy for aid workers and medical patients remains arbitrary, unpredictable and time consuming.

The report also says the near-total ban on exports continues, with 2011 exports running at less than 1% of pre-blockade levels. “In 2011 to date, only 196 trucks of exports have left Gaza. This is only 14 more trucks than in 2010 and far below the 25,480 truckloads of goods needed annually to meet pre blockade export levels. It is also significantly less than the 400 trucks of exports promised each day under the 2005 Agreement on Movement and Access.  4 truckloads of strawberries recently left Gaza between the 27- 29 November 2011. Before that, there have been no exports since May 2011 when 1 truckload of flowers was allowed to be exported to the Netherlands.”

For a long time Israel’s intention has been to impose a final separation between the West Bank and the Gaza Strip, even though the two are internationally recognized as one integral territory. Under international law everyone has the right to freely choose their place of residence within a single territory.

Israel’s separation policy includes not only a block on travel for work, for trade, for family reunion, for medical attention and for worship in Jerusalem, it also targets higher education by making it virtually impossible for Gaza students to reach the eight Palestinian universities in the West Bank. I’m reminded of Berlanty, a Christian girl from Gaza who was living in the West Bank and studying for her degree at Bethlehem University. She was about to sit her finals when she was detained at the Israeli checkpoint between Bethlehem and Ramallah after attending a job interview.

The self-styled “most moral army in the world” blindfolded and handcuffed Berlanty, loaded her into a military jeep and drove her from Bethlehem to Gaza, where she was dumped in the darkness late at night and told: “You are in Gaza.”

The West Bank remains cruelly occupied with dead-of-night raids and arrests, even of children. The Israel government continues to instal armed squatter-thugs in hundreds of illegal ‘settlements’, from where they swoop down to terrorise local Palestinian communities and destroy their crops and other property.

Israel as usual acts in defiance of all law and standards of decency. And as usual the international community does nothing except wring their hands and turn their backs in a funk.

It’s simple to understand. Play dirty and you get sent off.

If western governments weren’t so corrupt the answer would be obvious. Suspend Israel from the 1995 EU-Israel Association Agreement. The purpose of the Agreement is to promote (1) peace and security, (2) shared prosperity through, for example, economic co-operation, free trade and free movement of capital, and (3) cross-cultural rapprochement. It governs not only EU-Israel relations but Israel’s relations with the EU’s other Mediterranean partners – including the Palestinian National Authority. 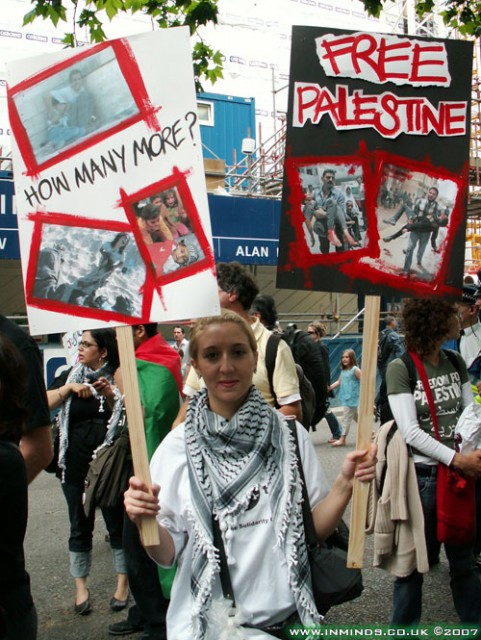 To enjoy these privileges Israel undertook to show “respect for human rights and democratic principles” set out as a general condition in Article 2, which says:

“Relations between the Parties, as well as all the provisions of the Agreement itself, shall be based on respect for human rights and democratic principles, which guides their internal and international policy and constitutes an essential element of this Agreement.”

This clause allows steps to be taken to enforce the contractual requirement regarding human rights and to dissuade partners from policies and practices that disrespect those rights. The Agreement also requires respect for self-determination of peoples and fundamental freedoms for all.

But Israel, with its racist and territorial ambitions, shows the same contempt for the rules of association as it does for international law.

From the outset it had no intention of playing the game. It relies on the power of the lobby’, the obedience of its stooges and the cowardice of the political ‘élite’ to deflect criticism, overcome objections and lean on the referee.

In 2002 the EU Parliament did actually vote to suspend the Agreement on the grounds of Israel’s violations of human rights. The resolution called for an arms embargo against Israel and Palestine, and condemned the “military escalation pursued by the Sharon government” and the “oppression of the Palestinian civilian population by the Israeli army.” The fat slugs in the EU Commission ignored the will of Parliament, and consequently there has been no improvement in Israel’s behaviour.

It’s time to try again, and to stomp on the unelected Commission if need be. Israel relies heavily on exports to Europe where it enjoys ‘favoured nation’ trading terms. So the EU could, at a stroke, end the evil occupation, the murder and the land theft, and perhaps resolve the whole problem in the Holy Land, by pulling the plug – as provided for under Article 2 of the Agreement – instead of continuing to reward Israel for its crimes.