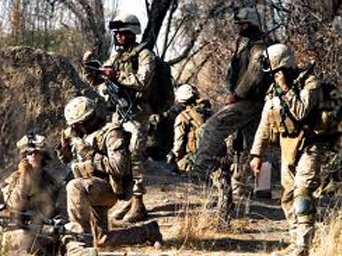 As many of you already know, I volunteer at the “National Veterans Hotline” a few nights per month.  The hotline website can be found at www.Veterans911.com     Last night, I was on duty for close to four hours and during that time I talked to over twenty callers.  90% of the callers had something to say about the story of Marines pissing on the dead Taliban.  Here are some of the comments I heard and then some of the emails I recieved since the incident of Marines pissing on Taliban.

Let me begin with some of the emails.  Here is one from a Navy corpsman, combat wounded in Vietnam named Bill.

O.K. it was pretty dumb for the Marines to demonstrate their contempt to the dead Taliban insurgents even more so because someone was stupid enough to video the event. But here’s my thoughts:  First of all FU*K the Taliban!  These Taliban assholes are responsible for providing shelter and resources to the 9/11 terrorists who planned  and executed thousands of Americans in the worst attack on the USA since December 7th 1941. These same Taliban sick religious extremists torture and murder their own people and continue to do so.  Marines haven’t beheaded anyone on TV!  Or beat the crap out of families for woman not wearing socks (and showing their ankles) or educating their daughters.  The Taliban have perverted, desecrated and destroyed the very own historic cultural symbols and history of their country.  Remember Hitler and the burning or books and art that the Nazi’s disagreed with?  What makes them any different?  The Taliban pay for their insurgency and weapons by fostering and encouraging the production and sale of heroin and opium.  This continues to destroy thousands of lives in their country and through out the world, including the United States.  It’s time these religious political extremists who hate – and want nothing more then to destroy our way of life and every single American- soldier or civilian – that there is pay back.   Show them the same respect they show their own kind and the coalition forces.  O.K. it’s not what we expect from the all volunteer professional armed forces, but I say in this case the hell with political correctness.  As a combat Vietnam Veteran I “understand” why the Marines did what they did.  I say chalk it up to Post Traumatic Stress Disorder.  Give them the counseling they need to understand what they did was not in our best interest and was pretty damn stupid.  Perhaps even a VA disability rating and let them go.  WE SENT THEM THERE AND THEY ARE US!  There is no doubt in my mind that secretly deep down every American political and military person involved in the war, as well as those Americans who have lost someone on 9/11 – or – in the War On Terror, including Afghanistan families, have the same feeling towards the Taliban that the Marines showed to these dead criminals.  FU*K THEM.

Here is another email from another Marine named Jim.

Jar-heads, christ, what the hell were they thinking?  I saw the video and while at first it made me mad, there was another part of me that said Yeah, get some.  I know two Marines who bought it in Iraq and its the same thing in Afghanistan, these Taliban yahoo’s kill anything, do anything and when we get um, well, we piss um off I guess.

I have maybe another thirty or so emails, and most reflect the above sentiment.

In the calls I took while working the hotline, the general concensus was that while the act was deplorable, the hatred of the Taliban by the callers overpowered the act by the marines.  Here are some of the comments I wrote down as I was speaking to veterans and family members of veterans.

Now, there were some other callers who were outraged.

I have seen the video myself a couple of times and have my own feelings about what happened.  Take a look yourself and tell me your thoughts.