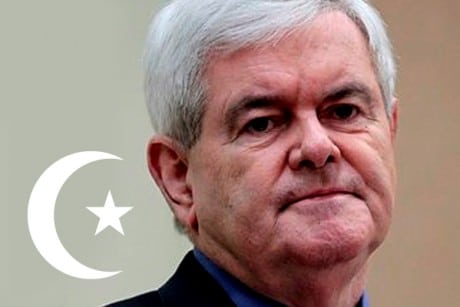 I am writing to volunteer to step in as your new chief campaign adviser, now that your former staff, followers, and prospective voters have deserted you in disgust. I believe I can devise a strategy that will not only get you elected President, despite your recently-revealed foibles, but perhaps even lead to a far more powerful position.

As a Muslim free-speech fanatic, I may seem an unlikely candidate for chief Gingrich advisor. After all, you are on record calling for a “long war” against Islam that will require the US to abrogate its freedom of speech and religious liberty: “This is a serious long-term war, and it will inevitably lead us to want to know what is said in every suspect place in the country…We will adopt rules of engagement that use every technology we can find, to break up their capacity to use the Internet, to break up their capacity to use free speech.”

Newt, the time has come for you to do your last, best political flip-flop: Stop being a Constitution-shredding Islamophobe, and recognize that there’s a freedom-loving Muslim inside you that’s just waiting to come out.

Not long ago, you told your wife: “You need to share me.”  That seems odd, since you’re a fanatic proponent of the Defense of Marriage Act, which defines marriage as “one man and one woman.”

Newt, if you want a “one man and two women” marriage, it’s doable. As a Muslim, you could conceivably marry up to four wives at once.

The only catch is that you’ll have to stop being such a greedy, narcissistic, corrupt, selfish, megalomaniacal asshole.

In Islam, you can’t marry more than one wife unless you are sure you can treat each of them equally well. That’s a tough order – especially since the Qur’an suggests that men CAN’T treat their wives equally well!

Newt, once you’ve come to Islam, and become a good, pious submitter-to-Allah, just think about the example you’ll set for your fellow Americans! The sleaziest douchebag in the country will have suddenly become a good, God-conscious worker-of-justice and persister-in-truth. People will be astounded; it will seem a miracle. Very quickly, the whole country will follow you to Islam.

Then America will elect you President.

And the Islamic world will elect you Caliph.

And you will have finally realized your ambition: “I have an enormous personal ambition.I want to shift the entire planet. And I’m doing it…Oh, this is just the beginning of a 20-or-30-year movement. I’ll get credit for it…”

The good news is that you will have shifted the planet towards good, rather than evil. The bad news is that once you’ve submitted to Allah, you will no longer be a megalomaniacal lunatic, so being Caliph will be a public service and a burden, rather than an ego-trip.

Sounds like a plan? Just contact me here at kbarrett(at)merr(dot)com and I’ll arrange for you to take shahada and begin life as a new Muslim.

Your future brother in Islam and Grand Wazir (insha’allah)