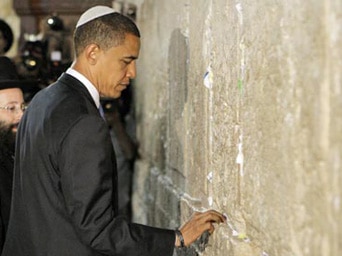 Last week, an obscure publication in Atlanta issued what seemed to be a “suggestion” that the Israeli government “eliminate” President Obama for “reasons of state.”

The argument made by an Andrew Adler, owner of the Jewish Times, a publication nearly a century old, has stirred much controversy?

Our question is, was Adler right in what he said?  Can Israel legally kill a president?

Point one, of course, Israeli law allows it.  Obama is a non-Jew and any non-Jew can be killed at any time according to Israeli law, even one living outside Israel if it is believed that he may some day cause harm to a Jew.

This is the legal basis for attacks on children in Gaza, that their deaths likely prevent them from growing up and harming Jews.

It is in the Torah and it is law.  Also, America has traditionally respected such laws.  In fact, President Obama may well have, through pro-Israeli statements, authorized his own execution.

Point two, American law including not only the Patriot Acts but the recent modifications of our constitution added to the National Defense Authorization Act of 2012 specifically authorize the use of deadly force if necessary should anyone, anywhere in the world, including US citizens, no exception made for the President of the United States, constitute or be believed to constitute a threat through support of or dialog with terrorists.

We have proof that President Obama has authorized dialog with the Taliban.  In doing so, his signature on the NDAA has him signing his own death warrant.

Recently, Shelden Adelson, billionaire casino boss gave Gingrich, laundered through a PAC (political action committee) $5 million.  This money is, as we understand it, a down payment on a much higher figure meant to buy Gingrich’s thralldom to the Israeli Likudist faction.

As we understand it, Gingrich will allow Israel to stage a false flag nuclear attack on Chicago and, if needed reinstate the draft in order to put together sufficient land forces to invade Iran.

Following this, the world will suffer a series of pandemics, which will be, in reality, germ warfare, with miraculous cures coming online in time to hold world population at approximately 2 billion.

It will be a new “black death.” This is the why, the deindustrialization of the west, the genetically engineered disease delivery systems, the failure of all currencies and institutions as they no longer will matter.

They no longer matter now, as seen by those who look on themselves as being from “on high,” most of us are simply walking corpses anyway, the living dead who don’t know enough to fall down.

This is also why Gingrich and his close backers adhere to apocalypse rhetoric although Gingrich himself is an atheist.

The interesting point about Obama is how he fell into the trap so easily.  Once one authorized rendition, one also legalizes the use of lethal force.  One cannot exist without the other.

Every time Obama or others doft the “beenie,” the yamuka, they admit their own doom, the death of the goyim who is no longer of use to the Jew as stated in the King Torah.

When the most despicable of the abuses of the Torah are then carried into American law and applied as “counter-terrorism” acts, kidnapping, detention and murder without accountability, the idea of an American president being cited for extermination by a Jew as being an offense enters the realm of absurdity.

If Adelman says Gingrich must win and for Gingrich to win, Obama must die, and opposing Adelman and Israel, or defying Gingrich is also “offending the word of g-d,” the the punishment of he who has no name is applied, as law states, with full righteous vengeance.

To a sane person, all this must seem strange.

So an American who studied history, to a veteran who has fought in wars, these concepts of world domination, murder on command and erasing billions of people must seem beyond offensive, in fact they sound insane.

Of recent years, these are the political theories of Henry Kissinger and George Herbert Walker Bush.

The Jewish part was thrown in to raise a few bucks, silence the liberals by dividing the Jews and to provide a stage for world conquest.

Without being able to blame Iran, there could be no new enemy.  Without the obsession with Israel, the idea of caring what Iran does or does not do seems meaningless.

So, why then must Obama die?  What does it prove?

This is the question.  In a world of powerlessness, can one man, one even so low as an American president, still make a difference, still alter history, still stop plans from moving forward?

Is this what Andrew Adler of the Atlanta Jewish Times telling us as a spokesman, continually denied by fellow Jews, but spokesman all the same, telling us?

If killing Obama is an answer to some then is crushing Gingrich the answer to saving the many?

If plans run deep as we suspect, billions to die, a planet cleansed of its human population as though they themselves were a disease, plans that show themselves only an inch under the surface, bio-weapons, chemical poisons, carefully engineered economic realignments for a world devoid of people, a world of workers and oligarchs, the obvious direction of so many years, can these plans be turned?  Is destruction of humanity inevitable?

Are we really just cattle?

Once it was said that when mankind began playing with the atom he had sealed his doom.  Oppenheimer had a quote involving “destroyer of worlds.”  He did have a flare for the dramatic.

Yet out we go with a whimper, as opposed to Oppenheimer’s “bang.”

We are legislating ourselves out of existence, passing laws against our own futures, our lives, so much more than simple freedoms. We have legislated the freedom to live into the hands of those we will never know.