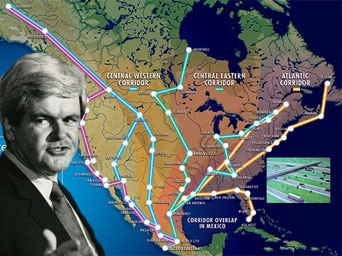 In the mid-1990s, when Newt Gingrich was destroying American Sovereignty by pushing the globalist agenda of NAFTAFA and GATT with major media help, my Radio Free America and Liberty Lobby were two of the most outspoken opponents.

At the peak of our outreach one of the most active stations was WAIM AM radio, Anderson SC; The home of Clemson University in the thick of the storied “Bible belt.” SC was also proudly the state of Controversial Senators Fritz Hollings, who battled the corporate bastards and Israel firsters courageously against the media thrusts of the day, and Strom Thurmond, who was not especially loved except by more racist rebel types. The pious oxymorons did not revile Thurmond from the pulpits.

Nevertheless, that is merely background. America was in a mostly hyped, false flag turmoil in 1994. This proved to be good cover for the globalist pincers. Bill Clinton (and his partner in dope running out of Mena, Ark. George H.W. Bush) were targets for my Radio Free America broadcasts, which vehemently loathed the Zionist sponsored “One world” agenda, and the lynchpin of all the chicanery—the Fed banksters.

Rick Driver, WAIM station manager, was a good ol boy with guts and brains, and he knew the local people, who did not care a whit for government and had the moxy to also despise the Federal Reserve banksters. My program thrust was vehemently opposed to the developing Neocon movement and the NAFTA monopoly pushed by The lying, leering Newt.

When the station featured a dinner/rally against globalism, we had a packed house. I was keynote speaker. This was after I had repented and claimed Christ, but I was still a babe in the word, and kept my mouth shut about it while learning. The Carolina folks were totally pissed at Bill Clinton’s glib infidelity, and he was an easy target. However, I recall that the anti-American NAFTAFA (North American Free Trade and Finance Agreements) pushed, pulled and backed by the rising chief neocon—Newt Gingrich was the greater enemy of the entrepreneurs and thinking people in the area.

Newt should be reviled for his Neocon sell out far more than for being a louse; A rotten husband is character flawed enough, Clinton proved that. But those of us who chronicled the fall of US sovereignty, at the time it was under direct invasion tried not to allow the false flags of Clinton’s egomania, and the huge false flag of abortion provide cover for Newt’s traitorous contract with America; the dawning of outsourcing important, backbone jobs. All for the sake of corporate robber-barons.

Were I a South Carolinian today, I would not want to show my stupid face. And fifty years ago I told the Editors who assigned my work to shove their lying agenda. Help me be humble.

It’s not my hubris, it’s the low level of competition, ask Duff.

Have you “progressives” seen this pandering video?

No wonder they want to kill Ron Paul.

But, why would any Zionist, Israel firster want to assassinate Obama? America is Oxymoronland in more ways than I can imagine.