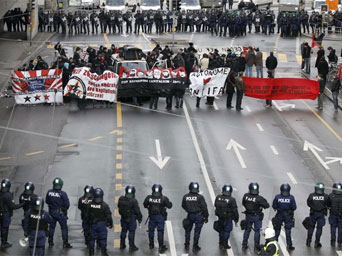 With the world in such an economic, financial, political, and social mess, as it has been for a number of years, one has to wonder what the role, purpose and mission of the World Economic Forum and the more than 5,000 “who’s who” in the worlds of finance, economy, politics and even the arts who meet over a period of 5 days in the Swiss city of Davos.

Having this World Economic Forum, as I see it, is like holding a conference of world leading experts in medicine, pharmacy, pathology, and radiology meet to review a patient, and after 5 days of diagnosis, are unable to conclude whether the patient is even sick or not, let alone recommend a treatment and a cure.

With 2,000 corporate members from all over the world, key executives of multi-national corporations, executives who work in banking, finance, hedge funds, electronics, consumers goods, and agriculture meet in discussions and panels with heads of states, with directors of central banks, with policymakers and shakers, with heads of leading NGOs, international organizations such as the United Nations, all of whom meet annually to discuss world’s economic affairs, simply failed to recognize or even forecast the collapse of the US financial and banking industry.

In just a few days more than 5,000 people will descend on the beautiful alpine Swiss city of Davos to attend the 2012 World Economic Forum. With costs running in the tens of thousands of dollars per participant, it is not a cheap conference. This must be why average citizens and taxpayers who certainly could not afford it are not invited, and have no place at such a conference.

Only those who can afford the fees are invited to attend. Of course the list of attendees includes the likes of Hosni Mubarak, businessmen behind bars or on the run, include dictators killed by their citizens, and many corporate raiders who killed and murdered well established corporations  (Yes corporations are persons and soon Texas will hang few of them).

Attendees also include hedge fund managers that looted the wealth and treasury of many countries around the world and those who bet against their own clients. It includes international bankers who took many countries, citizens and businesses down the drain through economic “shock doctrine” causing citizens and taxpayers in countries like Argentina, Mexico and others to lose everything.

Well, let us see what those meeting in Davos have to say this year and how they intend to cure the many ills and economic disorders they failed to forecast, but had no problem causing.