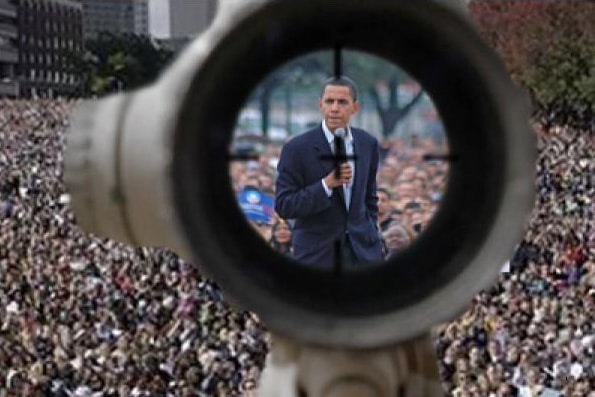 This last weekend brought with it some vile manifestations of Jewish politics in its most horrific forms.

United Against the Goyim

In the USA, the owner and publisher of the Atlanta Jewish Times, Andrew Adler, suggested that Israeli Prime Minister Benyamin Netanyahu should consider ordering a Mossad hit team to assassinate U.S. President Barack Obama so that his successor will defend Israel against Iran.

Actually, it wasn’t just Obama whom Adler suggested to eliminate, the Atlanta Jewish Times listed three lethal options to help Israel counter Iran’s nuclear capability. The first, to launch a pre-emptive strike against Hamas and Hezbollah, the second to attack Iran’s nuclear facilities and the third is to assassinate the current American president.

“may his name and memory be blotted out”.

Without comparing president Obama to Jesus, Adler’s homicidal inclination is somewhat similar. Seemingly, some Jews have yet to forgive Jesus – nor President Obama. .

– a pretty bizarre reaction, considering  that the American Jewish Committee is itself an enthusiastic advocate of a war against Iran. Similarly, warmonger Alan Dershowitz listed recently the ‘legal’ reasoning behind an Israeli attack on Iran. True, he has yet to call for an American President to be murdered, he just thinks that launching another world war is a ‘reasonable’ thing to do. And, as far as I can remember, the American Jewish Committee didn’t rush to denounce Dershowitz or to apologise on his behalf or in the name of the Jews.

In Britain, following some relentless Jewish Lobby pressure, Press TV, The Iranian News Channel was forced off the air after Ofcom  (The ‘Independent’ regulator for the UK Communications Industries), revoked its licence for ‘breaching the Communications Act’. This should come as no surprise. Bearing in mind that 80% of British Tory MPs are Conservative Friends of Israel, we in Britain must expect the rapid fading away of some of our most elementary freedoms.

On Saturday the Islamophobic blog Harry’s Place and the Zionist mouthpiece Jewish Chronicle completed their takeover of UK Palestinian Solidarity Campaign (PSC). In the last two years, the PSC EC has expelled and marginalised some of its leading intellectuals amongst them some prominent Palestinian and Muslim activists and now, at last, they are beginning to receive their just credit.

In the last two months we have noticed that the PSC has been praised by both the notorious JC and Harry’s Place. Two weeks ago, pro-war Harry’s Place thanked the Jewish ‘anti’-Zionists for promoting Jewish tribal interests at the midst of the Palestinian Solidarity Campaign and this weekend a PSC Executive member confirmed that PSC’s latest maneuvers against ‘anti-Semitism’ were in response to criticism from the rabid Zionist website Harry’s Place and the Jewish Chronicle. Like others, I am confused.  Should a Palestinian solidarity group surrender to an Islamophobic blog, a Zionist paper and other ‘Jews-only’ pressure groups?

Judging by the scale of the  celebration on Islamophobic Harry’s Place, you’d be forgiven for assuming that PSC – now firmly committed to the struggle against anti-Semitism and Holocaust denial – is now just one more Zionist outlet, whose prime interest is in promoting Jewish tribal interests. I’m sure that the Palestinians in besieged Gaza and in refugee camps all over the Middle East are over the moon.

However, to counter the now complete Zionist takeover of PSC EC, a bunch of leading solidarity  activists, journalists and intellectuals have launched deLiberation, a new UK dissident magazine. We aim to become a leading UK media outlet, to provide news, analysis and fearless criticism – exactly where The Guardian and the BBC so miserably fail. And we will fill that space now created by the current PSC Executive Committee.

United Against The Guardian

Two days ago, I discovered that CIF Watch, a Jewish supremacist site interested solely in cleansing British press of any criticism of Israel and Jewish power, was boasting that the Guardian surrendered to their pressure and

“The Jewish state is pretty devastated by the idea that a bunch of ‘indigenous Arabs’ are far more technologically advanced than its own chosen cyber pirates.”

Specifically, it didn’t approve of the Guardian printing the word ‘chosen’ in reference to Jews.

The CIF Watch site says of itself that it is

Comment is Free’ blog.” So, it is not against racism or discrimination in general, but solely interested in matters to do with one group and its tribal interests.

Three months ago I published ‘The Wandering Who’. This book presented a harsh criticism of Jewish identity politics, Left, Right and Centre. It openly argued that contemporary Jewish identity politics is exclusivist, in most cases, racially driven and, in many ways, is a threat to world peace. In some ways, as in Adler’s call to assassinate Obama, it actually also endangers Jews.

The book attempts to grasp the bizarre continuum between Israeli barbarism, Adler’s homicidal inclination, the PSC EC surrender to rabid Zionist bodies and the ‘Guardian’s regulation’.  The book points to the political culture that made Jewish identity politics so powerful and, at the same time, so blind. And in spite of a united front’s attempt to silence the book and its message, in just a short space of time the book sold thousands of copies and its message is spreading like a forest fire.

I’m not one bit surprised by the surge of Jewish power. I wrote a book about it. But, being intimately familiar with Jewish history, I know exactly where it will lead. Jewish political arrogance has always proved to be, above all, devastatingly dangerous for Jews.

For the sake of peace, both Jews and gentiles must confront the prominence of Jewish identity politics. We should never be afraid to question ideologies and lobbies that impose a threat to peace, our value systems, freedom of thought, humanity and humanism..

Gilad Atzmon’s New Book: The Wandering Who? A Study Of  Zionist’s global interests Amazon.com  or Amazon.co.uk.