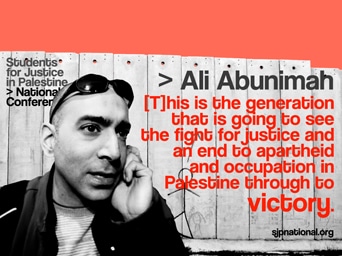 No real change can occur in the undeniable reality of the ruthless oppression practiced on all Palestinians by Zionist Israel without US support.  So, how do we change the subservient attitudes of 70% compromised American Congress?

Here is what Ali Abunimah, wrote this weekend in the  Philadelphia Inquirer:

Point Counterpoint: Aim to Promote Human Rights of the Palestinians

I am coming to the University of Pennsylvania this week to incite violence against the State of Israel – pro-Israel groups and commentators have contended – and, along with hundreds of students and other speakers who will attend the 2012 National Boycott, Divestment, and Sanctions Conference, to engage in an “act of warfare.”

Nothing could be further from the truth.

In fact, we are coming together to push forward an inclusive movement that supports nonviolent action to promote the human rights of the Palestinian people, because only full respect for these rights can lead to peace. Today, millions of Palestinians live without basic rights under Israeli rule. This intolerable situation is at the root of problems that affect the whole world.

People everywhere, whether they consider themselves “pro-Israel” or “pro-Palestinian” or both, want to see justice and peace. Yet, in recent years, the U.S.-brokered peace process has seen failure after failure.

Amid election-year politics, President Obama and his Republican rivals are pledging ever more unconditional support for Israel, even as Israel openly flouts U.N. resolutions and U.S. policy by building Jewish-only settlements on Palestinian land and depriving Palestinians of their rights, including hundreds of children who languish in Israeli military prisons.

There’s no chance that the United States will use the billions of dollars it gives Israel in aid as leverage to compel an end to these practices and respect for Palestinian rights. So should we just give up?

The answer from Palestinian civil society is a clear “no.” All of us can play a role in ending this terrible situation and securing equal rights for Palestinians rather than superior rights for Jewish Israelis.

In 2004, the International Court of Justice in the Hague, Netherlands, ruled that the wall Israel built across Palestinian lands in the occupied West Bank was illegal and was aimed at confiscating more land. Frustrated by the inaction of governments, 170 Palestinian civil society organizations, including labor unions, student groups, and cultural and social organizations, came together to issue the Palestinian call for Boycott, Divestment, and Sanctions (BDS) on Israel in 2005.

Modeled explicitly on the tactics used to help end apartheid in South Africa, Palestinians urge that Israel be sanctioned until it respects Palestinian rights and international law in three specific ways: an end to the occupation of all Palestinian lands seized by Israel in 1967; full equality for Palestinian citizens of Israel; and full respect for the rights of Palestinian refugees.

This call doesn’t prescribe a specific political solution – for example, a single democratic state, or a two-state solution – but it recognizes that full rights have to be at the core of any resolution. And implementing these rights does not threaten any legitimate rights of Israelis, unless one considers discrimination against Palestinians simply because they are not Jews to be a “right.” In just the same way, granting full legal and political rights to African Americans in the United States did not threaten any legitimate rights of white citizens.

The all-too-frequent claim that the BDS goal is to “destroy Israel” or “incite violence” – rather than win rights – or that it is motivated by “anti-Semitism,” is just as offensive and simplistic as saying that participants in the Montgomery bus boycott wanted to “destroy Alabama” and simply “hated white people.”

And just like that celebrated bus boycott, BDS is not an end in itself; it is a tactic designed to bring about change. As Archbishop Desmond Tutu wrote in support of a divestment effort on behalf of Palestinian rights, “We could not have won our freedom in South Africa without the solidarity of people around the world who adopted nonviolent methods to pressure governments and corporations to end their support for the apartheid regime. Faith-based groups, unions, students, and consumers organized on a grassroots level and catalyzed a global wave of divestment, ultimately contributing to the collapse of apartheid.”

But let us remember that in the 1980s, not everyone supported sanctions on South Africa. President Ronald Reagan and British Prime Minister Margaret Thatcher were strongly opposed to sanctions and insisted on “constructive dialogue” that went nowhere, just like the U.S.-brokered Middle East peace process. What helped turn the tide in the United States was a young member of Congress who broke ranks with Reagan to support boycott and sanctions on the apartheid regime. His name was Newt Gingrich.

Tragically, Gingrich today notoriously contends that the Palestinians are an “invented people” – a way of suggesting they have no rights, and certainly no claim to the land they’ve tended since long before Israel existed.

As the growth of such extremist rhetoric diminishes the chances for a constructive U.S. role, it is all the more important that we as citizens take action. That’s what our conference is about, and everyone who shares a belief in human equality is welcome to attend.

Ali Abunimah is the author of One Country: A Bold Proposal to End the Israeli-Palestinian Impasse. The BDS conference is scheduled for Friday to Sunday at the University of Pennsylvania. To attend Ali Abunimah’s keynote address at 7 p.m. Saturday, visit pennbds.org. Admission is free to members of the Penn community; $5 for others.

The agenda for the overall program is at: pennbds.org/about/program

“The last time I spoke to Obama was in the winter of 2004 at a gathering in Chicago’s Hyde Park neighborhood. He was in the midst of a primary campaign to secure the Democratic nomination for the United States Senate seat he now occupies. But at that time polls showed him trailing.

“As he came in from the cold and took off his coat, I went up to greet him. He responded warmly, and volunteered, “Hey, I’m sorry I haven’t said more about Palestine right now, but we are in a tough primary race. I’m hoping when things calm down I can be more up front.” He referred to my activism, including columns I was contributing to the The Chicago Tribune critical of Israeli and US policy, “Keep up the good work!”

It should  come as no surprise that the much-missed  late Edward Said  Palestinian advocate  and close observer of American politics remarked during his time:

“I have tried to impress on the PLO leadership, and every Palestinian or Arab I have met, that the quest for a protector in the White House is a complete chimera, since all recent presidents have been devoted to Zionist aims, and that the only way to change US policy is through a mass campaign on behalf of Palestinian human rights, out-flanking the Zionist establishment and going straight to the American people. Uninformed and yet open to appeals for justice as they are, Americans are capable of reacting as they did to the ANC campaign against apartheid, which finally changed the balance of forces inside South Africa.” – Edward Said, 2002 (See: America’s Last Taboo)

No real change can occur in the undeniable reality of the ruthless oppression practiced on all Palestinians by Zionist Israel without US support, we think though, that the international community has the ability to pressure the United States. If Europe, Australia and Canada were to recognize Palestine and voice support for Palestinian human rights this would exert considerable pressure on the US to shift its position by first and foremost withdrawing its massive financial support for Zionist Israel.

So, how do we change the subservient attitudes of 70% compromised American Congress?

The best way to combat the absurd attitudes of these elected American representatives, as Edward Said adviced — to take the case directly to the American public by relentlessly educating the public about the massively aggressive behaviour of Israel, the powerful influence of its Lobby (AIPAC) and the costs to the American interests for supporting Israeli aggression.

The Council for the National Interest is a recently launched well designated website and resource now available to activists for Palestine and those activists and activist writers and editors that seek to encourage and promote a U.S. foreign policy in the Middle East that contributes to a just solution of the Arab-Israeli conflict.

Australia and Canada are also experiencing undue influence of the Israel Lobby right now, the recent vote against Palestine’s membership at the UN is a glaring example.

It is my contention that the situation described in most of what we see today describes the nature of the cancer which corrupts and is killing peace in the Middle East. Walls, Wars, Political Parties, Treaties, Road Maps, Plans, petty wars, and pretenses of War, Assassinations, bombings and kidnappings, Military actions, and “historical” arguments are all merely manifestations of the symptoms of the cancer, the bursting boils and pustules, if you like! And that, until the source of the illness is recognized, diagnosed, and treated, that all the Band-Aids, punditry, bullshit, conferences, hearings, Summits and Tours of Heads of State and other important trollops,liars and deceivers, Band-Aids, are not going to cure a damned thing.

Every written analyses, description, plaint, complaint, plan, solution, or pitiful lament, must come to grips with this major issue, open the wound for inspection, show it to the public for what it is, and demand action which bears directly on the problem, not on its peripheral fallout. Treat the disease, not the dandruff!

Otherwise, we will go around and around, in ever tightening circles, much as Zionist Israel has intended, and led, us to do these past decades and centuries.

In his speech below Ali Abunimah articulates meaningfully the importance of the BDS Campaign strategy :