Home World What Role Did U.S. Play in 2010 Massacre in Jamaica? 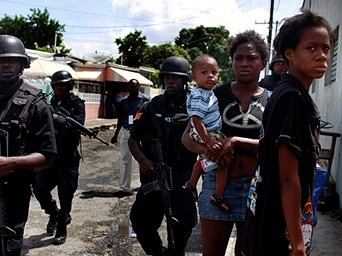 U.S. May Have Played Role In Jamaica’s 2010 Massacre

To what extent, if any, did the U.S. Department of Homeland Security(DHS) participate in the slaughter of scores of Kingston, Jamaica’s, Tivoli Gardens residents on May 24th, 2010?

The community was run by drug lord Christopher (Dudus) Coke, a self-proclaimed “president” wanted in the U.S. for drug and firearms trafficking.

When he would not surrender to authorities, the Army’s Jamaican Defense Force(J.D.F) and the Jamaican Constabulary Force(J.C.F.) breached the barricades Coke’s men had erected and gunfire erupted. Resistance was light and the defenders melted away. Unarmed residents who had not taken the opportunity to leave Tivoli by bus prior to the gunplay were not so lucky.

“No fewer than (73 civilians) were killed (as well as one soldier)” in the operation to get Coke, and three other community residents are missing, writes Mattathias Schwartz in last December 12th’s “The New Yorker.” .

Although Jamaican authorities say many of those slain were armed gunmen allied with Coke, they recovered just six guns during the assault and to this day “the Jamaican government has refused to make public what it knows about how the men and (three) women of Tivoli Gardens died,” Schwartz writes.

So has the U.S. government, even though a Lockheed P-3 Orion surveillance plane with an identifying DHS seal on its tail was flying above Kingston relaying live video of Tivoli to Jamaican forces on the ground, Schwartz notes. “The video could corroborate, or refute, allegations that members of the Jamaican security forces massacred dozens of innocents, and could help identify the alleged killers,” “The New Yorker” article suggests.

Investigators dispatched by Jamaica’s Prime Minister Bruce Golding were told by Tivoli women “of police shooting unarmed young men inside their homes, or dragging them out into the street and killing them,” Schwartz writes.

A DHS official confirmed to reporter Schwartz his agency had aircraft flying above Kingston and that “all scenes were continuously reported” and information turned over to Jamaican authorities. A U.S. Drug Enforcement Administration(DEA) spokesperson said, “We were absolutely not involved on the ground in any of the operations.”  A statement given to Schwartz by the U.S. State Department and DEA stressed U.S. law-enforcement officers at the American Embassy had not made “operational decisions” during the incursion.

But Schwartz writes, “The U.S. knew there was a risk of violence against civilians during the operation” as human-rights activists have long been collecting stories of J.C.F. excesses, “including officers indiscriminately firing on teen-age girls or crowded buses.”

In 2010, Jamaican police killed 320 civilians apart from those slain in the Tivoli attack, a figure 40 times as great as the New York P.D. which covers a population three times as large, and a UN report has noted “the propensity for extrajudicial killings by the J.C.F.”

Once the police gained control of Tivoli, “unarmed men of fighting age were interrogated on the spot, and more than a thousand were sent to detention centers, from which they were released a few days later,” Schwartz wrote, but “dozens allegedly (were) shot to death in custody.” Others, whose protestations of innocence were not believed, were shot to death on the spot in Tivoli by the police.

Meanwhile, Coke was nowhere to be found. Nearly a month after what Schwartz called “A Massacre in Jamaica,” Coke was caught by police at a roadblock and has been held since at the Metropolitan Correction Center in Lower Manhattan. He has pleaded guilty to racketeering and faces up to 23 years in prison, Schwartz writes.

But several scores of civilians are buried in Jamaica’s May Pen Cemetery in consequence of a deadly attack by Jamaican forces in which, for all its denials, the U.S. played a significant role and was perhaps more closely involved than it has let on.