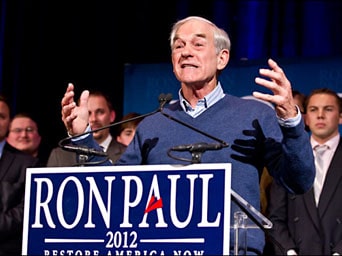 Watch this video of the MSNBC election night “experts” for a solid example of controlled media evil at work. There is a good chance you did not see it as MSNBC is the lowest rated of the cable news networks since the multitudes of oxymoron’s prefer Fox.

They are reporting one big fact from the Florida Primary election, that the only “Happy” candidate is Ron Paul, who did not waste time and money on Florida.

It is what the giggling pundit tells his audience about Ron Paul that is such an egregious lie that galls me.

Note, Matthews, a veteran of decades in Washington DC, who proudly boasts he once worked for Tip O’Neill during the Reagan era in order to give his leftist punditry an aura of authority.

We may assume that Matthews is educated and skilled in the bullshit of Washington, so he surely must know, that immense crap has hit the fan in this country since the collapse and bailout events at end of the hated GW Bush era.

With that in mind, ask yourself why he spins the establishment lies that Ron Paul is “wacky” with his obvious truth-telling about the Fed, and about the insane wars.

Note how this arrogant prick makes fun of the probable fact that Americans have no idea about Sarbanes-Oxley, the Law enacted in 2002 after the Enron scandal; in a belated, alleged effort to curb abuses. Ron Paul vows to repeal such vainglorious Laws and return Liberty to markets.

None of television’s pundits, who are hung up on the polls of the mindless voters, ever explain why Paul’s ideas are “Whacko”, because they cannot do so with any sense of logic or truth, only that the present establishment says so, while displaying a morbid fear of Ron Paul’s truths.

Surely Matthews knows that Ron Paul has made his case against the criminal monetary policies of the private banker cartel, If he doesn’t he should turn in his pundit badge. Also, how the hell does Matthews miss the fact all politicians are sellouts to filthy lucre? When children grasp it in a minute?

This video report is a goldmine of truth about the mindset of this motor mouth pundit on the third string network; Even so, MSNBC reported the facts with more accuracy than Hannity, O’Reilly et. al.

The college kids carrying water for Ron Paul are ignoring their professors and following their instincts.

‘We ended up here at the wrong time’

Telegraph – Herald (Dubuque) August 8, 2011 | LAUREN EHRLER The Bries family was supposed to be back in Dubuque, safe and sound by Tuesday.

“We ended up here at the wrong time,” said Patty Bries.

John and Patty Bries had been with their daughter, Katie, in Europe, and due to a series of events, didn’t begin the final leg of their trip home until Wednesday evening. After more than 50 hours of being awake, the family just wanted to get home.

The Brieses were headed west on U.S. 20 from Rockford. From radar, it appeared that the storm system was clearing, and at a stop in Stockton, a truck driver that had come from Dubuque assured the Bries family that road conditions were “OK” to continue traveling. web site escape the car

However, as the family got closer to Dubuque, conditions worsened. Katie Bries urged her father to turn the car around or pull over – “I don’t think we should be on the road,” she said.

“We figured when we got to the bridge (in East Dubuque), we could stop there,” Patty Bries said.

However, the family never made it that far. Near Keiffer Body Shop, along U.S. 20, the car began to float. Water came into the car from underneath and the Brieses began opening the windows in an attempt to escape the car.

Katie went out first, then aided her parents out of the car. The family waded through waist-high floodwaters across the road to safety. Minutes later, they watched their car float away and nose down into the water. escapethecarnow.net escape the car

“I think if John and I had been there alone, I think we would have died,” Patty Bries said.

They knocked on a door and were taken in by Chester and Donna Smith, of East Dubuque. Together, the Smiths and the Brieses were able to help other people stranded in their vehicles to safety.

Although the Brieses were not able to salvage most of their luggage, including several family-protection crucifixes they had purchased at the Vatican, they are grateful that their biggest concerns are replacing electronics and the family vehicle.

“We can worry about that stuff because nothing happened to us,” Patty Bries said.