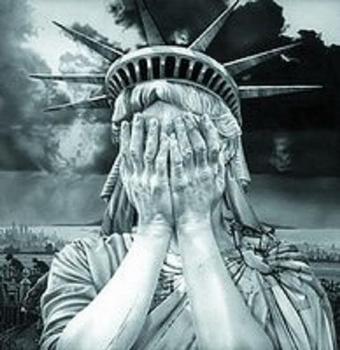 I’ve just about reached the middle of my list of forty things wrong with our country. My last article discussed the decline of the family unit, the dumbing down of education, and the attempt to rid us of our constitutional right to bear arms, relating all three to schemes used by tyrants to seize power.

America…still the bastion of freedom for the world; the defender of justice; the industrial leader for the past three centuries, but with a foundation that appears to be crumbling at its base, seems to be coming apart from the inside. This was foretold by the greatest of all Presidents…

“America will never be destroyed from the outside. If we falter and lose our freedoms, it will be because we destroyed ourselves”. Abraham Lincoln

If we fade into oblivion as a nation, who will pick up the mantle? Will it be the Chinese? How about the Russians? The United Nations? Perhaps it will be a joint coalition of countries of the current European Union. I doubt any nation can take our place in the type of leadership displayed by the United States.

As I listen to responses from the readers of my columns, read the thoughts of other writers, and simply observe what is going on around the country, I’ve come to the conclusion that there will be NO replacement for the United States. Without America the world will truly begin its march toward Armageddon, with an unbridled proliferation of nuclear weapons. There are many who would argue that point, but what other country in the history of mankind has spent so much blood in the cause of freedom? True to “human nature”, much of the world and many in the United States have a loathing for the successes we have earned since we became a country. They try to embarrass us at every opportunity, referring to the United States as “empire builders”, “the Satan of contemporary politics”, “the Great Satan”, and much worse. This is not just true from leaders of other countries and the miscreant Americans here at home, but even by our own free press, who have long since forgotten their duty as journalists to report the truth. Where there is success there will always be jealousy and where there is jealousy there will be hatred. The best weapon against jealousy and hatred is the truth while their only weapon is to lie. In 2002, Colin Powellsaid to critics of US policy…

“Far from being the Great Satan, I would say that we are the Great Protector. We have sent men and women from the armed forces of the United States to other parts of the world throughout the past century to put down oppression. We defeated Fascism. We defeated Communism. We saved Europe in World War I and World War II. We were willing to do it, glad to do it. We went to Korea. We went to Vietnam; all in the interest of preserving the rights of people. And when all those conflicts were over, what did we do? Did we stay and conquer? Did we say, “Okay, we defeated German; now Germany belongs to us? We defeated Japan, so Japan belongs to us”? No. What did we do? We built them up. We gave them democratic systems which they have embraced totally to their soul. And did we ask for any land? No, the only land we ever asked for was enough land to bury our dead. And that is the kind of nation we are.”

America is far different from Europe:

I am a writer of the truth. Some may not see it that way as there are always two sides to every issue. My current focus is on Veteran and Military issues, preferring to leave political controversies to others, but in today’s world all issues seem to be interrelated. Our federal government and the politicians who hide inside Washington have so perverted the very foundation of our country, it would be unrecognizable by those who founded it. Yet, it seems that with the current budget crisis, it is impossible to not enter into the political arena as nearly every veteran and military issue comes with strings attached. Of course no elected official in his right mind would admit it, but the power of government is no longer about the will of the governed, but has become a race to see how much dependency can be instilled upon the governed, so that permanency in office becomes the goal of those elected to lead. This was not what was envisioned back in 1776 when our Experiment in Government was laid down by the Founding Fathers, but they were astute enough to share their intimate wisdom with us…if only we would listen.

“The American Republic will endure until the day Congress discovers that it can bribe the public with the public’s money.” Alexis de Tocqueville (From Democracy in America)

The extensive Constitutional republic they envisioned, in reality, became a place of liberty and opportunity for countless millions of people from all over the world. The experiment has worked because the ideas put forth were based on enduring principles which recognized human imperfection and the need to structure a limited government of laws, dependent upon the consent of a people who, themselves, understood the principles. • Our Constitution acknowledged that individual rights are derived from a Creator. • Our rights are based on enduring principles compatible with “the laws of nature and of nature’s God”, and not granted by government. • The Founders knew all about human imperfection and that a tendency to abuse power is ever present in the human heart. • To limit the power of government through the remarkable document called the Constitu¬tion they carefully divided, balanced, and separated the powers granted to government and then delicately balanced them equally with a system of checks and balances. • Power was left to the people, except those which, by their consent, the people delegated to government ¬and then made provision for their withdrawing that power, if it was abused. They even foresaw the need for such protection by maintaining the God given right to self protection by the implementation of the 2nd Amendment.

When asked by a curious citizen after the adjournment of the Constitutional Convention what kind of government had been structured by the Founding Fathers, Benjamin Franklin is said to have answered: “…a republic, if you can keep it”.

By comparison yesterday’s Founders were far more brilliant than today’s politicians. The U.S. Constitution contains just 34 Articles and is comprised of just 4543 words, while the still non-ratified Constitutional Charter of the European Union contains over 200 articles and exceeds 250 pages in length. I believe this to be the propensity of politicians to micro-manage all phases of government with minute detail that only a bureaucrat can understand. So…how have we strayed from the path of righteousness? As Andrew Jackson observed: “It is well known that there have always been those amongst us who wish to enlarge the powers of the general government…and…overstep the boundaries marked out for it by the Constitution”. The very nature of bureaucracy is to try to expand influence and power which become so entrenched as to be unchangeable without herculean measures. Add to the creeping desire for power of the central government the deterioration of society by the ever increasing dependency upon government for that which should be done by the individual, and we have a formula for the demise of our way of life. The saddest of all realities however, is that we have allowed our way of life; our freedoms; our independence; to be stolen out from under us by those we elect to hold office. We allow them to ingratiate themselves at the public trough; enrich themselves at taxpayer expense; continue to reelect them; and allow them to retire with benefits fitting a god. We the voters have been the enablers here, and must share much of the blame. Will America lose its freedom? Is there still time for that “Hail Mary Pass”? We’ll discuss that in my next article.