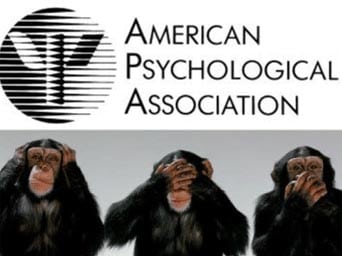 The Collective Abuse Trauma Committee of the American Psychological Association will soon issue a report concluding that the American public has handled the trauma of watching their own leaders murder 3,000 of their fellow citizens on live television, and then get away scot-free, “suprisingly well, considering the circumstances.”

“Typically, victims of abuse on this scale are completely devastated,” explained Dilbert Digglehole, a psychoanalyst who heads the Abuse Trauma Committee. “They may find it hard to hold down a job or make lasting friendships, lose the ability to work productively over time, develop serious drug or alcohol problems, and experience recurrent run-ins with the law. They are high-risk for suicide, and often must struggle heroically to avoid becoming abusers themselves.”

Digglehole contrasted the complete devastation often produced by Level 1-AAA abuse with the relative resilience the American public showed after watching Cheney, Bush, Rumsfeld and Silverstein blow more than 2500 people to smithereens in the controlled demolitions of WTC-1 and WTC-2 – and then lie through their teeth about it, in such an obvious fashion that a chimpanzee could see it, without ever being brought to justice.

“Sure, there has been some acting out,” Digglehole admitted. “Americans have murdered a couple of million people in Iraq and Afghanistan, experienced episodes of psychotic anti-Muslim frenzy, burned the Constitution and erected a police state. Other than that, though, they’ve really handled the situation in a surprisingly mature fashion.”

Dr. Sniddley Krapple, a trauma expert on the committee, explained that it could have been much worse. “What you have to remember is that that in terms of abusive trauma, this one was off-the-charts,” she explained. “The whole thing was designed to engineer the most profound shock to the human nervous system that television is capable of. Having one’s own leaders participate in something like this…well, it’s sort of like a child who’s always been reasonably well taken care of, as far as she can tell, suddenly watching her mother and father torture her two siblings to death. After an experience like that, you’d expect the American public to be completely incapacitated. And yet somehow they’ve brushed the nanothermite-dust off and gotten on with their lives.”

Digglehole added: “In a less mature country, people might have experienced uncontrollable outbursts of anger. They might have stormed the White House, the Pentagon, CIA headquarters, Silverstein’s offices, PNAC, and so on, and just burned everything to the ground and lynched the perpetrators.   But Americans have apparently taken lots of anger management classes and are now capable of avoiding being overcome by feelings of entirely-justified homicidal rage against mass-murdering traitors who deserve to die in the slowest and most painful way possible. Having passed through this crucible of trauma, Americans have emerged strong enough to forgive and forget, as they go about their daily business of murdering millions of completely innocent people on the other side of the world.”

The only committee member to dissent from the majority’s findings was Dr. Sneezley Chewingum of Harvard’s Grumpus Memorial Institute for the Study of Hereditary Insanity. “When people are in serious denial, they build an imaginary wall around the source of their trauma,” he said. “This may solve the problem temporarily. But living in an illusion has its costs. As the victim loses contact with reality and develops more and more false perceptions, and is forced to unconsciously expend more and more of his efforts to maintain the walls of denial, at some point the whole thing becomes unsustainable, and the person’s personality suffers complete collapse. I fear that’s the direction our nation is heading.”

After weeks of studiously trying to pretend that Dr. Chewingum didn’t exist, the other Committee members suddenly jumped on him, dragged him to the ground, and smothered him with a pillow.

The Committee’s now-unanimous report is scheduled to be issued next week.

See also:  Psychologists: Questioning 9/11 Is the Sane Thing To Do