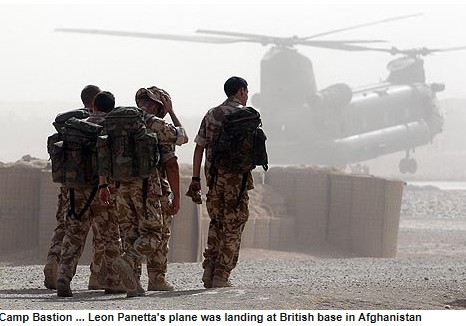 – US Marines Ordered to Place Weapons on the Ground –

Moments ago, a truck bomb exploded on a British airstrip in Helmand province in Afghanistan, believed to be an unsuccessful attempt to kill US Secretary of Defense Leon Panetta.  The driver survived with serious burns and is under arrest.

One British soldier is seriously injured.

From the UK Sun:

An individual inside the vehicle is receiving medical care for burns, sources  say.

The camp went into immediate lockdown and an investigation has been launched.

An Afghani is believed to have made the deliberate attempt on Mr Panetta after  he broke through defences and drove a vehicle towards his aircraft.

He then went past the perimeter surrounded by armed security and large  concrete block guards.

Disaster was only averted when the truck caught fire and crashed into a ditch  on the runway close to where Mr Panetta’s jet had landed or was set to land.

First reports suggest there was no explosives device inside the vehicle.

But it is thought the car was heading towards a welcoming committee for Mr  Panetta.

However it then burst into flames — possibly after being shot at — and the alleged perpetrator was arrested by security teams.

An ISAF spokesperson said: “We are aware of an incident today at Camp Bastion  where a vehicle caught on fire. The driver of the vehicle is being medically  treated.

“We are currently investigating to determine more facts of this incident.

“At no point was anyone on the aircraft at danger from this incident.”

The visit was unannounced and shrouded in secrecy until he safely touched  down.

Panetta continued his scheduled meetings meant to heal the extreme differences between the US and Afghanistan after the killing of 17 civilians by what the US Army says was “a lone gunman.”

Afghan authorities say that they have proof that as many as 20 Americans were involved in what they say is a revenge attack.

American security personnel traveling with Panetta were told other threats were likely including an attack from Afghan soldiers at the base.

American Marines accompanying Panetta were ordered disarmed in an unusual move to dispel an idea of mistrust or insult.

It is expected that this part of the story, the ordering of Marines to place their weapons on the ground for Panetta will provide fodder for political enemies of the president.

In further reports related to the killings south of Kandahar, more information in coming in.  We are told that, during the week before, 6 soldiers from the base involved in the “lone gunman” attack were killed by what was believed to have been an attack staged and planned from the villages whose women and children were slaughtered.

It is also said that up to 20 Americans were wounded.

However, casualty figures released by the Department of Defense indicates no record of the incidents described.

There is a consensus in Afghanistan that the attacks, when seen in light of the recent Koran burnings which came immediately after the Marine “urination” scandal more or less prove that continued American efforts in Afghanistan are counterproductive to the survival of any government seen cooperating with the United States and its limited coalition allies.