Home Government Reflections on the Situation of Ron Paul; Do We Dare Really Think? 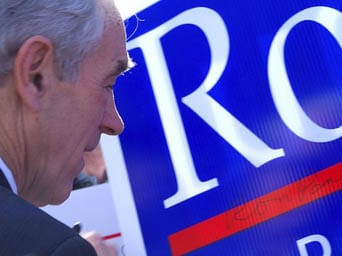 Advice to self: Get out of the prediction punditry game; stop trying to understand human psychology; learn to forgive and not forget. Quit over-thinking the room.

The yo-yo of today’s events, as manipulated as they are can drive a man to drink and distraction.I offer no advice nor analysis, only comment; you are invited to comment as well, after all, we are in this stew together, for better or worse.

Question: Is Ron Paul going to lead a third party that can bust the monopoly? Has his popularity, despite the wet blanket tossed by corporate media generated enough populist steam to get it done?

I wish. And hope; but doubts won’t blow away. Too many entrenched roadblocks are standing in the way. We want to be hopeful, optimistic, don’t we? Is it really that much easier to be satirically cynical and just point out what’s wrong with everything?

Yes, it sure does appear the time is ripe for this revolution. Are the appearances deceiving? Since I have had experience in taking part in oddball political campaigns for the presidency—Charles Collins, and the pole vaulter, Richard’s joined by health guruess Maureen Salaman (bet you don’t remember that one?)

Talk about obscure. Charles Collins was really opposed to the Fed, and made a great case for real monetary reform; he was Ron Paul without the gravitates or congressional record. Richard’s’ face had appeared on Wheaties boxes, but was as much a muppet as any, but he was our “Liberty Lobby” muppet. (what was his first name?)

(That’s like Lyndon LaRouche and his cult, they don’t want to change basic wrongs so much as they want to take the power. Think to the tune of ‘Impossible dream.’)

The key words are ‘ballot access.’ If you have followed the twists, turns and flexible Roberts Rules of order used by political parties to maintain the dialectic of control, you have an inkling of how tough ‘they’ (the immaculate they!) have made it for real change to take place.

To keep 300 million dangerous lemmings in line it takes brains, cunning, bottomless money pit, and several pathologies. No wonder it’s such an uphill fight for all of us ‘normals.’

Let’s just say that the best road opens up—the Libertarian Party, which has ballot access nearly everywhere, opens up and adopts Ron Paul for this election—they would be a cinch for the popular vote, and even the media wet blanket could not quench the revolution, right? Nope, wrong?

The egos in the Libertarian party can’t tolerate Ron’s lack of ego. They will not adopt him. Besides The sick bastards with the power of the phony money and the television (and the courts, don’t forget the Masonic angle) would lawsuit the huge popular uprising to death.

We, the people have the misfortune of coming into this world with all the tools from our Creator, but we arrived in the form of stubborn, individuals with ideas about everything and knowledge about nothing

You figure it out, it’s over my head. I remember once, while broadcasting to the choir as Radio Free America; I did as I’m known to do—I over-thought the room by suggesting that those of us wanting the ‘militias’ to toss the bastards out were simply asking to end a huge corrupt system and replace it with a bunch of egomaniacal’ warlords’ like Bo Gritz. Wow! You shudda seen my hate mail.