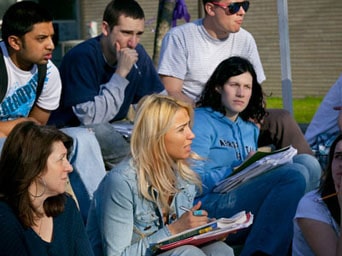 Each of us has our own idea of what education for our youth should be.

There is what is; there is what ought to, or should be; there is what can or cannot be. So when confronted with the above selections, I always revert to my father, whose wisdom I learned to respect (as it should be in a family). He oft repeated this mantra of false modesty: “I’m smart enough to know I ain’t smart.”

Education, shall we tinker with it?

Have too many clever, unscrupulous, people tinkered with it in history? You betcha! We Don’t Need Lying Schools When We Have Video-Internet

My dad, and me prove one thing—you don’t need to grind through curricula of institutions to learn how to think; Of course we were both lousy soldiers. Left-Right, Left-Right.

How did that happen? We came out of the same gene pool of smoked Scots and Anglo-Masonic know-it-alls that joined with the Cabbala chanting Jews several hundred years ago to help arrogant Anglo assholes lay claim to the world.

If there is anything to overrated gene pools, I should be richer and more powerful.

My father’s grandfather is credited with figuring out the human circulatory system (Sir William Harvey).

I shant forget the night when our family was lounging around the radio console, And the subject came up—family pride was all aflutter. My dad’s brothers—Ian and Harvey and their wives were on hand as well, so talk of great grandfather was appropriate.

My dad, with his two beer stutter, knocked the reverence out of the room: “Makes you f…f…f…fuckin, wanna j..j..j..jump up and salute, don’t it?”

Like I said, the old man knew the score, even as a young working fisherman.

Speaking of bleeping Masons, When I was broadcasting Radio Free America; the cult of hero worshippers who followed Bill Cooper, began a crusade to smear me as a Mason. I had challenged Cooper’s credibility when he appeared on the show; apparently making him and his loyal followers mad.

Shortly thereafter, at a Liberty Lobby rally on the Capitol steps where I served as a Master of Ceremonies, some of Cooper’s followers came up ostensibly to shake my hand and suddenly, they gleefully announced that I had given them the “handshake.” Of course it was a normal handshake anyone will proffer to any stranger, and I would not have known the Masonic handshake from a high five.

My Protege, the late Lars Hanson, did an expose of Cooper and his buddy Lear long ago, and if I ever get the details, I may run them up on VT only because the Cooper myths still float around among the “patriots.”

There is one more tale from my youth, to illustrate the homespun wisdom that shaped me into what I became.

After graduating high school, where I admit my two failing grades came in journalism and a course called “westward expansion” a history of our nation. I goofed off till joining the navy. During the interlude, I pounded abalone into steaks to earn a few bucks and played baseball.

One of my shiftless friends was Eugene Mazza, loose cannon with sexy sister. Gene was a promoter for our local chapter of “The Native Sons of The Golden West.” A kind of goofball fraternity for dolts who reveled in being born in California, as opposed to all those “immigrants” from Detroit, Chicago, Tulsa or Texas.

I went to the “lodge” to become a member. The initiation ceremony was infantile, and I failed to become an initiate. They wanted us to put on feathered headbands (Injuns!) and sort of dance and chant before swearing some kind of ridiculous oath. I laughed myself into the street went home, and told the old man about it, and how it probably cost me some friends since grammar school.

Jimmy Valentine just peered into the sunset behind Morro Rock, then told me: “I will never understand grown men doing that stupid stuff.”

That was it. No more needed to be said. He was right then, and his words are right today.

This is a “therapy” column, where I type things that pop into my head that I think some will enjoy reading. It is also a kind of sequel to my last effort highlighted above.

I really do want to get a snowball started for using VT as the educational tool it is.

One of the big things missing in today’s society is the education boys get from fathers who they respect and admire.

Check out several videos that can be used as “ongoing education” for the many people who can read, write, and ‘rithmetic, enough to keep up with our computer communicating world.

Obviously all of you who keep up at VT have been well educated enough to think you know things. And we all know people who need some learning and attitude adjustment.