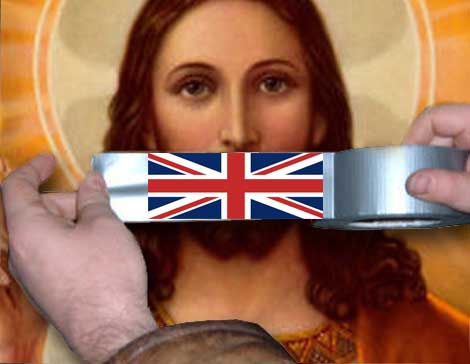 (London, UK) -The country that gave the world free speech has decided to take it back.

That, at least, is the implication of two unsettling developments:

In the first case, the UK government has made it a criminal act to express any negative emotions about the slaughter of innocent women and children by an army of war criminals. (Reality check: According to international law, every NATO soldier in Afghanistan is guilty of aggression, the supreme war crime, and therefore ought to be tried, convicted, and hanged by the neck until dead simply for being there. As for which ones go to hell, God can sort that one out.)

In the second case, the UK government has apparently decided that it is a crime for any media outlet of any size to tell the truth on a regular basis. (Press TV offers a broad array of perspectives, including many that – unlike the systematic lies of the mainstream media – are within hailing distance of reality.)

By banning free speech and a free press, the UK government has virtually delegitimized itself and admitted that it is not a government but a criminal organization. It may soon be incumbent on the citizens of the UK to overthrow the crime lords masquerading as government officials, and restore lawful governance in the island that gave the world the Magna Carta.

UK government officials who shut down free speech and free media should DIE & go to HELL!

If I stood on the soapbox in Hyde Park and said that, would I be arrested?

And if it’s true, as Alexander Baron suggests, that “there has never been a real tradition of free speech in Britain”…well, maybe it’s time for the Brits to start the kind of revolution we had over here in the colonies.  (We yanks need another one here too…but that’s another story.)

So now if I’m arrested next time I’m in London, you’ll know why.