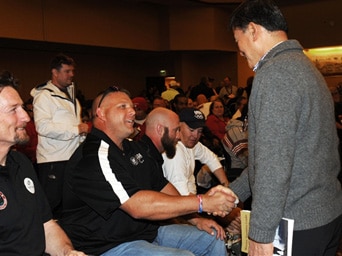 SNOWMASS VILLAGE, Colo., March 27, 2012 – As disabled veterans gathered at the base of Snowmass Mountain to tackle their first ski runs on adaptive skis during the National Disabled Veterans Winter Sports Clinic, they had an unexpected cheering squad: U.S. Paralympians, including two training for the 2012 Summer Games in London.

Positioned slopeside yesterday to encourage their fellow veterans sat Scott Winkler, an Army veteran who was paralyzed from the chest down after falling from an ammunition truck in Tikrit, Iraq, in 2003, and Kari Miller, a former Army reservist who lost both legs and had her left arm crushed when a drunk driver hit her car in 1999.Both now Paralympians, they provide what Veterans Affairs Secretary Eric K. Shinseki called “great examples of what determination, dedication and hard work can result in” as he addressed disabled veterans during opening ceremonies for the winter sports clinic.

About 400 veterans, including nine active-duty service members and 94 veterans of operations in Iraq and Afghanistan, are participating in the clinic that started yesterday and runs to March 30.

Rattling off a long list of disabled veterans who have risen to the highest levels of competition, Shinseki called them an inspiration to other veterans struggling to come to grips with their disabilities. “They are special examples for all of us,” he said, as they continue to represent their country in world competition.

Winkler, an Army specialist when he was wounded, admitted that he had to be “dragged” to his first sports clinic for wounded warriors in Colorado Springs, Colo., in 2006. It was there that he threw his first shot put, and he combined talent and determination to break the Paralympic shot put record within a year. In 2008, he became one of the first Iraq War veterans to make it to the Paralympic Games in Beijing, where he placed fifth in his category.

In November, he won a gold medal at the 2011 Parapan Games in Guadalajara, Mexico, and he’ll head to London in late August to compete for a spot on the 2012 team.

Looking at his success, Winkler doesn’t see himself as any different from other disabled veterans. “I believe everybody has hidden talents somewhere in their body,” he said. “It’s a matter of when it comes out. And if you don’t get out there and try, you will never know. So you have to keep driving yourself to knock down those barriers.”

Winkler, who lives in Augusta, Ga., continues to work with wounded warriors at nearby Fort Gordon to encourage them to reach beyond their comfort zones. “I enjoy inspiring people, helping them realize that there is life after injury and what they can do if they don’t give up,” he said. “It’s not the disability. It’s the ability.”

Miller recalled the tough days first days as a double amputee, and the physical and emotional healing she found returning to her beloved basketball court. “I started playing wheelchair basketball before I even had my stitches out,” she said.

She went on to earn a spot on the University of Illinois wheelchair basketball team, before getting introduced to a new love: sitting volleyball.

She was a natural, getting named to the U.S. Paralympics women’s sitting volleyball national team in 2005 and finishing fifth in the world championships in Roermond, Netherlands. From there, her trajectory went skyward. She earned a gold medal during the 2009 Euro Cup in Roermond and silver medals during the 2008 Paralympic Games in Beijing and the 2010 World Championships in Edmond, Okla.

Also in 2010, she was named USA Volleyball sitting player of the year and best libero, or defensive specialist. Now training for the London games, Miller took time out from her schedule to attend her first winter sports clinic and encourage her fellow veterans.

Miller credits her sport competition and work with the U.S. Olympic Committee Paralympic Military Program with helping her realize her potential as an athlete with a disability. “Paralympic sports opened my mind to a different world,” she said. “I learned that I had options.”

Now, she said, she hopes to share those lessons with other disabled veterans so they can see that they, too, can find release and healing through sports therapy and competition. But just as importantly, she added, she wants to be a sounding board for her fellow veterans as they work through the healing process.

“Some of them are in the middle of the struggle, and I want to be here to listen to their stories and if I can, help them through their transition,” she said. “When I think about the legacy I want to leave, a medal is not good enough. If hearing my story, or my listening to yours, helps you move forward, then that’s what I want to leave behind.”

Other veteran Paralympians who compete in winter sports popped into the clinic to greet the participants before heading to the 2012 U.S. Adaptive Alpine National Championships at nearby Buttermilk Mountain in Aspen, Colo.

Among them was Chris Devlin-Young, a Coast Guard veteran who got his first exposure to skiing at the 1987 National Disabled Veterans Winter Sports Clinic, three years after a C-130 Hercules crash in Alaska left him a paraplegic.

Devlin-Young admits he was mad at the world at the time about losing of use of his legs and said he had little interest in trying out skiing. But the first time down the hill, he was hooked. “It gave me adrenaline and control,” he said. “It gave me my life back.”

A four-time Paralympic Winter Games medalist, he claimed the gold at the 2010 International Paralympic Committee Alpine Skiing World Championships and became the the World Super G sitting Paralympic champion in 2011.

But through his long winning streak, he’s never forgotten how the Disabled Veterans Winter Sports Clinic changed his life. Devlin-Young continues to return to the clinic to serve as a guest instructor and mentor for other disabled veterans.

Winkler said he recognizes that Paralympic-level competition isn’t for everyone. But he called recreational therapy a key to mental, physical and emotional well-being he said can make all disabled veterans healthier and feeling better about themselves.

“You don’t have to stop life,” he said. “You can take it as high as you want, and have fun doing it.”

The idea, explained Christopher Nowak, who runs the program, is to engage veterans early in their rehabilitation and give them a renewed sense of purpose and hope for the future.

“Adaptive sports have a long history in VA, and our objective is to challenge veterans to redefine their capabilities, set goals, train and compete in their communities,” he said.

The winter sports clinic, jointly sponsored by VA and Disabled American Veterans, is just one of the programs that exposes disabled veterans to these new opportunities. The program is open to veterans with disabilities ranging from spinal cord injuries and orthopedic amputations to visual impairment and neurological conditions.

As they learn adaptive Alpine and Nordic skiing and get introduced to rock climbing, scuba diving, trapshooting, wheelchair fencing, sled hockey, snowmobiling, and sled hockey during a six-day program, many discover a whole new world of opportunity.

“You may have been injured, but life isn’t over,” Shinseki told them. “There is still a lot of living to do for all of us.”

A new link on the VA website outlines opportunities available through the Mission ReDefined program.