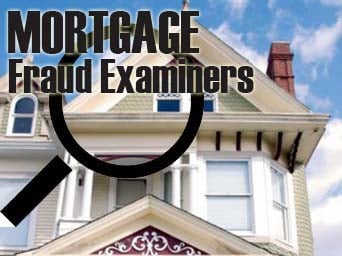 Mortgage Fraud Examiners, the investigative firm who warned the public about the “criminal loan modification trap, useless “forensic loan audits,” the “administrative process” scam, and “pretender defenders” is now warning homeowners and the public of the latest worthless service—Securitization Audits.

(PRWEB) March 27, 2012 – With many homeowners facing foreclosure and looking for help across America, many worthless services have cropped up with such promises as “mortgage elimination” or other foreclosure tactics that in some cases are patently illegal. One commonly advertised service is a Securitization Audit.

A number of companies have been pushing “forensic loan audits,” aka TILA/RESPA audits. Since knowledgeable attorneys and homeowners recognize these “audits” are basically useless, the “wolves in sheep’s clothing” are now peddling, securitization audits.

Mortgage Fraud Examiners Founder Storm Bradford explains: “The supposed reason given for a ‘securitization audit’ is to determine the true owner of a promissory note. Allegedly, with this information, the homeowner can show a court that the party actually foreclosing on a mortgage is not the actual note owner.

However, securitization arguments like, “show me the note,” “assignment,” “MERS,” “robo-signing,” and so on, generally amount to nothing more than just stalling the inevitable–the homeowner getting booted to the curb. None of these hopeless arguments changes the essential fact; the Court in a judicial state MUST give relief and remedy to the lender or assignee, because the borrower breached the contract. And in a non-judicial states, the private trustee implements a private sale to a buyer without a judge’s involvement. Nobody ever looks at the issues raised by the securitization audit. So only the uninformed would think a securitization audit could be anything more than useless.

Moreover, if homeowners and their legal counsel really had doubts about who had the legal right to foreclose they’d file what’s known as a interpleader action listing everyone who might have a claim, deposit their mortgage payment with the Court, and let the lenders and assignees fight it out. However you never see that, since defaulting homeowners and their counsel really don’t care who has the right to foreclose, so long as it’s not THE bank foreclosing now. It’s just about stalling, and lining the pockets of ‘pretender defenders.’ Mortgage Fraud Examiners Warns

As a result, knowing who owns your note is like knowing the earth speeds through the universe at 67,000 miles an hour, it’s basically worthless information. Nonetheless, as a courtesy to homeowners they can call us and we’d be more than happy to show them how to acquire information about the owner of their note for FREE.”

Gregory Bryl, a foreclosure defense attorney practicing in Virginia and Florida, explains: “most ‘securitization audits’ that I have reviewed are inadmissible in a court of law; they contain a mere opinion of a layman without personal knowledge (direct experience) as to what happened with a particular mortgage note after closing. Why pay a securitization auditor when you can have your grandmother provide an opinion as to what happened with the note and have her sign an ‘audit report’? In reality, in about 95% of all cases, the information supplied by a ‘securitization audit’ is either already publically available, or it is unavailable to either the homeowner or the auditor. Thus, where a homeowner genuinely lacks this information, an outsider’s opinion (in contrast to the bank’s admission) is unlikely to help.”

Thomas K. Plofchan, Jr., an attorney in Sterling, Virginia, who employs the services of Mortgage Fraud Examiners, adds: “Ultimately, the only real issue is whether a proper lien has been created with the house as collateral. It is astonishing just how many legal errors, contract breaches, and frauds, can be exposed by a meticulous examination of the mortgage transaction.”

“Matter of fact, in two recent cases we were able to identify and establish evidence to show the deeds of trust were void. The end result for the homeowners was receiving their respective homes free and clear. So, it’s quite clear, a thorough examination of the mortgage contract is the ONLY proven method to uncover evidence that could affect the validity of the lien.”

Attorneys Bryl and Plofchan, like many attorneys are exposing securitization audits for what they are basically worthless. New Homeowner Scam: Mortgage Securitization Audits and Federal Trade Commission: Loan Securitization Audits Are Scams
Bradford concludes: “Undeniably, the only established procedure for a homeowner to obtain financial compensation or their home free & clear is through an in-depth analysis of the mortgage transaction, to identify legal errors, contract breaches, tortious conduct, to include appraisal fraud; and then attacking the loan based on those findings. Regrettably, everything else is just wishful thinking or a scam. Quicken Loans on losing end of $3 million predatory lending verdict –

Mortgage Fraud Examiners is a project of Lex Consulting, LLC, for over 30 years, Lex Consulting has provided litigation support to attorneys, helping them break into new areas of practice, or providing specialized advice for complex cases requiring novel approaches to the law. Due to the housing crisis, Mortgage Fraud Examiners, a team of specially trained legal professionals, was created to provide borrowers and the legal community with comprehensive assistance to help them keep them in their homes.

This year, the perfumery chain “will be positive in cash and operating profit globally,” said Pierre Letzelter, president of LVMH Moet Hennessy Louis Vuitton-owned Sephora and interim chief executive officer of Sephora Europe in the run-up to the nomination of a full-time replacement in coming months.

Letzelter’s declaration follows a significant housecleaning, including the renovation of Sephora’s brand image in Europe and the shuttering of money-losing doors.

Such changes seem to be paying off. As reported, for the nine months ended last September 30, for instance, LVMH said sales at Sephora in the U.S. continued to grow by more than 20 percent on a constant-store basis.

In 2001, when the market was rife with rumors that LVMH would divest Sephora, industry sources estimated that Sephora Europe generated a volume of $787.7 million; Sephora in the U.S. rang up $301.2 million, and Sephora.com, $23.2 million.

All dollar figures are converted from the euro at current exchange rates.

Sephora, with about 400 European doors and 75 in the U.S., has instigated a new policy for store openings.

“It is extremely important that all of the stores we open in Europe, as well as in the U.S., are auto-financed,” continued Letzelter. web site sephora coupon code

“The rule is no cash is to come from LVMH,” said Francois Neukirch, general director of Sephora France. “If we have no money, we won’t open any stores.” Letzelter said, however, that the thrust these days is less on openings, which will take place in key markets, such as Poland, the Czech Republic and Romania.

“There will be very few,” he said. “In France, [for example], two-thirds of the budget is for renovating stores and one-third for openings.” Money and time have been of the essence. Letzelter said a key focus at Sephora Europe during 2002 was the reduction of staff turnover. “It’s now at 20 to 25 percent, whereas two years ago it was at 50 percent,” he said, adding: “We can do better.” Another aim has been on reducing and reorganizing the chain’s stock. For instance, rather than being lined up on a first-come, first-serve basis, items in Sephora’s storerooms are now arranged alphabetically, as they are in-store. Such a strategy frees up employees’ time to spend with customers, said Letzelter.

Such changes have also helped boost the sell-through of all brands in Sephora’s European doors, he claimed.

Sephora has concentrated on building a closer rapport between its European and U.S. divisions. Until recently, they acted as wholly separate entities. Now, they speak on a regular basis. “Such cross-fertilization is important,” said Letzelter. go to web site sephora coupon code

So, too, is tweaking product mix carried in Sephora stores on a case-by-case basis. “We must adapt the mix to the market,” he continued.

Another integral part of the Sephora offering is its private label brand. Its lineup is constantly being expanded and now generates 7 percent of the store’s overall sales. Ultimately, it could grow to ring up 8 to 10 percent.

And, when it comes to cyberspace, Letzelter said Sephora.com is Sephora’s strongest store in the U.S., with an average basket that’s 40 percent bigger than any brick-and-mortar Sephora door there.

However, the retailer does continue to open U.S. doors. It announced this week that a new flagship is planned in San Francisco at 33 Powell Street, near the corner of Market Street, this summer. The flagship is slated to be a 8,500-square-foot, single level store and in terms of square footage will be the company’s fifth-largest door. Consistent with the retailer’s strategy of focusing on single-level stores, Sephora said it will close its three-level location at the corner of Stockton and Market Streets, which opened in November 1998.