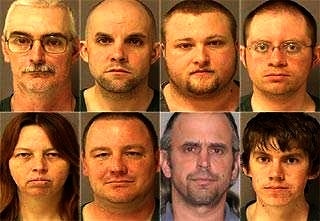 In a ruling sure to cause embarrassment to the FBI and Homeland security, today Federal Judge Victoria Roberts dismissed all conspiracy charges against seven members of the Michigan Hutaree Militia group ruling that the government failed to prove their case.

The Tuesday decision is an embarrassment for the government, which secretly planted an informant and an FBI agent inside the Hutaree militia and claimed members were armed for war in rural southern Michigan.

The militia members were charged with conspiring to commit rebellion, or sedition, against the government and other crimes. There was no actual attack before they were rounded up in March 2010.

Assistant U.S. Attorney Sheldon Light conceded there’s no proof of a “specific plan” to attack the government. But he said there’s much evidence in secretly recorded conversations to show the Hutaree militia wanted to draw in federal law enforcement by killing local authorities.

“So much of this case is about people being present. … Many things the defendants said are quite offensive. But so what?” Judge Roberts said.

“I would not agree that there had to be a plan for a widespread uprising to constitute the conspiracy charge,” Light said.

Roberts said prosecutors seem to believe that someone can be charged with conspiracy unless they actively disagree with the plot.

Independent attorneys who observed the case had predicted that Judge Roberts would dismiss the case based on questions she asked the prosecutors and comments she made in court. It was apparent that she felt that the charges were a stretch.

The government wasted over ten million dollars pursuing these charges and it is encouraging to see a judge with the integrity to stand up for human rights over government control.

The defendants have been held without bail since their arrest in March of 2010.

Update– I spoke with the father of one defendant and he said that his son had been released and was now at home enjoying his first taste of freedom in two years. Five of the defendants have been released all charges against them being dropped.

The trial, which began Feb. 13, will resume Thursday with only a few gun charges remaining against militia leader David Stone and son Joshua Stone, both from Lenawee County, Mich. They have been in custody without bond for two years.
Case Quotes:

“The judge had a lot of guts,” defense attorney William Swor said. “It would have been very easy to say, `The heck with it,’ and hand it off to the jury. But the fact is she looked at the evidence, and she looked at it very carefully.”
Another attorney, Richard Helfrick, said: “It’s a good day for the First and Second amendments.”

“The court is aware that protected speech and mere words can be sufficient to show a conspiracy. In this case, however, they do not rise to that level,” the judge said.

David Stone’s “statements and exercises do not evince a concrete agreement to forcibly resist the authority of the United States government,” Roberts said Tuesday. “His diatribes evince nothing more than his own hatred for _ perhaps even desire to fight or kill _ law enforcement; this is not the same as seditious conspiracy.”

The FBI had put a local informant, Dan Murray, inside the militia in 2008 and paid him $31,000. An FBI agent from New Jersey was also embedded. Steve Haug, known as “Jersey Steve,” posed as a trucker and spent months secretly recording talks with Dave Stone. He even served as David Stone’s best man at his wedding, a celebration with militia members wearing military fatigues.
Haug repeatedly talked to David Stone about building pipe bombs and getting other sophisticated explosives. The FBI rented a warehouse in Ann Arbor where the agent would invite him and others to store and discuss weapons.