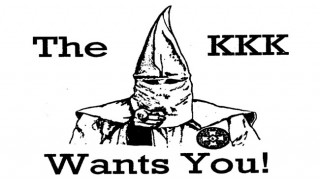 Once upon a time in America back in the nineteenth century, there was a far-right organization known as Ku Klux Klan that adhered to primitively radical and hidebound ideas including white supremacy and brutalized and persecuted the colored race through an act of terrorism.

Also known as the Klan, the group emerged in Pulaski, Tennessee, and is today stigmatized as a hate group. The organisation, which has now been stripped of its name, still exists and splinters into different manifest forms: Racial hatred, religious hatred and ideological hatred. The organization is not extinct as many sinister forces in the US government tried to consign at least the name to oblivion and is estimated to have more than 10,000 dedicated hatetivists in the United States alone who spare no efforts in giving vent to their racial and religious hatred by intimidating and liquidating those they deem as the wretched of the earth.

The group is innocently called a hate group and the crime they commit is categorized as a hate crime rather than an act of terrorism. According to a lame definition for the unfortunate term provided by the FBI, “A hate crime is a traditional offense like murder, arson or vandalism with an added element of bias.”

In fact, what is happening in the United States and Europe under the banner of hate crime is but a new cloak the followers of the Ku Klux Klan are wearing. What they do is more than a crime against an individual; rather, it is a systematically organized crime targeting certain human races who do not easily fall into their definition of humankind. They put themselves in place of God and decide who lives and who doesn’t. This insanity has claimed the lives of others including Trayvon Martin, Kendrec McDade and Shaima Alawadi to mention only a few.

On February 26, George Zimmerman shot dead Trayvon Martin, 17 years old, outside his father’s house, claiming he killed the teen in self-defense after being severely beaten by Martin. However, the police video footage of Zimmerman’s arrest showed that there was no sign of injuries on him.

The tragic incident prompted US President Obama to publicly express his grief over the death of the teenage youth. He said, “[i]f I had a son, he’d look like Trayvon.” Without consciously desiring it, the President revealed the nature of the crime, namely it was an organized crime and that it was no ordinary crime. After all, Obama was severely criticized for his stance on the death of Martin. Stephanie Cutter, Obama’s Deputy Campaign Manager said on MSNBC that, “Obama’s Republican opponents have jumped all over him because they do want to play politics with this issue. The President spoke from his heart on this, it was trying to empathize with some parents who had just lost a child. By any measure, this was a tragedy and we need to let the investigation take its course.”

Crimes of this nature are basically put a lid on and soon forgotten. Besides, they are treated with some considerable degree of discretion lest they may be attributed to a regressive practice back in the nineteenth century. There are invisible hands at work in the American society to inculcate that something called Ku Klux Klan is dead and gone forever. And probably, President Obama’s sympathy stemmed from his archetypal wrath at what the notorious did to the black race.

Another heartrending instance of such barbarity is the death of Kendrec McDade, a 19-year-old football star, who was shot dead by Pasadena cops on March 25, 2012. According to the original story run by the US media, Pasadena police “shot and killed a robbery suspect who officers believed was reaching for a gun during a foot chase.”

The young boy’s hands were too close to his waistband. So the police thought he was reaching for his gun and blew his brain out.

Black people are not the only victims of the Ku Klux Klan. Shaima Alawadi, a Muslim Iraqi woman, was found dead on March 24 with a note near her body which said, “Go back home terrorist”. Shaima was badly beaten, hit with some kind of a tool about 8 times in the head. She died of her wounds in a pool of blood.

The perpetrators of these organised crimes work under the aegis of those who keep manufacturing a phobia of race and religion in order to maintain their supremacy over a certain religion or race. Their mindset is built upon an ideology rooted in blind ignorance and prejudice; they are indeed benighted souls trapped in their cocoon of ignorance.

– The availability of One Click, a simple and customizable user interface available on three multimedia devices – LG Lotus, Samsung Rant and Samsung Highnote.

– The upcoming arrival of several new iDEN devices, including the Motorola i576, extending Sprint’s reach in push-to-talk technology.

Customers purchasing these or any devices at Sprint retail locations can experience Ready Now, a new customer experience, the company said. Ready Now is designed to provide customers one-on-one tutorials on their new devices and on applications before they leave the store. Sprint retail associates will work with customers to explain, set up and demonstrate the features and applications of their device. With Ready Now, customers can virtually eliminate their learning curve before they leave the Sprint store. see here htc touch pro

“The announcement of our One Click user interface, two blockbuster Windows Mobile devices and several new iDEN devices redefines our commitment to make life easier for our customers and offer something for everyone in a variety of colors, styles, form factors and platforms,” said Kevin Packingham, Sprint senior vice president of Product and Technology Development. “These devices represent the best of wireless technology available today, offer ease of usability in accessing Sprint-exclusive features, and provide simple-to-navigate Internet access – all on Sprint’s Now Network. This lineup represents a very strong holiday offering for Sprint customers.”