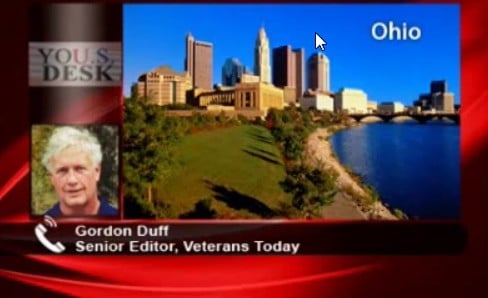 Editor’s note:  In an interview with a prominent leader of the Special Forces community, I was told training on dogs was abandoned years ago and that this type of operation is considered “shameful” and “unprofessional.”

When the video was shown, the officer consulted, a Special Forces Colonel with long combat experience indictated he had serious doubts that those shown were “tier one” material.

Gordon Duff,  senior editor of Veterans Today, says the group who shot and stabbed goats as  part of a military training is one of hundreds of “military contracting groups  set up by the people in the Republican Party”.

“There is a lot  of money, a lot of big Republican politics behind this, a lot of power,” Duff  told Press TV’s U.S. Desk on Thursday when asked about a video leaked which  shows a group of people mutilating and killing goats in horrific military  training exercises that are supposed to simulate injuries on the  battlefield.

He also said, “These guys have an awful lot of weapons stored,” asking “why they have so many  thousands of them locked up; what they’re involved in.”

Each year, more than 10,000 live animals are shot, stabbed, mutilated, and killed in horrific military training exercises that are supposed to simulate injuries on the battlefield. But the training exercises that are taking place in these highly secret courses bear no resemblance to real battlefield conditions—and they don’t help soldiers save the lives of their injured comrades.

In disturbing, never-before-seen undercover video footage leaked to PETA showing a Coast Guard training course in Virginia Beach, Virginia, instructors with a company called Tier 1 Group, which was hired by the military, are seen breaking and cutting off the limbs of live goats with tree trimmers, stabbing the animals, and pulling out their internal organs. Goats moan and kick during the mutilations—signs that they had not received adequate anesthesia.

During this cruel exercise, one Tier 1 Group instructor is heard cheerfully whistling on the video as he cuts off goats’ legs and a Coast Guard participant callously jokes about writing songs about mutilating the animals.

Later in the day, according to the distraught whistleblower who came to PETA, goats were shot in the face with pistols and hacked apart with an ax while still alive.

Cruel exercises like these continue regularly across the U.S. even though most civilian facilities and many military facilities have already replaced animal laboratories with superior lifelike simulators that breathe, bleed, and even “die.”

The Army’s own Rascon School of Combat Medicine at Fort Campbell does not use animals in its training program and has even publicly stated that “[t]raining on [simulators] is more realistic to providing care for a person than training on animals.” The Air Force’s Center for Sustainment of Trauma and Readiness Skills and the Navy Trauma Training Center also do not use animals to train soldiers.
Department of Defense regulations actually require that alternatives to animals be used when available, but this policy is not being enforced.

Unlike mutilating and killing animals, training on simulators allows medics and soldiers to practice on accurate anatomical models and repeat vital procedures until all trainees are confident and proficient. Studies show that medical care providers who learn trauma treatment using simulators are better prepared to treat injured patients than those who are trained using animals. A leading surgeon with the U.S. Army even candidly admitted in an internal e-mail obtained by PETA that “there still is no evidence that [training on animals] saves lives.”

For all these reasons, the Battlefield Excellence through Superior Training (BEST) Practices Act (H.R. 1417), which would phase out the U.S. military’s use of live animals in trauma training courses in favor of modern non-animal methods, has been introduced in Congress.

Please help improve military training and spare the thousands of animals who are tormented each year in these cruel exercises by using the form below to send polite e-mails to U.S. Department of Defense and Department of Homeland Security officials urging them to take immediate action to comply with federal regulations and completely replace the use of animals in military trauma training with superior non-animal training methods.