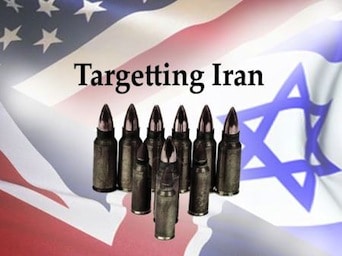 The United States must resolve that ‘never again’ is not just an ‘empty slogan’, said U.S. President Barack Obama on Thursday, in a statement marking Holocaust Remembrance Day. Yet, I am left bewildered, what does president Obama refers to? Is ‘never again’ a universal message pointing at genocides in general or did he refer to Jewish suffering only? With 1,455,590 dead Iraqis due to an Anglo American criminal war, it seems as if the USA is actually complicit in an actual genocide.

Obama’s comments followed Israeli PM Benjamin Netanyahu’s Holocaust Memorial Day address at Yad Vashem where he stated that Israel’s “enemies tried to bury the Jewish future but our future was born again in the land of our forefathers, here we built a base, and a new beginning of freedom, and hope and action.”

Netanyahu, as usual, was almost correct. The ‘Jewish future’ was indeed born again after the holocaust just to introduce total misery, racism, expansionism, oppression, death and carnage to the entire Middle East. The so-called ‘Jewish State’ has managed, in just a few decades, to locate itself as the primary threat to world peace. With the Jewish State and its lobbies pushing for a war against Iran, there is little room for doubt- Israel is driven by a suicidal inclination in the spirit of Biblical Samson. Yet, being a nuclear super power, Israel’s potential self-inflicted tragedy may as well put an end to the world, as we know it.

In Yad Vashem, the Israeli PM, once again explored the most banal pre-traumatic stress symptoms. He went on to say that today’s generation “faces calls to exterminate the Jewish State,” and that lessons of the past must not be forgotten. Netanyahu obviously focused on Iran, calling it an existential threat to Israel, and to world peace. He added, “It is the world’s responsibility to stop Iran securing nuclear weapons.”

PM Netanyahu is obviously wrong. It is actually obvious that nuclear Iran could only save Israel from itself. It would restrain the Jewish State and stop it from exploring its lethal inclinations.

If Obama is sincere, if ‘never again’ isn’t just an ‘empty slogan’ as he says, he better goes out of his way to restrain Israel’s genocidal inclinations and its belligerent pro-war Lobbies around the world.