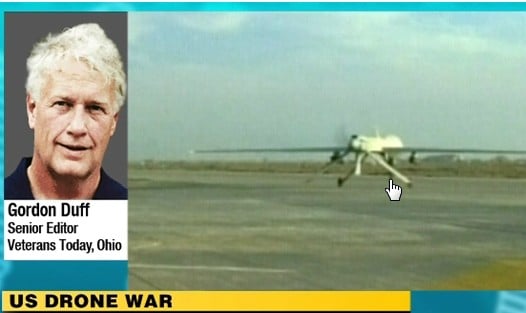 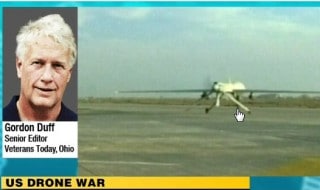 “We’re pretending that al-Qaeda is there (Yemen). In reality, we’re interfering in internal politics and we are assassinating political enemies of our friends in Yemen to maintain power.

But that’s part of a larger policy where we are migrating an imaginary terror organization over to Africa where we’re soon going to be starting drone attacks. We’ve been hoping for permission to do these in northern Nigeria against Boko Haram, Niger, Mali, Chad, and the C.A.R (Central African Republic).” (Gordon Duff, Senior Editor, Veterans Today)

The US military uses assassination drones in several countries, claiming that the airstrikes target militants; however, the attacks have mostly led to civilian casualties.

Press TV has conducted an interview with Gordon Duff, with Veterans Today, to further discuss the issue.
The following is a rough transcription of the interview.

Press TV: In addition to these killings going on by these assassination drones, under the nose of the UN, and also along with that there’s zero accountability for the US government, In some respects, a mockery is being made out of international law. Tell us your comments on that and, also, what is going on when in January Obama finally admits to the use of these drones and then now these ‘signature strikes’ four months later? Are they preparing the grounds for something that maybe we’re unaware of, that they’re laying the groundwork for it?
Duff: Two things. Both speakers you have here are exactly correct. We hope the new president of Pakistan will be Imran Khan who will put an end to drone strikes entirely – a good friend.
I had negotiated with General [Ashfaq Parvez] Kayani, the head of the army, and Al-Jazeera… a ten-day photo trip through Waziristan for the same purpose. After it was announced, I found myself in protective custody outside of Islamabad for some period of time – protective custody – under circumstances, let’s say, other than I approved of. There is every desire to make sure that none of this is seen.

The issue that Jim Fetzer had made, there is no such thing as al-Qaeda. There has never been. Osama bin Laden died in 2001. His CIA handler, Lee Wanta, works for Veterans Today. He’s been entirely debriefed.
I have seen in its entirety Osama bin Laden’s CIA file. I have read the entire thing. I have it in my computer – send the cover sheet at anytime, nothing beyond it. I’m a defense contractor. That’s my job.
As far as the game in Yemen, this is what it is. We’re doing these drone strikes here. We’re pretending that al-Qaeda is there. In reality, we’re interfering in internal politics and we are assassinating political enemies of our friends in Yemen to maintain power.
But that’s part of a larger policy where we are migrating an imaginary terror organization over to Africa where we’re soon going to be starting drone attacks. We’ve been hoping for permission to do these in northern Nigeria against Boko Haram, Niger, Mali, Chad, and the C.A.R (Central African Republic).
That’s where we’re moving imaginary al-Qaeda because we want to fight that war in Africa because we’ve been fighting it in Pakistan and Afghanistan, and we’ve been having our tail kicked.
It’s better to fight an imaginary war than a real one, and we do so, love fighting these wars with a joy stick and a drone.

Press TV: You had something to say but before you say that, I’d like to find out from you. You say that Imran Khan, maybe, is going to be the next president of Pakistan – Pakistan doesn’t like these drones, on the surface, in the news they say that.
But there’s that Baghram Air Base, for example, 1.2 billion dollar tender, is said to be these robotic intelligence warfare equipment to include the use of drones. Drones are pretty much here to stay in different parts of the world.
Duff: I’ve talked at length with Imran Khan about drones. We’ve certainly sat down together, gone over the effect they’ve had in destabilizing Pakistan, which our other speakers have brought out very, very accurately.
The fact that drones themselves have caused militants – we’re talking about killing militants. Why are people militants? Because drones have killed their families. Everyone in Waziristan wears a beard. Everyone has a gun, and once you kill their family with a drone they’re going to be militant. From that day forward in their lives they’re going to kill Americans.
What’s behind this, what’s always behind this is economics. The issue here, of course, is that we have all of the world’s major currencies in freefall collapse. We’re having a difficult time collateralizing currencies with hydrocarbons – which Iran is one of the countries that depend on hydrocarbons.
This is why we’re moving towards Africa, because we’re able to collateralize with diamonds. We need to be able to collateralize with currencies, with rare earths which exists in, let’s say, considerably more value, and in limited amount of gold.
But the issues behind all of these games are economics. Of course, why do we have Occupy? Because we have a very small number of people in the world who control all of the assets of the world, and the rest of us are being pushed into police states. We live in slavery. We live with, exactly as your other speaker said, drones over our heads threatening us with non-lethal or less-than-lethal weapons.
The breakdown of society, we’re looking at the edge of it because society is going to break down when we are no longer able to run the world on counterfeit currencies. When we come to an end, when we’re no longer able to go down and buy gasoline and food, it’s all going to come apart. They need this police state mechanism and these technologies so they can control all of us.
We the people, all of us, all of the people of the world, are a potential enemy and these technologies exist for nothing other than controlling the people of the world as the enemy of – we can’t even name who we’re being enslaved by. We don’t even know.