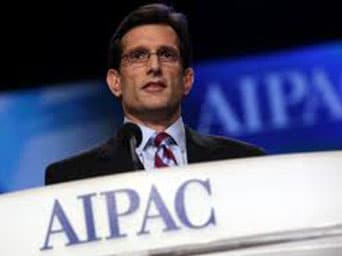 In yet another sickening display of gutless obedience to the Israel lobby and the Jewish dominated media, the “U.S.” House of Representatives has passed legislation which promotes Israel’s interests over the interests of America and Americans by passing the United States-Israel Enhanced Security Cooperation Act of 2012.

This treasonous bill was sponsored by Zionist and Israel-firster Eric Cantor and Goy Boy Steny Hoyer. Only two Congressmen voted against it, Ron Paul and John Dingell!

Ron Paul, who draws thousands of people to his presidential campaign rallies  but who is virtually blocked-out by the kosher (I use kosher very objectively and honestly which requires strong negative connotations because it is based on nonsense, it causes inhumane treatment of animals and it puts BILLIONS of dollars in the pockets of rabbis and is just another religious scam)  media, openly defied the powerful Israel lobby regarding this unconstitutional bill. Paul said, “This bill states that it is the policy of the United States to ‘reaffirm the enduring commitment of the United States to the security of the State of Israel as a Jewish state.’ However, according to our Constitution the policy of the United States government should be to protect the security of the United States, not to guarantee the religious, ethnic, or cultural composition of a foreign country. In fact, our own Constitution prohibits the establishment of any particular religion in the US.” This violation of the Constitution’s principle of separation of church and state should be pursued in efforts to stop foreign aid handouts to Israel.

A similar version of the bill is in the “U.S.” Senate and will be voted on soon. Israel owns not only the “U.S.” House of Representatives, but also the “U.S.” Senate and the White House. The passage of the similar bill in the Senate should have no trouble being passed. Especially with rabid pro-Israel senators the likes of Chuck Schumer. Schumer is under the delusion that God put him in the “U.S.” Senate so he could protect the Jewish state of Israel. Schumer openly said on a Jewish radio program, “”You know, my name …. comes from the word shomer, guardian, watcher. My ancestors were guardians of the ghetto wall in Chortkov. And I believe Hashem (God) actually gave me that name. One of my roles, very important in the United States senate, is to be a shomer — to be a or the shomer Yisrael. And I will continue to be that with every bone in my body … ”

As the warmongering nuclear armed state of Israel and its sell-outs in the “U.S.” Congress and White House move the world towards another unnecessary war for a Greater Israel, we need to figure out how to strike at the root of this deadly problem before it is too late. It appears that the American founder and Deist, Thomas Paine, gave us the answer in his eye-opening and powerful book, The Age of Reason, The Complete Edition. In this book he called for a revolution in religion based on our God-given reason and Deism. If we do that all the entanglements between Israel and the U.S. would be struck with a powerful blow at their most fundamental level. This would eventually forever correct this ancient, destructive and unnecessary problem.