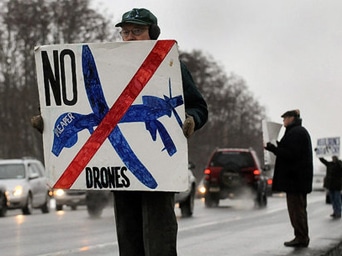 An Ex-Marine Turned Pacifist Now One of The “HANCOCK 33”

It’s been a long journey for Russell Brown, 65, from the days when he fought with the Fourth Marines in Viet Nam, to becoming one of the “Hancock 33” protesters against drone warfare. Last April 22, he was arrested walking en route to Hancock Air Force Base, just outside of Syracuse, N.Y., where General Atomics-made MQ-9 Reapers, the deadly unmanned aerial vehicles(UAV) that fire Hellfire missiles, dot the runway. The protesters would have liked to serve an indictment for war crimes on the base commander and President Obama, et al, and to reach Hancock’s 2,000 employees with their pacifist message, but the authorities were not going to have any of that.

Onondaga County sheriffs stopped them and told them they were all under arrest. “They said we were marching or parading without a permit,” Brown says. “Eventually they offered most of us an opportunity to sign a waiver agreeing to not sue them for false arrest. I believe two people signed, 33 remained arrested. Then they stopped arresting any more people.” The protesters were halted while walking in a long, thin line toward the base, Brown says, and were not obstructing traffic. (“It was a real violation of the First Amendment.”) Brown adds, the U.S. Government likes to try the pacifists before a judge so that “juries don’t learn the U.S. is committing war crimes.”

“I lost my religion in Viet Nam,” says Brown, a soft-spoken, hazel-eyed avuncular figure who ties his long white-brown hair in a ponytail with red rubber bands and sports a T-shirt that proclaims, “I Wish To Live Without War.” He thought at the time, “If God is all-good and all-wise, what am I doing holding a dead baby?” Brown, of Buffalo, N.Y., enlisted in the Marines in 1966 “without a lot of forethought” to get a two-year hitch “over with” and return to civilian life. “I was a very naive guy,” he recalls reflecting on that youthful decision. And what he saw in Viet Nam has haunted him ever since.

“A sniper shot at us from about 300 yards across a rice paddy and everybody shoots back and when we get over there it’s all dead women and children. We made a mistake. That really opened my eyes. If you can make a mistake at that distance so can a drone operator sitting on this side of the Atlantic make a mistake and kill a person in Afghanistan.”

In Nam, Brown saw Marines kicking prisoners in the head. “One guy shot an old woman right in the face and killed her. Atrocities were an ongoing thing. It was constant, and I never spoke about it when I saw something wrong. And there were a lot of people like me who knew something was wrong but did not speak out. Now when I see outrageous injustice I I feel compelled to speak out. Imagine, two million people died! I saw them cutting the ears and fingers off the dead.They took their rings. And all the time I kept quiet.”

Brown says men aren’t natural-born killers but “have been impacted by their Marine training to do it so that they think shooting people is like killing squirrels.” One incident that perturbed him was when he was shot in the neck and a medical officer delayed treating him until after the officer finished bawling out a subordinate. Two weeks after he was patched up Brown was back in the line. Not long after his discharge, Brown at last began to speak out about what he saw. His first arrest for protesting the war came in 1971 but he did not serve prison time.

Brown took a job in the Buffalo post office, where he worked a variety of jobs for 22 years and then retired. During that period he married, and raised a family yet found time to continue his activism. Recently, Brown traveled to Washington to attend an international drone conference. While he was there he took the time to hold up a “Stop Killer Drones” placard outside each media outlet (ABC, NBC, Fox) where Obama counterterrorism advisor John Brennan happened to be speaking. “He (Brennan) was admitting for the first time Obama was doing drone assassinations,” Brown pointed out.

Brown thinks the drone killings are ugly for a number of reasons: First, the CIA pays people to identify suspected terrorists who may not be terrorists at all but may have been turned in for the money. Second, “You see a car but you don’t know if they have the guy that they are targeting inside or who else is in the car with him.” Third, “Who gave us the right to assassinate people anyhow? Those (attacks) are all war crimes. You can’t separate who’s civilians and who’s enemy.” Brown asks, “How would we Americans feel if somebody was targeting us and killing our children? They (the Pentagon and CIA) are only making more enemies.” Finally, Brown objects to the use of drones in countries “where we are not at war—in Yemen and Somalia and Pakistan.”

(The British-based Bureau of Investigative Journalism estimates the U.S.

has killed some 3,000 people in 319 drone strikes. Of these, 600 were civilian bystanders and approximately one in four of those were children.)

Asked why, compared to the Viet Nam war, the peace movement today appears to be so feeble, Brown replied, “My theory is that when Obama got elected all these liberals who opposed Bush were happy to have a guy in the White House who could speak English and who they thought would change things. But that’s changing. As much as they want to look the other way, they realize what Obama is doing is wrong. “He’s a war criminal. He’s responsible for lots of killing. Obama’s not even good on domestic policy. He’s done a lot more damage than Bush ever did.”

Brown adds, “I hate to be so cynical but you get more and more cynical whatever Obama says. He’s the perfect candidate for the conservative elite of this country.” For all these reasons, Brown concludes, “I am considering voting for (Dr.) Jill Stein,” the presidential candidate of the Green Party, “if I voted for anybody.” But, he adds cautiously, “I have to vet her first.”

Brown has been ordered to appear June 14th in Onondaga County Court, DeWitt, N.Y. At that hearing, he says, a judge likely will decide whether he is able to represent himself in court as he wishes to do. The actual trial will come sometime later. Brown says his case is one of “civil resistance” as it is the government that is breaking the laws. This contrasts with the civil rights movement of the Sixties, he says, when protesters engaged in civil disobedience—-i.e., they knowingly violated laws on the books they deemed to be wrong. “Now, we’re trying to stop the government from breaking laws” (such as the Charter of the United Nations) which is also the supreme law of the land.

However Brown’s case turns out, USG is dealing with one implacable citizen, a man who has seen the criminal operation that is militarism up close and from the inside and who is willing to be arrested to defy it, a man who refuses to allow himself to be intimidated.

Sherwood Ross is a Miami-based public relations consultant who writes on miitary and political topics. Reach him at [email protected]