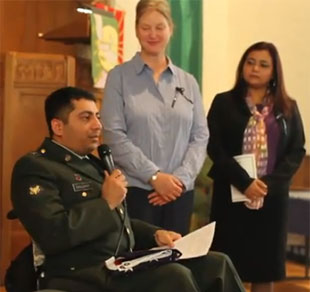 They say that no good deed goes unpunished. Zahid Chaudhry is learning that the hard way.

Listen to my interview with Ann and Zahid Chaudry from last year . Yesterday’s interview will soon be posted at www.americanfreedomradio.com.

A Pakistani national who served in the US Army, suffered a disability, and was honorably discharged, Chaudhry approached the Yakima, WA Police Department in 2001 to volunteer as an emergency reserve volunteer – the folks who get cats out of trees and otherwise lend a hand, as needed, to their local police.

Unfortunately for Chaudhry, an over-zealous cop there wasn’t interested in help from Muslims. Instead, he launched a campaign to get Chaudhry deported. The excuse? According to the cop, Chaudhry falsely claimed to be a citizen on his volunteer application.

In fact, Chaudhry did not answer the written question asking, in a great many words, “Can you produce evidence of citizenship status?” He was not sure what it meant. But later, someone apparently answered the question for him, by checking the “yes” box. (All of Chaudhry’s answers used an X; only the citizenship question was answered with a check mark, and a handwriting expert has testifies that the check mark was not made by Chaudhry.)

Though he had not even answered the ambiguously-phrased “citizenship” question, Chaudhry later was subjected to deportation proceedings whose only evidence against him was the false claim that he had lied about his citizenship status by checking the “yes” box on that volunteer application.

In reality, Chaudhry was not going to personally profit from becoming a Police Community Volunteer. He had nothing to gain from helping get cats down from trees, gratis. He had no motive to falsify his citizenship status.

What apparently happened was that Chaudhry didn’t understand the ambivalent phrasing of the question, and left it blank. Later, a Ku Klux Kop forged the document by checking “yes” beside the question, in an attempt to set Chaudhry up for deportation.

The Chaudhry deportation case would seem to be a clear violation of the First Amendment, which prohibits the government from treating people differently based on their religion. It is impossible to imagine any disabled Jewish veteran (yes, there may be a few of them out there somewhere) being deported for volunteering at their local police department. If such a thing happened, that Ku Klux Kop would quickly be gone, never to work in this town again. Yet in the post-9/11 “open season on Muslims” era, no good deed – provided it is done by a Muslim – goes unpunished.

VETERANS: SUPPORT THEM DON’T DEPORT THEM!

The Keep Zahid Home Campaign & Justice for Chaudhry committee is gearing up for the rally to support Zahid & Ann at the Seattle Deportation (Immigration) Court. Join with many other community members to show we want to keep Zahid here.

WHAT: Rally & vigil in front of Seattle Deportation (immigration) Court building & pack the courtroom for hearing.

WHEN: Thursday, May 24th

(Signs with sticks may not be brought into the building, so may stay in cars/vans after the vigil.)

(A few signs are already made; but feel free to bring more.)

Make copies of this flyer & distribute.