Home Government Obama and Bibi: YES YOU CAN End the Occupation 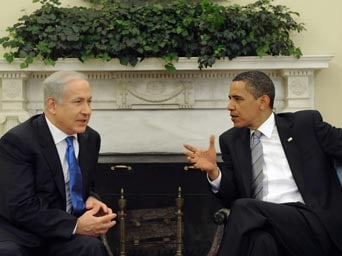 In the early morning hours of May 8th, the climax to the clandestine political maneuvering that realigned Israeli political parties with Prime Minister Binyamin Netanyahu’s left turn merging with Kadima, – was barely noted by US Media.

Netanyahu’s largest opposition party, led by Shaul Mofaz, joined his coalition and as Deputy PM, he could be the escape valve and jump start needed in regards to negotiations with the Palestinians.

Netanyahu had been in bed with parties to the far right; such as the anti-Arab party led by Foreign Minister Avigdor Lieberman, who has failed to engage any Arab leader in talks, and that has reaped Israel nothing but bad PR.

However, Mofaz not only accepts a two-state solution, he has been promoting his own plan, which advocates the immediate creation of a Palestinian state on 60% of the land captured by Israel during the war of 1967, as a step towards an eventual state based on the pre-war borders adjusted with land swaps.

Mofaz is also a former army chief and in the role as deputy prime minister he is now charged with the responsibility for drawing the Palestinians back into talks.

Only a viable and sustainable Palestinian state will equate to security for Israel; and as Palestine has always been in the belly of Israel, politicians who want to maintain power had better seize these days and End the Occupation for the times have already changed.

Coupled with last Sunday’s announcement of Egyptian mediated talks between Hamas and Fatah, their reconciliation could well result in the unity government that Hamas TRIED to form in 2006-but as the West and Israel put the kybosh on it then, we are where we are now and the only way out is always forward.

In the 2012 Country Ratings Poll, conducted by GlobeScan/PIPA for the BBC, 24,090 people around the world were asked to rate countries as “mostly positive” or “mostly negative.”

“The most negatively rated countries were, as in previous years, Iran (55% negative), Pakistan (51% negative), and Israel and North Korea (both 50% negative).”

The detailed report elaborates that evaluations of Israel’s influence in the world, worsened in 2011, except in the US, Nigeria and Kenya.

For those with negative views of Israel’s influence in the world, the main reason explaining their negative rating (45%) was due to Israeli foreign policy.

The US Government credits Khalid Sheikh Mohammad as the mastermind of 9/11 and his involvement, “By his own account stemmed from his violent disagreement with U.S. foreign policy favoring Israel.” [1]

Abdulmutallab’s attempt to blow up a plane on Christmas Day in 2009, was fueled by “his sympathies toward the Palestinians and anger over Israel’s actions in Gaza.” [Ibid]

NO way can their actions be justified but because US foreign policy aids, abets, and enables Israel’s military occupation of Palestine as well as its Nuclear Apartheid and the US Media has colluded by way of silence/non-reporting, this author and reporter, who is now a candidate for US HOUSE issued this invitation to Nationwide US NEWS DESKS yesterday:

JERUSALEM, May 22, 2012 /PRNewswire/ — Eileen Fleming, author, reporter and now a candidate for US House of Representatives from Florida, is seeking to pass the torch she picked up in June 2005, when she began documenting the ongoing saga of Mordechai Vanunu, Israel’s Nuclear Whistle Blower.

In 1987, Vanunu was convicted of espionage and treason. Fleming contends he was only guilty of telling the truth regarding Israel’s 7-story underground WMD Facility at Dimona in the Negev Valley.

The court hearing for Vanunu’s latest Appeal is also the first case to be brought under Israel’s Citizenship Revocation Law, which allows the courts to strip Israelis of citizenship if they have been convicted of espionage or treason:

The restrictions that have held Vanunu captive since he emerged from 18 years in a windowless tomb sized cell on 21 April 2004 come from the Emergency Defense Regulations, which were implemented by Britain against Palestinians and Jews after World War II.

After WW II, Attorney and Israeli Minister Of Justice, Yaccov Shapiro, described the Regulations as “unparalleled in any civilized country: there were no such laws in Nazi Germany.”

Vanunu replied, “The reason given is security but it is because Israel is not a democracy unless you are a Jew. This administration tells me I am not allowed to speak to foreigners, the Media, and the world. But I do because that is how I prove my true humanity to the world. My freedom of speech trial began January 25, 2006 for speaking to the media, the same day as the Palestinian elections…When I decided to expose Israel’s nuclear weapons I acted out of conscience and to warn the world to prevent a nuclear holocaust.”

In April 1999, thirty-six members of the US House of Representatives signed a letter calling for Mordechai Vanunu’s release from prison because they believed “we have a duty to stand up for men and women like Mordechai Vanunu who dare to articulate a brighter vision for humanity.”

Fleming agrees and adds, “The Media’s duty is to seek the truth and report it.”

Not so long ago America was guilty of the ethnic cleansing of American Indians and the negation of equal human rights to women and to those who had once been known as “Negroes.”

I echo Abraham Lincoln who also was “a firm believer in the people. If given the truth, they can be depended upon to meet any national crisis. The great point is to bring them the real facts.”

And because if I can’t laugh and “if I can’t dance it’s not my revolution” this rendition of REVOLUTION:

With these few edits:

IF YOU WANT MONEY FOR MINDS THAT HATE-ALL I CAN TELL YOU BROTHER IS NO WAY!!!

I don’t want to change the Constitution-

I want to honor the Declaration that holds “these truths to be self-evident: That all [people] are created equal; that they are endowed by their creator with certain unalienable rights…that, to secure these rights, governments are instituted among [people] deriving their just powers from the consent of the governed; and, whenever any form of government becomes destructive of these ends, it is the RIGHT of the people to ALTER or to ABOLISH it.” -July 4, 1776, The Declaration of Independence.

Is my campaign song because it comes on slow and soft and builds to a smokin’ climax.

I am Eileen Fleming and I approve of all of my messages.