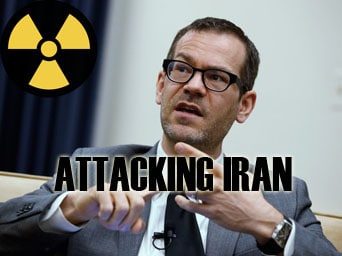 “A unilateral preventive attack” on Iran by the United States would be viewed by many countries “as a breach of international law,” a former high American Defense Department official has warned his country.

“Given the high costs and inherent uncertainties of a strike, the United States should not rush to use force until all other options have been exhausted and the Iranian threat is not just growing but imminent,” writes Colin Kahl, former U.S. Deputy Assistant Secretary of Defense for the Middle East during the 2009-11 period.

Writing in the March/April issue of “Foreign Affairs,” Kahl points out the Iranians “have not taken” any of the steps “which would signal that (Iran) had decided to build a bomb.”

What’s more, “there is no hard evidence,” Kahl writes, “that Supreme Leader Ayatollah Ali Khamenei has yet made the final decision to develop them (nuclear weapons).”

Additionally, Kahl writes, it’s the opinion of David Albright, president of the Institute for Science and International Security, Washington, D.C., that there is a “low probability” that the Iranians would actually develop a bomb over the next year even if they had the capability to do so.”

So far, based on Kahl’s data, the buildup of military forces that typically precede an outbreak of hostilities appears to be heavily weighted on the American side.

“On Iran’s eastern flank,” he continues, Washington has another 90,000 troops deployed in Afghanistan and thousands more supporting the Afghan war in nearby Central Asian states.”

Kahl says that even if, in the event of war the U.S. Navy could keep the Strait of Hormuz open to shipping, “the mere threat of closure could send oil prices soaring, dealing a heavy blow to the fragile global economy.”

Kahl writes that a U.S. attack on Iran could shift regional sympathies to Tehran’s favor and “resuscitate its status as the champion of the region’s anti-Western resistance.”

The author warns of the volatility of the current situation, particularly as “the two countries share no direct and reliable channels for communication, and the inevitable confusion brought on by a crisis would make signaling difficult and miscalculation likely.”

“The truth is that a military strike intended to destroy Iran’s nuclear program, if managed carefully, could spare the region and the world a very real threat and dramatically improve the long-term national security of the United States.”

Another American authority attacking the idea of a preventive war against Iran as advanced by Kroenig, is Stephen Walt, Professor of International Relations at Harvard University’s Kennedy School of Business.

Walt writes on the website of Foreign Policy” magazine on June 21, 2012, that “if it would be that easy for a nuclear-armed Iran to coerce the United States into doing things it does not want to do, then why haven’t other nuclear powers been able to do that to us in the past?”

“By Kroenig’s logic, the Soviet Union should have had a field day pushing us around during the Cold War. But that did not happen; in fact, the Soviets never even tried to use their huge nuclear arsenal to coerce us. The reason, of course, is that Soviet threats would not have been credible because any attempt to carry them out would have led to national suicide. The same logic applies to Iran. We know it, and so do they, which is why this familiar bogeyman should not be taken seriously.”

Sherwood Ross is a American who formerly reported for the Chicago Daily News and wire services and was active in the civil rights movement. Reach him at [email protected])