Home Veterans US Slave of Extremist Likud Zionism in Mideast 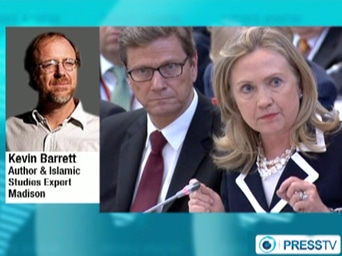 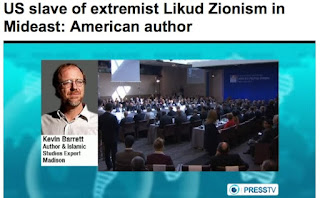 US slave of extremist Likud Zionism in Mideast: American author

An American author and Islamic studies expert says the United States is the slave of the cause of the extremist Likud Zionism that seeks to destabilize the entire Middle East, Press TV reports.

Kevin Barrett said in an interview with Press TV on Saturday that Washington and its allies have “all rallied to the cause of extremist Likud Zionism trying to destabilize the entire region.”

“I think the Likudniks want to plunge the Middle East into a big war, which would allow them to finish the ethnic cleansing in Palestine and to escape prosecution for 9/11 and the wars it triggered,” Barrett said, referring to the Israeli Likud party led by Prime Minister Benjamin Netanyahu.

The American expert also stated that the current turmoil in Syria is “an orchestrated attempt to destabilize a country by the US and its Israeli partner, although partner is not really the word.”

“I think master and slave is more the relationship (between Tel Aviv and Washington) these days.”

Barrett’s comments come at a time when the anti-Syria Western governments have been calling for Syrian President Bashar al-Assad to step down.

On June 3, President Assad said Syria is “facing a war from abroad,” and that attempts are being made to “weaken Syria, [and] breach its sovereignty.”