Home Government The United States of Israel and the 2012 Election 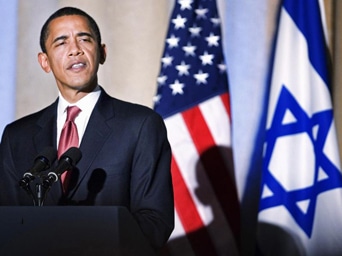 iVoteIsrael is a diverse group of Americans who currently reside in Israel. We come from all over Israel, and all over the US. We are deeply concerned about the safety, security and future of Israel. Most importantly, we want to see a President in the White House who will support and stand by Israel in absolute commitment to its safety, security and right to defend itself.

“Americans for Jerusalem” is a registered 501(c)4 and will run the iVoteIsrael Campaign – with the “desire to see a Congress and Administration who will support and stand by Israel in absolute commitment to its safety, security and right to self-defense.”

On June 5, sixteen year Jewish, Democratic incumbent, Rep. Steve Rothman was defeated in the Democratic primary by Rep. Bill Pascrell. The Arab American Forum, an anti-Israel organization with a goal of de-legitimizing Israel actively campaigned on behalf of Rep Pascrell and claimed to have registered more than 1,000 voters, mobilized another 10,000 and raised $100,000 for Rep. Pascrell. The AAF claimed record breaking voter registrations of Muslims and Arabs in NJ and that interest in this election has been record setting on many fronts.

The President of the AAF, Aref Assaf accused Rep. Rothman of putting the concerns of his NJ constituents second to the concerns of the Israeli government with his accusation of, “Loyalty to a foreign flag is not loyalty to America.”

Among Rothman’s ‘crimes’ was that he signed J-Street’s ‘Gaza 54 letter‘ which included condemnation of Israel with regard to Operation Defensive Shield.

A Little History of Operation Defensive Shield Every American Needs To Know:

On April 3, 2009 the President of the United Nations Human Rights Council commissioned a fact-finding mission “to investigate all violations of international human rights law and international humanitarian law that might have been committed at any time in the context of the military operations that were conducted in Gaza during the period from 27 December 2008 and 18 January 2009, whether before, during or after.”

The Council appointed the Jewish Justice Richard Goldstone, a South African Constitutional Court judge and the former chief prosecutor of the United Nations International Criminal Tribunals for Rwanda and the former Yugoslavia.

Justice Goldstone issued the 575-page report on September 29, 2009 and the Goldstone Report accused both Israel and Hamas of war crimes perpetuated during the 22 days of assault on Gaza which began two days after last Christmas day, when the Israeli military launched Operation Cast Lead; a full-scale attack on Gaza that killed 13 Israelis and 1,400 Palestinians.

Over 5,000 Palestinians were injured, 400,000 were left without running water, 4,000 homes were destroyed, rendering tens of thousands who are still homeless because of Israel’s targeted attacks upon them, their schools, hospitals, streets, water wells, sewage system, farms, police stations and UN buildings.

The 22 days of Israel’s attack on the people of Gaza was enabled by US-supplied weapons and we the people of the US who pay taxes provide over $3 billion annually to Israel although Israel has consistently misused U.S. weapons in violation of America’s Arms Export Control and Foreign Assistance Acts.

America is the worlds largest arms supplier to Israel and under a Bush negotiated deal with Israel which Obama signed onto; we the people who pay taxes in America are to provide another $30 billion in military aid to Israel over the next decade.

During the 22 days of Israeli assault on Gaza, “Washington provided F-16 fighter planes, Apache helicopters, tactical missiles, and a wide array of munitions, including white phosphorus and DIME. The weapons required for the Israeli assault was decided upon in June 2008, and the transfer of 1,000 bunker-buster GPS-guided Small Diameter Guided Bomb Units 39 (GBU-39) were approved by Congress in September. The GBU 39 bombs were delivered to Israel in November (prior to any claims of Hamas cease fire violation!) for use in the initial air raids on Gaza. [1]

In a 71-page report released March 25, 2009, by Human Rights Watch, Israel’s repeated firing of US-made white phosphorus shells over densely populated areas of Gaza was indiscriminate and is evidence of war crimes.

During the 22 days of attack on Gaza, the UN Security Council, Amnesty International, International Red Cross, and global voices of protest rose up and demanded a ceasefire, but both houses of Congress overwhelmingly endorsed resolutions to support a continuation of Israel’s so called “self defense.”

In November 2006, Father Manuel, the parish priest at the Latin Church and school in Gaza warned the world:

“Gaza cannot sleep! The people are suffering unbelievably. They are hungry, thirsty, have no electricity or clean water. They are suffering constant bombardments and sonic booms from low flying aircraft. They need food: bread and water. Children and babies are hungry…people have no money to buy food. The price of food has doubled and tripled due to the situation. We cannot drink water from the ground here as it is salty and not hygienic. People must buy water to drink. They have no income, no opportunities to get food and water from outside and no opportunities to secure money inside of Gaza. They have no hope.

“Without electricity children are afraid. No light at night. No oil or candles…Thirsty children are crying, afraid and desperate…Many children have been violently thrown from their beds at night from the sonic booms. Many arms and legs have been broken. These planes fly low over Gaza and then reach the speed of sound. This shakes the ground and creates shock waves like an earthquake that causes people to be thrown from their bed. I, myself weigh 120 kilos and was almost thrown from my bed due to the shock wave produced by a low flying jet that made a sonic boom.

“Gaza cannot sleep…the cries of hungry children, the sullen faces of broken men and women who are just sitting in their hungry emptiness with no light, no hope, no love. These actions are War Crimes!”

Children of American citizens born abroad (even if they have never resided in the U.S.) are eligible to vote in all federal elections in 22 States (Arizona, Colorado, Connecticut, Delware, Georgia, Hawaii, Illinois, Iowa, Massachusetts, Michigan, Nebraska, New Hampshire, New York, North Carolina, North Dakota, Ohio, Oklahoma, Rhode Island, Tennessee, Washington, West Virginia, Wisconsin) and the District of Columbia. Even if your state does not appear on this list you are still encouraged to send in an application.

As an American citizen you have a legal right to vote in all elections. As an Israeli-American, the next President and Congress will probably have a significantly more profound impact on your life and security than the average American.

Whether we like it or not who wins the US presidential election has a big influence on the State of Israel. As Israel’s best ally and biggest supporter, we need to make sure that the United States has someone running the country that has the best interest of Israel in mind.

As I read “IT’S EVEN WORSE THAN IT LOOKS: How The American Constitutional System Collided With The New Politics of Extremism” co-authored by political science scholars, Thomas E. Mann and Norman J. Ornstein, I imagined our Founding Fathers rolling over in their graves over today’s lack of vision, dual citizenship’s and corporations who have become people under the god of rigid conservatism.