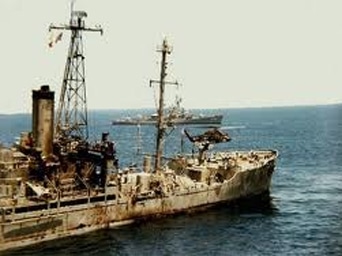 This article made possible by Ernie Gallo, Ron Kukal and Larry Broyles, Sr.

Ernie Gallo worked for the CIA for twenty-nine years after serving on the USS LIBERTY as a Second Class Petty Officer and Communications Technician. Ernie also served as a President of the USS Liberty Veterans Association and is the founder of the Liberty Foundation. Ernie provided this reporter and candidate for US HOUSE hard copies of written statements from some of the LIBERTY survivors and I begin with the first written on Saturday, 10 June 1967 on stationary imprinted with “USS LIBERTY AGTR-5” from Ensign John, from which I excerpt:

I AM ALIVE AND UNHURT. I cannot begin to tell you all that has happened to us. It seems so unreal.

The entire crew was magnificent in their efforts to save the ship.

We were steaming unescorted about 15 miles off the Suez Canal-we were in international waters!!

At about 2:00 PM we were first hit by jet fighters craft, which first went for our guns- 4 50cal. Machine guns.

Every man save one on the guns was killed in a matter of minutes.

Next the aircraft hit the bridge area.

Wounded the C.O.-killed the executive officer and the navigator.

Everybody else was either wounded or killed on the bridge.

Only three men were left standing.

Next they hit our antennas and our radio station.

All our boats and inflatable life rafts were hit—most destroyed.

It was a well-planned and coordinated attack.

We had been shadowed by the planes and PT boats all morning.

Our FLAG was hoisted.

I don’t see how they made a mistake.

It was too well planned and coordinated—they knew exactly where to hit us– and they did.

Next we were attacked by 3 patrol crafts.

The next one hit us forward starboard side on the 3rd deck.

It hit 20 feet from Damage Control Central-my Battle station-it dislodged cabinets-threw books everywhere and knocked us flat on the deck.

A watertight bulkhead saved us [two phone talkers and myself].

We patched up all holes in hull except torpedo hole-12’ by 15’ and righted the ship.

One more torpedo hit and we would have gone down.

About a third of the crew is wounded…25 men were caught in the flooded spaces…never had a chance to escape.

We are heading for Malta…

Thanks to Ron Kukal who had been a First Class Petty Officers and Communications Technician on board the USS LIBERTY, I was connected by email to Larry Broyles, who wrote:

I have known Ron for 45 years; however, if we have ever met we didn’t know each other at the time.

I have seen pictures and I know Rons’ voice, however we have never officially met each other.

I realize this sounds some what strange, but this is the truth!

I was a member of the Rescue, Damage Control and Repair Team that boarded the USS Liberty on the early morning hours of June 9, 1967!

My ship the USS DAVIS  DD937 was the first US Navy ship on scene, we went along side the Liberty and secured both ships together and immediately the Medical personnel boarded first and went to work on the injured crew.

I was part of the 17 member Team that remained aboard the Liberty until we got her to Valletta, Malta, some 6 days later.

Our Team made repairs to get the ship back underway, however, our major obstacle was a ballooned bulkhead– this is a steel wall that is between compartments (rooms) in a ship, as you know when you blow up a balloon it bulges out, so this steel wall received a tremendous blast from the torpedo and caused the steel wall to bend outward like a balloon.

This wall was stretched and had some cracks and small holes in it and could giveaway at any time and the ship would of most likely sunk!

If that bulkhead had given way while we were repairing the steel wall-we wouldn’t be here today!

The Davis Team and a couple Liberty crew was secured below decks in a compartment with the ballooned bulkhead and we all remained all night shoring that bulkhead so it wouldn’t give way during our 1000-1200 miles trip to Malta.

Shoring is a Navy word for establishing a repair procedure for the stress stretched steel wall that was below decks!

What we had to do was weld metal brackets to the deck (floor) in numerous places, as this steel wall was probably 20′ wide and 9-10′ tall.

Our Engineer designed the overall shoring that was required to be placed at strategic strong points on the stretched wall so the shoring would help relieve some of the pressure on the steel wall.

The entire stretched wall was braced from sidewalls to sidewalls so we could utilize maximum strength of the shoring job that we had completed during the night so the ship would not sink!!!!

I hope this helps, if not there are pictures of the shoring job we did on the Internet under the USS LIBERTY.

It was a very long night and a lot of work was accomplished, however the next morning when we finished our job and we were released from the secured compartment, we all were certainly glad to come from below decks and get fresh air and thank GOD for keeping us safe during that tasking!

I have seen the USS LIBERTY AGTR-5 and all of the destruction, bullet holes, rocket holes, torpedo hole, blood and fuel mixture, napalm burns and horrifying scenes of the wounded laying all over the Mess deck tables, beside the tables laying on the floor and the ones that was killed during the attack and others after the attack that passed on from injuries.

Ron is absolutely correct when he says that God was with the Liberty that day, and I believe it myself with all my heart.

I will be glad to see justice and Honor bestowed upon all of the Liberty Crew, the dead and the survivors, they all were Heroes’ and will always be in my eyes!

They are my Shipmates!!!
Larry Broyles, Sr.
USS DAVIS, DD937

When I emailed Ron the first draft to the above and told him I wasn’t feeling the title or the ending and I would have to sleep on it, so if he had any suggestions to please offer them.

In this morning’s email Ron responded:

Do you remember that old song, “There’s a Star Spangled Banner Waving Somewhere”?

I have no title but for some reason that song keeps running through my head.  It won’t go away. The song is more then likely fifty years old.

That title whatever it is seems to have that song interwoven within it. Maybe you don’t know it or have never heard it.

Pull it up on your computer sung by Hank Snow. Guaranteed to inspire…

In Solidarity YES WE WILL and YES WE CAN See JUSTICE and HONOR done unto the USS LIBERTY!
I am Eileen Fleming for US HOUSE and I approve of all of my messages.