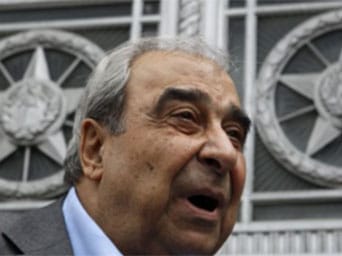 Syrian Opposition: No Change in Russian Support of Assad

Members of the Syrian National Council opposition group met with Russian Foreign Minister Sergei Lavrov Wednesday in Moscow, but admitted afterward that Russia, Syria’s main ally, has not given up its support of Assad’s government.

Lavrov reaffirmed on Wednesday Russia’s position that both the government and opposition must halt all violence and that the Syrian people must decide the future of their country.

But opposition leader Abdelbaset Sieda told reporters after the meeting that Russia still insists peace can be achieved without Assad leaving office. Sieda’s opposition group says Assad must step down if the nation’s political conflict is to be solved.

U.N. envoy Kofi Annan is scheduled to brief the Security Council on Wednesday, following his talks on the crisis earlier this week with Syrian, Iranian and Iraqi leaders.