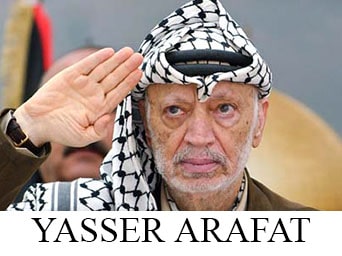 VeteransToday News Flash – July 11, 2012 – Israeli hospital sperm banks are considering not accepting any sperm donations from Israeli men because the quality is so uniformly poor.

This is a result of twenty years of nuclear war and uranium weapons use in western Asia (aka: the Middle East,) and Central Asia.

(San Francisco) Yasser Arafat died Nov 11, 2004. Mr. Arafat was recognized throughout the world as the leader of the Palestinians.

That is why nuclear governments use Polonium for assassinations, it is undetectable after a defined period of time.

All possible traces (individual molecules) of any alleged Polonium that may  allegedly been used to kill Mr. Arafat had turned to miniscule pieces of lead by June 2, 2012, which we all have in us, naturally.

The allegation that Mr. Arafat was assassinated by the killer Polonium does not hold water. It is known that Polonium is used by nuclear governments to kill selected people.  At this date there is no way to prove Polonium was used to assassinate Mr. Arafat.

I do not dispute the word of the good people who were informed Polonium was the killing tool. I do wonder who put Polonium on Mr. Arafat’s things and perhaps even in his corpse many years after his death.

There is no other way on this planet for Polonium to be on Mr. Arafat’s things and/or in his body now.

This episode did create a worldwide stir and the death, or suggested state murder, of Mr. Arafat served as a diversion for millions and even billions of people.

Diversion from what and at whose order? The only likely suspects are the several nuclear weapons labs of the nuclear nations.

Why did government “experts” and everyday nuclear physicists let this charade go on? This whole thing is just plain wrong.

“LONDON, Nov. 24, 2006 — The British authorities said today that Alexander V. Litvinenko, a former Russian K.G.B. officer and foe of the Kremlin, died of radiation poisoning here in what a senior official called ‘an unprecedented event.’”

Mr. Livenchko was killed in London by Polonium administered by unknown assassins.

3. Duration calculation results From and including: Thursday, November 11, 2004.

To and including: Monday, July 9, 2012
It is 2798 days from the start date to the end date, end date included
Or 7 years, 7 months, 29 days including the end date
http://www.timeanddate.com/date/duration.html

4. “Was Yasser Arafat killed by radioactive poison?” The Independent, London, UK. “Body of former Palestinian leader may be exhumed after polonium is found on clothes…”

Researchers warn of rapid decline in quality of Israeli sperm

According to research at the Hadassah University Hospital-Mt. Scopus, continued decline could lead to the cessation of sperm-donation programs.