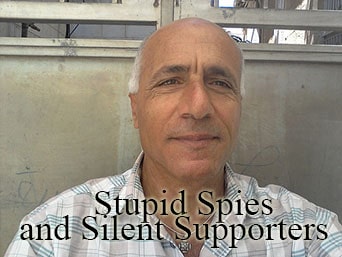 “The restrictions now renewed for the 9th year. My Lawyer Avigdor Feldman is trying to deal with the Israel authorities to find any solution to end this case, either by appeal to the court or by meeting with them. If you want to know more you can contact him, VMJC.”

I do want to know more, so I emailed Mr. Feldman and I will also email this article to him to let him know more about me.

VM stands for Vanunu Mordechai and JC stands for John Crossman the name he chose in 1985 when he was baptized Christian just weeks before being kidnapped by Mossad-Israel’s ‘elite’ spies.

As “stupid is as stupid does” the “stupid spies” failed to imagine the likes of me-an American author, reporter and now candidate for US House who has become the most outspoken supporter of Vanunu who won’t shut up about Vanunu until he is free to fade into the world instead of continuing to make headlines—even if I am the only one to write them!

Hi. You can continue to act and do for my freedom as much as you can-no one can stop you. Freedom NOW!!! vmjc.

I laughed because over the last seven years Vanunu has TRIED many times to get me to shut up because I have made extra trouble for him as reported in  BEYOND NUCLEAR: Mordechai Vanunu’s FREEDOM of SPEECH Trial and My Life as a Muckraker: 2005-2010

When I email Vanunu, the SUBJECT usually reads: SECURITY ALERT because the restrictions that have subjected him to 24/7 surveillance -his movements, phone calls and emails-by Israel’s SECURITY spies-Mossad/Shabak ever since he emerged from 18 years in a windowless tomb sized cell on 21 April 2004 come from the Emergency Defense Regulations, which were implemented by Britain against Palestinians and Jews after World War II.

Vaunu replied, “The reason given is SECURITY but it is because Israel is not a democracy unless you are a Jew. This administration tells me I am not allowed to speak to foreigners, the Media, and the world. But I do because that is how I prove my true humanity to the world. My freedom of speech trial began January 25, 2006 for speaking to the media, the same day as the Palestinian elections.

“When I decided to expose Israel’s nuclear weapons I acted out of conscience and to warn the world to prevent a nuclear holocaust.” [1]

I want the world to know that when I met Vanunu during my first of seven trips to Israel Palestine in 2005, I vowed to Vanunu that I would tell his story until Israel allowed him the freedom to leave the state -and I am a woman who keeps her word.

But most especially I want the world to know that Vanunu once paid me the highest compliment of my life when he told me that I was “always good to remind him of JC.”

Today in Orlando, I met with a group of Central Florida conservative Pastors who questioned me and two other candidates for US HOUSE where we stood on the issues dear to their hearts.

I responded from mine and also told them that I am a candidate of conscience for US HOUSE because “I am on a mission from God!”

When I began a series of interviews with Vanunu in 2005 during my first of seven trips to Israel Palestine, I was interested in his childhood and why he –an Orthodox Jew of Zionist parents became a Christian.

I had no clue then, that seven years later I would become a candidate and contender for Congress and remind the world that in 1999, thirty-six members of the US House of Representatives signed a letter calling for Vanunu’s release from prison because they believed “we have a duty to stand up for men and women like Mordechai Vanunu who dare to articulate a brighter vision for humanity.”

Ever since the silence from the American Government has been deafening; as has Vanunu’s most famous American supporter, Daniel Ellsberg who in 2004 called Vanunu “the preeminent hero of the nuclear era” and in 2009 added that Vanunu was his “friend, hero, and brother.”

On Daniel Ellsberg’s Facebook Wall, I posted the following comment and link on June 24, 2012 to his June 20 status update: “I just asked Ecuador to grant asylum to the founder of WikiLeaks. Please join me.”

There is no evidence as of this writing that Mr. Ellsberg has even been back to his Facebook Wall, but I seize this opportunity to remind the world again that Before Manning and Assange: There was and is Vanunu Mordechai Read more…

I also want the world to know that in 1986, Israel kidnapped Vanunu from Rome but Article 9 of the International Covenant on Civil and Political Rights states: “No one shall he subjected to arbitrary arrest or detention” including abduction of a person by agents of one state to another state.

According to Section 99 of the Israeli Penal Code, treason is defined as “an act calculated to assist (an enemy) in time of war…delivering information with the intention that it fall into the hands of the enemy.”

Vanunu gave away his photos to the London Sunday Times because Israel’s political leaders have consistently lied about Israel’s nuclear-weapons programme and he found this unacceptable in a democracy” and he wanted to prevent a nuclear holocaust.

Vanunu got 18 years behind bars and was also rendered defenseless when the court ruled that his motivations were not ideological and they refused to even allow Vanunu’s statements regarding his intentions to be considered in his defense! [IBID]

A total of 1,200 pages of transcript of Vanunu’s 1986 closed-door trial have been released.

Defense witness and the Sunday Times journalist who broke Vanunu’s story, Peter Hounam stated, “We did not pay him money, but only covered his expenses… Money did not motivate him.”

Sunday Times journalist Wendy Robbins wrote, “Mordechai never asked for nor received a single penny for his information…he blurted out the whole tale without first setting out any financial preconditions. Mordechai got nothing out of the whole episode. He never ‘sold’ Israel’s secrets-he told them.”

I want the world to know that the establishment of Israel’s very statehood was contingent upon their upholding the UN UNIVERSAL DECLARATION OF HUMAN RIGHTS and Article 19 affirms:

Everyone has the right to freedom of opinion and expression; this right includes freedom to hold opinions without interference and to seek, receive and impart  information and ideas through any media and regardless of frontiers.

I also want to make it abundantly clear that if I am elected to congress-which will be a miracle-I am on the record committed to hold this Nation to its Obligations as a Member State of the UN Universal Declaration of Human Rights-which includes holding all other Member States to their obligations: Read more…

I also want to make it perfectly clear that in 2009, Vanunu suffered another crisis of faith and fired God from his case, but as this photo attests Vanunu is back to wearing his Cross and looking very healthy in east Jerusalem on 6 July 2012, at a meeting with friends: 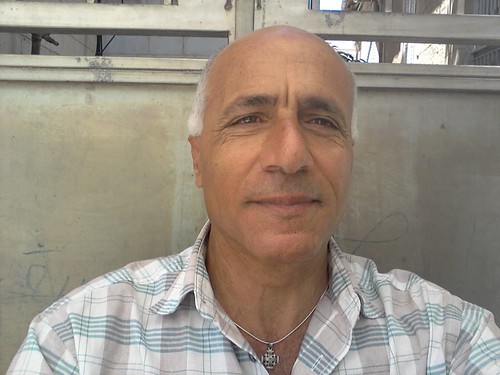 But when Vanunu taped this following Message to the World’s Media just moments before Israel sent him back to solitary confinement in 2010-the outcome of his FREEDOM OF SPEECH TRIAL- he also lambasted religion; and I want the world to know that religion without spirituality should be lambasted and rejected!

When Vanunu published that video after emerging back into the light after 78 days in solitary confinement, I left him the first comment and he readily replied:

No shame on Eileen, Because Eileen is the best of using all her freedom of speech to the limits of using as a strong power to Bring my freedom.

That Power comes from God!

I make no claim for myself other than I am just a little sister in service to The Prince of PEACE/AKA JC, and I affirm that NO WAY will I ever back down or shut up about Vanunu’s RIGHT to leave Israel, until Israel wakes up and allows him his inalienable human rights as affirmed in Article 13 of the UN UDHR:

(2) Everyone has the right to leave any country, including his own, and to return to his country.

I am Eileen Fleming for US House and I approve of ALL of my messages.