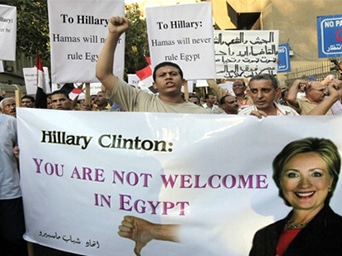 “There was something huge brewing up, which Mrs. Clinton was not informed with, awaiting her arrival”           … by Dr. Ashraf Ezzat

When president Obama visited Egypt in June 2009, and gave his famous and good for nothing speech for the Muslim world from the big reception hall at Cairo University, he and his team must have felt that Cairo was the quietest and most peaceful place on earth second only to the Seychelles islands.

The reason for that was so simple, but rather dictatorial; the deposed President Mubarak was so careful nothing and no one would bother the American delegation, he simply ordered the day off for all Cairenes whom were also told to stay home and not venture to go out until Mr. Obama had already boarded his flight back to the States.

Mrs. Hillary Clinton, who have been lately engaged in a diplomatic drone attacks on the Russians and the Chinese over the Syrian issue, must have thought nothing would be rewarding and relaxing like winding up her latest world tour with a visit to the historic city of Cairo.

There she would only have to do the hand shake-routine and smile back at few of the Muslim Brotherhood (MB) faces. But at the end of the day she would have all the time to enjoy sightseeing, may be the pyramids,  and indulge in the Cairene serenity, she still recalls from the 2009 visit.

Prior to Mrs. Clinton’s visit to Cairo, the usual security arrangements were meticulously gone over time and again and a full week weather forecast was submitted to help the state secretary to decide on her wardrobe during the visit.

And yes, a couple of young American tourists were kidnapped in Sinai close to the borders with Israel, to highlight the Sinai loose security issue, just in case Mrs. Clinton forgot to bring it up.

But that was not all. Something was missing. There was more to this visit than just the usual speeches, the TV interviews and the expected tranquil royal suite with the majestic view of the pyramids.

There was something huge brewing up, which Mrs. Clinton was not informed with, awaited her arrival.

In her brief and careful remarks after meeting with the newly elected president, Mr. Mohamed Morsi of the MB, instead of calling for an immediate handover of power as American officials have in the past, Mrs. Clinton instead emphasized only the need for “building consensus across the Egyptian political spectrum.”

What Mrs. Clinton did is simply add more gray to the current vague picture, whereas what most Egyptians longed for is black and white.

The White House’s struggle to deliver a satisfactory message here, for all parties involved including Israel, reflects its dilemma with how to deal with a rapidly evolving contest for power whose outcome remains yet unclear.

The American diplomacy is trying to balance a public push for a democratic Egypt against a deeply seated desire to maintain long-term ties with both factions, the generals and the Islamists, in a context where the United States seems to have virtually zero influence in post-Mubarak Egypt, and almost any American statement is sure to provoke a backlash. And provoke a backlash it did.

Thousands of anti-MB rallied outside Mrs. Clinton’s hotel, the Four Seasons, at downtown Cairo to protest what they called the American plot to help the MB to outweigh the generals and take full control of the country.

According to the protesters, the American administration unable to curb down the post-Mubarak Islamist tide, decided to use the MB to discipline Hamas (an offshoot of the international MB organization) and may be make it come to terms with Israel.

One of the protest leaders chanted, “If you like the MB so much, why you don’t take them back with you”

In the following morning, without a good night sleep I presume, Mrs. Clinton went on to meet General. Houssein Tantawy, the head of the supreme council of armed forces (SCAF) behind closed doors.

The meeting with general Tantawy was seen by some of the liberal parties as a provocative move that added to the polarization of the political scene in Egypt.

As if this was not enough of a disappointment for Mrs. Clinton, her invitation to convene with the Coptic heads was unexpectedly turned down by most of the leaders of the Christian community in Egypt.

Maybe this was just poor staff work as such meetings are always arranged in advance to avoid embarrassments to either or both parties..

“We kind of hoped Mrs. Hillary Clinton had transparently met with all parties and factions of the Egyptian political spectrum in the same room,  and not to divide and aggravate the already volatile situation by  meeting with the Salafists and the MB first and in private and then ask to meet with some of the Coptic community heads” said Emad Gad, a prominent Coptic activist.

On Sunday, and after inaugurating the new American consulate in Alexandria, all of Mrs. Clinton’s appointments and her expected visit and speech at the library of Alexandria, an event I planned to attend, were cancelled for security reasons.

The road to the library of Alexandria was practically blocked by anti-American protesters who raised shoes, a sign of disrespect, and showered Mrs. Clinton’s car with a decent quantity of Egyptian tomatoes forcing her car to turn around and head for the airport.

After almost one year and a half of the so called Arab Spring, I think it’s only fair to admit that the Europeans and the Americans were outpaced and taken by surprise by the uprisings in both Tunisia and Egypt and it was not before Gaddafi took up arms did they sober up and sent in the NATO planes.

After that they were ready, and in full gear, for Syria, where the Arab spring turned into a nightmare and a theater for all the local and international powers to play out their ugliest plans.

Till this moment, the American administration is trying to make head or tail of the post-Mubarak Egypt and May be that’s why we don’t hear the Obama’s campaign Bragging about how they got rid of Mubarak. Because, frankly, they didn’t.

As the American plane was taking off the Cairo airport and heading for Tel Aviv, I guess Mrs. Clinton started typing down the report of her two-day visit to Egypt, and her lines went as follows …

“Egyptians are not happy with our current stance, the MB are wary of our moves, and I don’t trust them either.  I’m afraid we don’t have an influence over the generals … not even by threatening to withhold the American annual aide. Anyway we’ve done it before and didn’t work.

Dealing with the Islamists will cost us. It has already turned the seculars and Copts against us.  As for the peace treaty with Israel, no robust commitment detected, and there are too many possible scenarios. … I don’t know, but I liked Egypt 2009 better.  Cairo is not tranquil nor friendly as it used to be.”