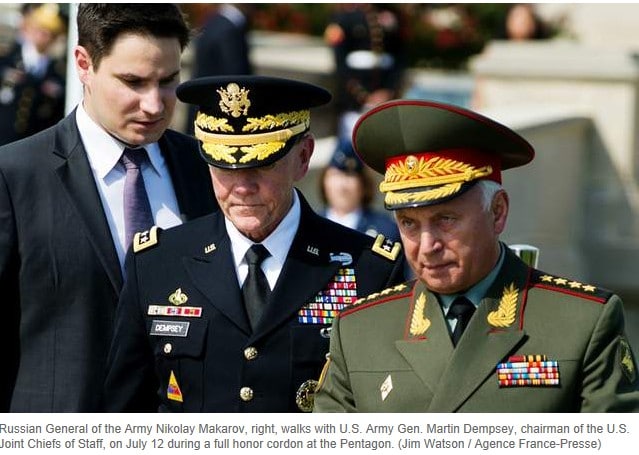 WASHINGTON — The top U.S. general on July 12 met with his Russian counterpart, giving him the red carpet treatment despite diplomatic tensions over Syria between Washington and Moscow.

U.S. Army Gen. Martin Dempsey, chairman of the Joint Chiefs of Staff, hosted a full honor cordon for Gen. Nikolai Makarov, chief of the Russian General Staff and the country’s first deputy defense minister, during which 19 salutes were fired in a rare show of pomp by the Pentagon.

The meeting between the officials and their delegations comes as Russia rejected as unacceptable the text of a Western-backed U.N. Security Council resolution on Syria, announcing it will use its veto if the draft is brought to a vote later Thursday.

Talks at the Pentagon are expected to focus on plans for a NATO-backed missile defense shield in Europe, a military source said.

Efforts to set up the ambitious project essentially based on U.S. technology have angered Moscow, which wants guarantees saying the system would not be aimed at or used against it at any time.

NATO has said the system does not target Russia but rather a threat from the Middle East, in particular Iran.

Other topics that are expected to be covered include the situation in Afghanistan, as well as the Arab Spring and Washington’s “rebalancing to the Asia-Pacific” region, the source said.

Syria could come up on the margins of the discussions.