Home Government The Drone and the Bomb 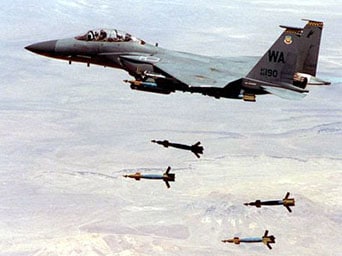 The lessons of Hiroshima and Nagasaki belong always before us.  The agony of those two cities must remain our dark beacon.

Hiroshima/Nagasaki wasn’t so much about targets as about audiences. We – or rather, the very highest reaches of the US government – annihilated a couple hundred thousand nameless, unarmed, undefended human beings to warn the world: “Don’t mess with us; we run things now.”

Thanks to its atomic prowess – showcased at H/N – for over 65 years the US has been able to hold the planet hostage. It deploys nuclear blackmail to further its corporations’ grip on the world’s resources and markets. But such gunboat diplomacy has only partially succeeded.

The Soviets soon acquired the Bomb. For nearly four decades that other evil empire terrorized us here in our previously invincible Homeland. So the pitiless logic of proliferation made us all far less safe.

Every August 6 letters to editors perpetuate the last century’s most enduring myth: the Bomb forced the fanatic, loathsome Japs to surrender. Japan would not have to be invaded. Thousands of G.I. lives were thereby saved.  Thank God for the Bomb!

Mr. Truman and the generals could have accepted Japan’s one nonnegotiable demand: to treat its divine emperor with respect. Alternatively, they could have let Japan dangle for as long as it took and then swept in to feed the emaciated and bury the dead.

Afghanistan/Pakistan/Yemen echo Hiroshima/Nagasaki. With its new cutting edge technology the Pentagon still trots out the old myth: the Reaper drone is all about “saving our boys’ lives.” And Bomb-like, the Reaper proclaims: “If you defy us, wherever you are, we will hunt you down and kill you.” Déjà vu.

Once again, clandestinely and without referendum, the Pentagon has embarked on a new era of terror. To add menace to dread, its robotic warfare comes with almost preternatural surveillance…both over there and, soon, here.

For several years the Pentagon has used high-tech robots like the Predator and the Reaper, not only for surveillance, but to blow up people and things in Afghanistan. Defying international law, the CIA uses the Reaper to assassinate nameless “bad guys” in Pakistan. In Yemen the Reaper perpetrates extrajudicial executions and even hunts down and kills US citizens. That’s what happens when your name somehow appears on White House “kill lists” reviewed by Mr. Obama himself.

The “beauty” of it is that technicians, wielding joysticks at satellite-linked computers thousands of miles from combat, pilot these unmanned drones.  They can deliver – “with laser accuracy” – their Hellfire missiles and 500-pound bombs. And do so with scant knowledge of their non-combatant victims and with no physical risk. Can anything be more disdainful of honor, more disdainful of life?

The Reaper –  piloted from, among  other places, our local Hancock Air Base – has become the Pentagon’s and the CIA’s darling. With no on-board crew, no US personnel die when the Reaper crashes or is hacked or shot down. With few witnesses, with no maimed vets and no awkward body bags shipped home, few ask: Why are we there? Who benefits? What’s our complicity? What’s become of our humanity?

So opaque is our bubble, so pervasive is the distancing, so unaccountable is drone warfare, that mission creep is guaranteed. Mission creep: the slide into perpetual warfare.

Like Japan’s hundreds of thousands of civilian casualties, the Reaper’s civilian casualties in Afghanistan/Pakistan/Yemen fail to matter. Few ask: What’s the human cost? What’s the blowback? We forget that victims anywhere surely have survivors nursing enduring hatred for the US. But – hey, not to worry! – those further security threats keep the pot boiling. And General Atomics, Lockheed and other corporate war profiteers continue to reap their billions.

One day drone missiles may strike Hancock Air Base. And if nearby communities are hit…well, aren’t we very accepting of “collateral damage”? Thanks to the Pentagon’s love affair with death – and thanks to the trillions we squander on “defense” – the world is much safer…for corporate greed. Most dare not allow themselves to see how those military contracts ravage our already depressed economy.

Fifty nations reportedly are either importing or manufacturing their own drones. This past spring the U.S. sold six weaponized drones to Italy – Italy?!  Like nuclear proliferation, drone proliferation will haunt us till the end of our days.