Turkey Breaks With Israel but Still Does Their Bidding.  Why?

The following short article was printed on the Press TV (Iran) website today.

The meaning of it is clear to those familiar with the region, and, as hundreds, perhaps thousands of journalists have worked in Iraq and the Kurdish regions, where I have also worked, the story is obvious, it just can’t be printed.

Many of “players,” the Mossad, big oil, the Bush family, are beyond the reach of the press, protected from the laws of man, empowered to play the world as a grand chessboard, to quote Zbigniew Brzezinski.

Today’s pawn is Kurdistan, unaware they are being played.

“The Iraqi government has summoned Ankara’s envoy to Baghdad in protest to a recent visit by Turkish Foreign Minister Ahmet Davutoglu to the disputed Iraqi city of Kirkuk.

Turkey’s foreign minister travelled to Kirkuk on Thursday while on a visit to Iraq’s semi-autonomous Kurdistan region. The Iraqi Foreign Ministry says Ankara must have informed it ahead of the visit. Iraq has warned that Turkey should be ready for “the results of this action” and its potential “negative effects on relations between the two countries.”

The real story is of Turkey, whose armies have entered Iraq “chasing terrorists” on many occasions, to the point their artillery would awaken me, has decided to become involved in Iraq’s internal affairs.

Kurdistan may well have a right to be a free nation.  Were it so, 70% of the land making up Kurdistan would come from inside Turkey, not just Iraq.  For decades, Turkey violently suppressed the role of Kurds within Turkey, in large regions where they make up the majority of the population.

So, what has driven the Turkish Foreign Minister, Ahmet Davutoglu, to visit Kurdish regional officials in the city of Kirkuk?

Before Saddam realigned the population of Iraq, Kirkuk, home of one of the world’s largest oil fields, was a Kurdish city.

There have been continual political confrontations over Kirkuk for years.  My personal views tend to side with the Kurds, they are my friends, some are as my own family.

However, the value of Kurdistan has changed since Israel moved in.  They had been there for many years, operating in the shadows, assassinating Christian leaders, pitting side against side but Kurdistan never joined in the civil war planned for them.

Though the beneficiary of oil revenue, a region close to the US, much closer than the government in Baghdad, Kurdistan is also close to Iran.  The current capitol, Erbil, is a growing city, clean and safe, but it has taken years to get basic services, sewers, water and electricity in place though billions have been made available.

These are projects I worked on and found a people willing and able but denied needed leadership because of greed, avarice of a few and feuding.

Kurdistan is now on the map because Israel wants it, as it wants Azerbaijan, as a staging ground for the destabilization of Iran.

Kurdistan, according to the Iraqi constitution, has no rights to give out foreign oil contracts, though they have tried often, delegations try to illegally access Kirkuk oil through Kurdistan daily, they fill the hotels.

Now with America gone, Israel’s military has moved in.

The Mossad has been there since Saddam came to power, their relationship of love and hate, more of convenience, mirrors Saddam’s relationship with the Bush family.

One moment they supply him with materials to make WMDs and tell him to go into Kuwait, the next minute they bomb and invade, though he was only obeying their commands.

Saddam was “set up.”

This is but one of a thousand reasons Bush, Cheney and Rumsfeld belong on the dock or at the end of a rope.  The proof has always been there, unpreported but simple, easy to understand and utterly damning.

Every word out of Bush 41 and 43’s mouths were lies and thousands of Americans and hundreds of thousands of Iraq’s paid while political friends of the Bush family raked in endless billions.

If remembered, hundreds of billions in aid simply disappeared while at the same time, trillions disappeared from Wall Street and America’s middle class became a memory.

Now Israel has taken over bases in Kurdistan, and the Turkish envoy treats them as an independent nation as the world moves toward an Israeli demanded invasion of Iran.

Israel has always pulled Turkish strings, it started in the 1400s when the Sultan brought the Jews of Europe to the Ottoman Empire to take over his administration and finances.  The entire Middle East and most of the Balkans were bled dry for centuries.

What is in Kurdistan?  We know Israeli drones are there.  We don’t know if fighter planes have arrived but we know fuel, aircraft servicing facilities are prepared, technicians and some military are on the ground.

We also know the government in Baghdad is powerless to stand against it with some politicians claiming to manage relations between Iran and Iraq actually under the pay of Israel.  I got to see this one “up front and personal.”

One might ask, why, after a decade of slaughter, is Iran the target of daily terror attacks?  Who does it serve?

Who would want Iraq destabilized so it could be broken apart, with the north falling under the influence of the Turks, the same Turks massing on the Syrian border as we speak?

Is the dog in Tel Aviv and the tail in Ankara or the other way around? 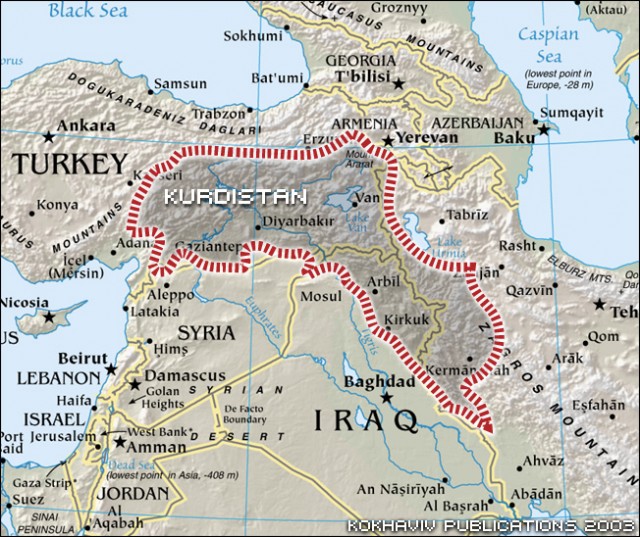 What I can say for certain is that there are no long term plans for the Kurdish people to thrive, not with the gang they are playing with. Few have suffered more, perhaps the Armenians, the Palestinians (that Turkey promised to save).

Kirkuk is about oil and the balance of power in Iraq is with Baghdad.  To me Kirkuk is a Kurdish city, one stolen decades ago in a genocide by a Bush befriended maniac.

I would expand Kurdistan.  I would take it North, perhaps 200 miles.  Kurdish leaders speak of this only in whispers, knowing the Turks could take back the limited rights Kurds there now enjoy, move the clock back.

What is the truth? Syria, Egypt, Libya, Bahrain, Saudi Arabia, Kurdistan? Any attempt by a Muslim nation to establish a representative democracy attracts the jackals.