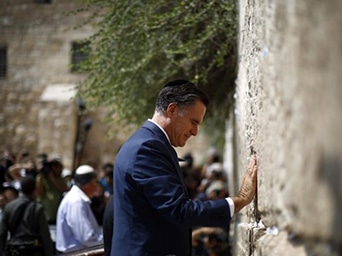 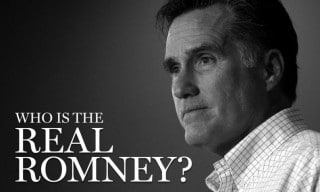 No other American presidential candidate has ever left the US to garner campaign contributions from foreign citizens.

There is a reason for this, one that Romney and his staff seem oblivious to and the mainstream media had ignored until just recently.

Using foreign contributions in any American election is a felony. Hello Romney campaign…is anybody home, hello?

Below, Fox News identifies illegal fundraising in both Israel and in London, no donor is identified, no records are kept. Gosh, does that look like someone might be trying to circumvent the law?

Romney went the whole way, personally campaigning outside the US, soliciting foreign citizens, and humiliating himself and his country with his ignorance and flagrant attempts to trade illegal cash for promises of illegal war.  One could hardly break more laws if one wanted.

Romney has raised millions in foreign cash at fundraising events across Israel and London, those that we know of so far.  One table alone gave him a million in cash.  None was from American citizens.  Fewer than 10% of Romney’s contributors in Israel are estimated to be “dual citizens.” Others may have just flown the money in.

A real question many might ask, why would a presidential candidate travel outside the US to seek campaign money at all?  As the Supreme Court points out, in the decision Bluman, et al., v. Federal Elections Commission, no foreign cash, especially collected overseas, can ever be used in an American campaign.

Here is what the New York Times reports on recent court decisions that disqualify Romney as a candidate:

In a terse four words, the Supreme Court on Monday issued an order upholding prohibitions against foreigners making contributions to influence American elections.

The decision clamped shut an opening that some thought the court had created two years ago in its Citizens United decision, when it relaxed campaign-finance limits on corporations and labor unions. On Monday the Supreme Court, upholding a lower court’s decision in Bluman, et al., v. Federal Election Commission, refused to extend its reasoning in Citizens United to cover foreigners living temporarily here.

Foreign nationals, other than lawful permanent residents, are completely banned from donating to candidates or parties, or making independent expenditures in federal, state or local elections.

The Supreme Court’s order did not discuss the merits or suggest that there was any dissent among the justices.

The iconic photo below, from the Washington Post, hands Romney out to dry: 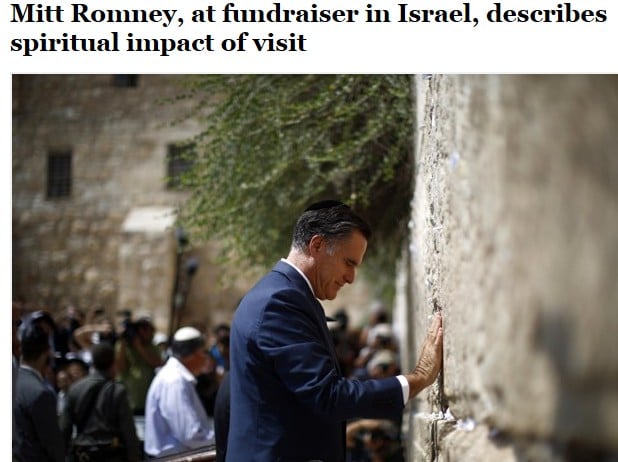 A man with some real problems to wail about;  “Please g-d, don’t let them catch me…”

Here is what the Washington Post reported on Romney’s illegal fundraising efforts inside Israel:

JERUSALEM — Mitt Romney held an intimate breakfast fundraiser here Monday with some of his campaign’s biggest benefactors, telling them about the spiritual impact his trip to Israel had had on him.

Seated around a U-shaped conference table with roughly 40 donors, with Las Vegas casino mogul Sheldon Adelson immediately to his left, Romney said he was “overwhelmingly impressed with the hand of providence.”

The presumptive Republican presidential nominee was expected to raise more than $1 million from the donors, who each were required to raise or donate $25,000 to $50,000 to attend the event. All of the donors are U.S. citizens, and many of them flew here from the United States to be with Romney during his 36-hour visit to Jerusalem.

Many of those in attendance at the posh King David Hotel are major bundlers for Romney’s campaign, raising tens of thousands of dollars from their business associates and friends. Adelson, for instance, has personally committed to giving tens of millions of dollars to a pro-Romney super PAC.

No filming, no photographs were allowed, no donor IDs were checked.

No due diligence done, only one reporter attended who surprise, surprise, had no access to donors.

This is one of many fundraisers including one in Tel Aviv just for diamond merchants as Fox reported, held in total secrecy.

We have word that Romney and Sheldon Adelson met a group of large donors from among the Jewish community of Russia who flew from Moscow to offer their financial support.

The Romney campaign had been laundering money through corporations, money moved into the US under the “Citizen’s United” decision of the US Supreme Court.

Romney figured he could then go anywhere in the world, peddle foreign policy, promise war, play president and collect cash from foreigners though this is specifically prohibited by US law.

In doing so, he is no longer qualified for office and, if challenged by Ron Paul, has no standing at the Republican Convention. With such a clear violation of law, not just blatant but massive, Romney could face years in prison.

The Romney/Bain legal team was not available for comment.

It is now for Romney to prove that not one cent of contributions collected from thousands in Israel was actually collected from Israel.  We wish him good luck with that.

One source of untapped information on Romney’s activities is his Secret Service detail. As federal law enforcement officers, though they are not directly tied to the Federal Election Commission, they are obligated to report any suspicious activity.

Considering Romney’s secret meetings with diamond merchants, many of whom are on international terror watch lists, perhaps the secret service might want to meet their sworn obligation.

Israel is now the largest source for “blood” or “conflict” diamonds, the major source of funds for terrorism, illegal arms dealing and drug trafficking in the world.

Here is how this works, taking advantage of “loopholes” purposefully written into handling procedures that let billions in illegal diamonds enter the US:

Since the KP, at least in its current form, only tracks the movements and origins of uncut diamonds, countries specializing in the cut variety of stones can churn out billions of dollars worth of diamonds each year, incubated from the sometimes awkward propriety questions the KP has been known to raise.

Due in part to this glaring KP loophole, Israel has become the world’s largest diamond exporter, with revenues from the precious stones accounting for more than a third of its total annual exports. In 2008, Israel generated $9.4 billion through diamond exports, an amount increasing annually.

Since the process of cutting diamonds removes all traceable hallmarks, cut diamonds purchased from Israel are close to impossible to track, indistinguishable from diamonds sent from South Africa, Australia or North America, and end up at major trading hubs such as New York or Hong Kong, where they are purchased wholesale by diamond sellers across the globe.

Is Fox right, is illegal diamond trafficking going to have its own president?   Are these diamond “merchants” supporting Romney or “blood diamond launderers?”

When you add Sheldon Adelson, Romney’s “host” and his history of involvement in charges of bribery and prostitution and “casino skimming,” according to the Jewish Global News as quoted by VT.

Romney certainly has chosen an interesting crowd to help enrich his heritage as a Mormon Bishop.

The results of the Romney overseas trip?

We had fundraisers generally barring reporters and others with “no access, sit in the corner with no camera”.

To that you can add in unpublished meetings and a failure to identify not just sources of cash, which wasn’t just Israeli but money channeled from other foreign supporters from Russia, India, Britain, Switzerland and elsewhere.

Is there any doubt why Romney would leave the country to raise money when he has over a thousand Swiss bank accounts?