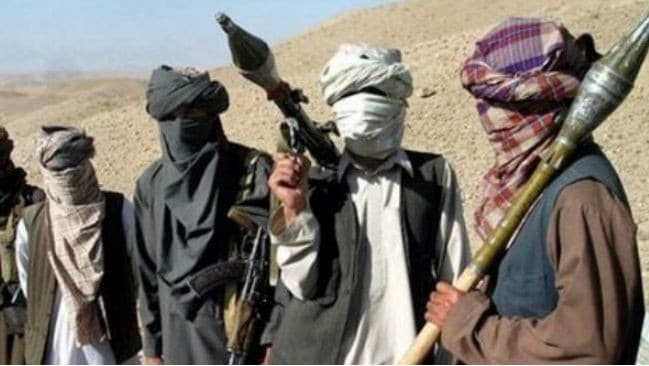 Today, Secretary of State Clinton added the “Haqqani Networks” to the list of terror organizations though Americans continue to negotiate with the Haqqani’s.  America is nothing but consistent at being inconsistent.

America plans on continuing talks with Irbrahim and Jaluddin Haqqani despite the “branding” as terrorists.   Would a sane person attend a meeting with a drone overhead?

The Haqqani’s were organized and trained by the CIA and, during the period the Soviet Union assisted the government in Kabul, they were considered American allies.  In fact, the Haqqani’s were among America’s most valued allies.

Thus, despite the “kill orders” put out on them, America will still be talking with them, that is, when not killing them.

Now the Haqannis stand accused of working as an arm of the ISI, the American financed and trained Pakistani intelligence agency headed by General Pasha, a very moderate and professional officer, formerly of Pakistan’s air force.

Pasha may be respected, even “hand picked” but he also has a mind of his own and a wealth of personal integrity, much like his predecessor, General Hamid Gul, former ISI Chief, close friend of half the generals of America but now on a “terror list” like the Haqqani’s.

Gul is one of my friends also.  I wonder if I am on a list.

General Pasha and I have had discussions in Islamabad along with Commodore Iqbal, his communications chief.  Both are highly professional, enjoy full confidence and support of their peers in America and are excellent dinner companions.

Friends at the War College back in the US reminded me to tell a certain 4 star general to cut back on his smoking. I wonder when he will end up on a terror list.

America is now accusing these ISI officers, handpicked by the US for their position as managing a terrorist organization that is openly at war with the US and, according to US policy and statements of Secretary Clinton, closely aligned with Al Qaeda.

Few organizations consist entirely of unemployed taxi drivers and cooks, except, of course, the US Army.

Several years ago, Secretary of Defense Leon Panetta believed fewer than 12 Al Qaeda operatives were in that region of the world.  Each of the 12 has been captured and killed even more times than Osama bin Laden has died.

Can terrorist groups be considered a threat when their personnel roster is made of negative numbers?

Despite the fact that the “number two” Al Qaeda operative, according to stories experts believe wild and speculative have been killed in drone attacks nearly a dozen times, “Al Qaeda” still manages to find “suckers” to take this job.

If only Mitt Romney would agree to be Al Qaeda’s “number two.”  If he lived long enough, he would have them bankrupt in a week.

The rationale, if one looks at it carefully, is that the US believes Haqqani are Taliban, working closely with American allies and are closely aligned with an international terror network which either never existed or is made up entirely of FBI informants or former CIA operatives.

Thus, the US plans to continue talking to the Haqqani though continually targeting them with drones and will send billions of dollars of aid to fund Pakistan’s ISI which they believe manage this organization that is keeping at least one American prisoner and may be planning attacks on the United States.

Is there any wonder Mrs. Clinton suffers from periods of confusion?  I certainly do.

It gets better.  The Haqqani are, according to recent “estimates” which, as with everything that comes from the US were prepared by private contracting firms that are unidentified but known to be run by offshore corporations owned by persons unknown to the United States.

No one, not the CIA, not the Army, not the President or Congress, not in the United States anyway, is ever told where any information comes from.  Since the Bush presidency, knowing whether an intelligence report was true or not spoiled the fun of it.

Thus, all American intelligence on Afghanistan results from information purchased from companies hired by the Bush administration, headquartered in the Cayman Islands or Dubai, owned by people no one knows and staffed by employees like Raymond Davis, the murderer of two Pakistani civilians.

Davis was convicted but released with the US State Department, after family members of the victims were tortured, agreeing to follow Islamic law and pay “blood money” for the release of Davis, the murder of two unarmed pedestrians.

Davis has faced additional charges of assault since returning home but his murder conviction in Pakistan in no way interfered with his Top Secret security clearance.

The fact that he admitted to everything but the assassination of Abraham Lincoln in his first 15 minutes of custody had no effect on his suitability for top level “black ops” employment either.

I spoke with the arresting officers who indicated that they wanted to hold their hands over their ears as Davis, during his questioning, admitted to a series of terror attacks inside Pakistan and told of US plans to stage raids on bases in Pakistan and blame them on the Taliban.

It seems that his organization was using Pakistan as a base, not just for attacks inside Pakistan but for staging assassinations and terror attacks inside Iran, run from bases in Baluchistan, attacks blamed on a group called the Jundullah.

Most Jundullah members were Israeli with support personnel from MI 6 in Britain and Blackwater, an American company, if Davis is to be believed.

These lead us to the issue of what is the Taliban and what isn’t the Taliban.

We know what we are told.  In order to be Taliban, you wake up, beat up the first woman you see, get together with friends, burn down a school, throw acid on the women students and burn a fuel truck heading north from Karachi.

Then you eat lunch, usually rice and goat meat.  All Taliban are millionaires, don’t you know, though the region they live in uses no money, has no stores, nothing to buy and nobody has ever found a member of the Taliban with enough personal possessions to be considered, by American standards “very poor.”

Then, just perhaps, one might actually talk to a member of the Taliban.  They remind us that, when the Taliban ruled Afghanistan, most of those receiving higher education were women.

In fact, at least half or more of what Americans were told on a daily basis of the Taliban was entirely fabricated.  You would almost think American news was controlled somehow by a vast conspiracy that had them continually lie.

The Taliban admit passing strict rules on dress, making men grow beards but they also admit to taking over a country overrun by drug dealers and criminals, pretty much like the gang the US is working with now, Karzai and the Northern Alliance, and suppressing crime and bringing back safe streets and law and order, albeit of a religious nature.

Recent investigations of “Taliban attacks” have led to intelligence assessments that now blame American allies in the Northern Alliance for every act of terrorism against unarmed civilians, women and schools, attacks blamed on the Taliban.

US intelligence sources are suppressing these reports which would prove our initial basis for attacking Afghanistan may well have been totally contrived and, in actuality, a war of aggression against a “semi-peaceful” people.  Nobody has ever accused the people of Afghanistan of being “peaceful.”

The Taliban openly admits to shooting at soldiers.

Having had the opportunity to “grill” Taliban about their activities and beliefs, I found much to be concerned with.

One obvious point is simple.  If America had failed to attack Afghanistan looking for Al Qaeda that didn’t exist and trying to find the endless underground fortresses that were the product of Secretary of Defense Donald Rumsfeld’s imagination, there would have been no war.

No training facilities of any kind have ever been found except on videos supplied by the Israeli Company “SITE Intelligence,” run by the daughter of a former spy executed in Iraq.

None of their material has ever been able to pass authentication though the US government has kept them on contract for many years.  In fact, every single piece of “evidence” they claim they “found on the internet” has, when subjected to forensic examination, proven to have been counterfeit.

Was the intelligence that led to the ill-fated invasion of Afghanistan based on information they “found” on the internet or from other similar sources, none professionally vetted, all operating under “push” conditions.

“Push” intelligence is when results are provided and intelligence to match the needed results is manufactured.

Both President Bush 43 and Prime Minister Tony Blair face war crime charges based on their part in ordering “push” intelligence to justify attacks of, not just Iraq, but Afghanistan as well.

The drone attacks in Somalia and Yemen under President Obama are based on similar “push” intelligence.

“Push” intelligence is the entire basis of all IAEA information that supports the conclusion that Iran has a nuclear weapons program.  As early as 2007, the CIA rejected their conclusions as flawed and every National Intelligence Estimate since then has found IAEA conclusions based on wild speculation despite the fact that statements by leaders of Israel, Russia, the United States and other nations have repeated these conclusions as fact despite the fact their own intelligence agencies have discarded them after extensive, even exhaustive examination.

Like the case against the ISI, Taliban and Al Qaeda led, CIA founded Haqqani Networks, facts don’t exist, nothing fits and Secretary Clinton found it convenient to brand one more group, as with the Taliban and even the CIA’s Osama bin Laden, as “terrorists of convenience.”

In an interview with a Taliban representative I once asked them:  “Why don’t you just surrender.  Nothing would hurt America more.  They would be forced to go home, abandon their opium crop and heroin processing plants, put thousands of contractors out of work and invent some other place to start a war.”

The answer, surprisingly glib:  “Why not Afghanistan, if we weren’t killing Americans we would be killing each other, it makes no difference to us.”

And America thinks it is going to win a war in Afghanistan.  I wish them (us) good luck with that.