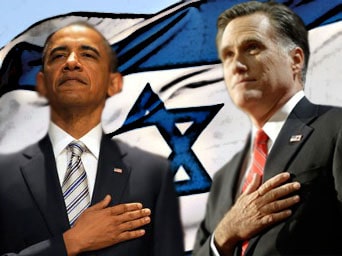 Home after such a long absence and of course I took the time to vote making sure that I cast my vote (Democratic ticket, because there was no credible alternative). However the last debate on foreign policy was an insult to America, insult to all Americans, certainly an insult to the Arab Spring.

Both candidates tripped over other with demeaning statements and outbidding each other as if it was an auction, declaring their loyalty and commitment to Israel, over and over as the only US ally in the Middle East perhaps in the entire world.

Israel and Israel’s agenda was by far the only agenda on the table for both candidates, and both made sure they direct their statements to the “Jewish Vote” which represent 2% of the population, albeit 60% of the donations, ignoring the 98% of the people who have broader concerns than Israel and its constant threat to Iran. Both made Israel the center of the universe.

Latin America was briefly mentioned not by Obama but by Romney as possible trading partners and as an alternative to trading with China. Though Latinos are a substantial and decisive but marginalized vote. Of course no one expected the candidates to speak about ending the boycott of Cuba, the longest boycott in history. Cuban exile votes loomed large with Florida as a key state.

China took a back seat to Israel and Iran, with both candidates showing concerns for an ever-increasing role for China in East Asia, its back yard.

China does not have military presence close to our shores while the US is allover the place in the Far East perhaps taking steps that will escalate into a “Cold War” with China, while keeping the shelves at Wall Mart fully stocked.

Both candidates seem obsessed with Iran and the potential of Iran having nuclear weapons. Both candidates are up in arms over a potential nuclear program, while totally ignoring (out of fear) an Israel with over 250 nuclear bombs. Both labeled Iran as a major and key threat to our national security when in fact Iran did not attack any of its neighbors, did not threaten the people of the US, though exercising its rights as a regional power, a role we accepted and promoted during the reign of the late Shah but now deny it to the Islamic Republic of Iran. Whether we like it or not, Iran is a regional power and the US and its allies in the region must deal with this reality.

As for Iran nuclear weapons, I do believe Iran does not want any nuclear weapons. It has declared its intentions times and times again. Beside I think it is stupid and reckless for any country in the region, especially Iran to pursue any armed nuclear program. A waste of money, resources and it will not add any thing to the security of the country.

The debate was all about Israel, with nuclear weapons perhaps exceeding that of Great Britain and France. Israel and its allies within the administration and on Capital Hill know well that Iran is not a threat to Israel, but Israel use Iran as a “blackmailing” issue to fleece the US and Europe out of tens of billions of dollars and blackmailing not only the two candidates but the entire Congress to submission.

Missing from the debate was any mention of the Arab-Israeli conflict and the continued Israeli Occupation, the longest in modern time, which Romney mentioned in passing when he referred to the “stopped negotiations for the last two years”.

Of course no one expected the two candidates with eyes on the 2% of the votes to mention ending the Jewish Occupation, tearing down the Apartheid Wall, ending the ever expanding Jewish Settlements which vastly eating up what is left of Occupied Palestine (22% of historic Palestine), and the more than 550 security checkpoints that chock and humiliate.

None of the candidates dared mention or raise the issue of a intransigent Israel that kills and murder at will, that invades and send its armies across borders as it chose’s, and one that simply destroyed Gaza to the ground while Israeli and American Jews stood and cheered on.

Both candidates took a humiliating and condescending attitude toward the Arab Middle East and the Arab Spring, forgetting the fact that but for the US consistent if not criminal support for dictatorial regimes in the Middle East there would be no Arab Spring and no Benghazi.

Both candidates expressed strong views on and made commitments to bring about and promote democracy, equal rights for women. They want Arabs to exercise free speech when both dare not speak up demanding Israel brings it occupation to an immediate end.

Of course the young people who took to the streets in Cairo, in Tunis, in Tripoli, Benghazi, in Sana’a and now in Syria not because they want to substitute a “military” dictatorship with a “religious” dictatorships, but because they want freedom, liberty, justice, equal and fair opportunity, a chance for their future and that of their children, and they did not wait for Barrack Obama or Mitt Romney permissions to do so.

They took to the streets, they died, they cried and they cheered without having to wait for political Washington to give its blessing. Let us give the people of the Arab Spring the chance to work through a process that we here in America took some 180 years and succeeded partially with the passing of the Civil Rights Legislations, that gave disfranchised Blacks a chance for an equal opportunity and equal citizenship.

Arab and Muslims more than any one, more than America are worried about “Jihadists” a contagious disease first introduced by America in Afghanistan.

Of course and as expected both candidates when mentioning Jihadists simply ignored the simple fact that happy people with rewarding jobs, with a future for themselves and their families, treated with respect and dignity by the authority, not oppressed by security agencies or bureaucracy with a stake in the future do not go out, kill others and kill themselves. Only those with no hope for the future do kill themselves. I guess the same is true in America. Did we ever read or hear of a happy person going out killing others and then turning the guns on themselves?

The future of the Middle East and the Arab Spring lies not with the US but with the people of the region, they have to learn how to solve their own problems without shooting and killing each others. Ah didn’t we do that for 4 years killing over 750,000 soldiers and undetermined number of civilians? To do Arabs need a chance to exercise democracy, make mistakes, repeat elections, and most of all create constitutions that guarantees equality of men and women and guarantees rights of citizens not rights of leadership against citizens. A chance to learn and exercise freedoms long denied to them.

Finally there is not much for the Arab Spring to learn from American politics, driven by money, sound bites, an army of pollsters and 30 second ads, and of course and ideology that is stifling and choking the nation. Who would believe that the cost of this presidential election is close to $2 Billions? Unbelievable.