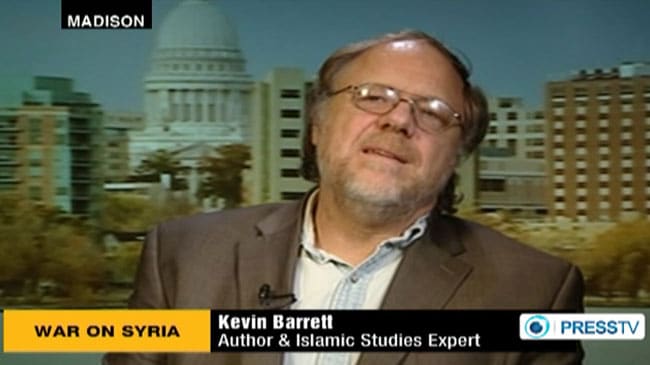 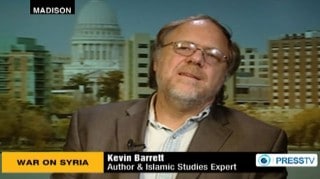 The al-Qaeda mercenaries in Syria operate on behalf of the Israeli regime and the West, aiming to break up the Middle East and spread sectarianism, an analyst tells Press TV.

Al-Qaeda leader Ayman al-Zawahiri recently called for support for the foreign-backed insurgents in Syria in their fight against the government of Syrian President Bashar al-Assad.

Meanwhile, despite a temporary truce that took effect in Syria on Friday, the insurgents launched attacks in several areas, killing dozens of people and injuring tens of others.

Syria has been experiencing unrest since March 2011. Many people, including large numbers of security forces, have been killed in the turmoil.

Damascus blames the West and some of its regional allies, including Saudi Arabia, Qatar and Turkey, for arming and funding the insurgents.

Press TV has conducted an interview with Kevin Barrett, an author and Islamic Studies expert, from Madison, to further discuss the issue.

Barrett is joined by two additional guests: Sheikh Omar Bakri, a Salafist activist from Tripoli; and Omar Nashabi, with Al-Akhbar newspaper, from Beirut. The following is a rough transcription of the interview with Barrett.

Press TV: Why do you think that the Syrian government even agreed, to begin with, to this ceasefire?

Barrett: I think the Syrian government has a lot of tough choices in front of it. In the long run, the Syrian government knows that it’s going to have to reform; but right now, it’s fighting a destabilization campaign which is being led by the US-Zionist axis of evil, as we might term them, with support from Saudi Arabia and, unfortunately, Turkey, which looked like it was going to be an honest player in the Middle East just a year ago.colorado lottery

As I understand it, the Syrian government entertained or accepted the idea of a ceasefire, and the first party that rejected it was one of these groups that called themselves an al-Qaeda affiliate.

The idea of an al-Qaeda affiliate which claims to be fighting for Islam, to be destabilizing an Islamic country on behalf of the Zionists and the American empire is kind of laughable.

I think one of the reasons that they won’t honor a ceasefire for Eid is that al-Qaeda is essentially an infiltrated organization that operates on behalf of the empire rather than fighting against it.

Al-Qaeda, of course, did not have anything to do with the 9/11 attacks. That was an inside job run by people in the US and Israeli intelligence apparatus.

Al-Qaeda is really a manipulated group that serves to smear Islam. It’s created a negative brand name that only about seven percent of Muslims like, and the other 90 percent-plus don’t like. It’s destabilizing the Middle East on behalf of Zionism and the US empire.

That’s what we’re seeing in Syria today. When it rejects a ceasefire for Eid al-Adha, that just shows us that this group is really not much more of a Muslim group anymore than the people who are pretending to be 9/11 hijackers in Florida were actual Muslims. These were people who were well known to be taking drugs, visiting prostitutes and so on…

(In response to rhetoric by previous guest speaker, Sheikh Omar Bakri) He’s kind of insisting that al-Qaeda is a wonderful Sunni group fighting on behalf of Sunnis; is a perfect example of the sectarian nature of this group.

These people are tasked by the Zionist and the empire with spreading sectarianism in the Muslim world, that is breaking up Muslim countries into different sects and different nationalities.

Of course, al-Qaeda is mainly about sectarianism and it’s part of this crazy takfiri ideology of this tiny minority of extremist Muslims who say that anybody who doesn’t believe exactly what we believe is an evil apostate that could be killed – an evil unbeliever. This is nonsense…

Your perspective, from a political perspective, do you think that it would be in the interests of the Syrian government, on the one hand, to say that they would stand by a ceasefire and then breaking it themselves? Let’s look at this, from your perspective. I would like to hear your take.

But in the end, as I understand it, the Syrian government did accept the ceasefire, and that it was first broken by these people claiming to be al-Qaeda.

One never really knows precisely what’s happening on the ground in these kinds of situations. The first casualty of war is always the truth. The narrative, as I understand it, that makes the most sense is the way I described it.

It’s not in the interests of the people in the region to have the situation deteriorate and fall apart into bloodshed and chaos.

I agree that the Syrian government does need to evolve and become more representative of its people. There’s no question about that. The way to make that happen is not through a divisive civil war pitting different Alawites against Sunnis, against Kurds and so on, breaking it up into little pieces.

That’s exactly the… Israeli plan, to destroy the Middle East by breaking it into tiny little pieces along ethnic and sectarian lines. That’s exactly what these al-Qaeda people are working for. If one didn’t know better, one would think al-Qaeda was a brand invented by the Israelis themselves.

In fact, it may have been because Bernard Lewis, the Zionist strategist and Orientalist, has been talking for years before there was al-Qaeda, for decades, actually, about needing to create a group modeled on the Ismaili assassins of the Middle Ages to destabilize the Middle East on behalf of Western intervention.

I think that stability is obviously in the interests of the people in the Middle East and in the Syrian government. So, I think that they did accept the ceasefire. It’s the forces of destabilization that have rejected it and broken it.

Press TV: What is the key to bringing peace to Syria, your perspective?

Barrett: I don’t know if there’s a single key. I think we have to get back to the spirit of Islam. We’re in the Eid al-Adha holiday right now and we need to think about the spirit of unity.

“Tawhid”, which is the absolute Unity of God, is reflected in the unity of creation and all of God’s creatures, all Muslims and all people. We shouldn’t be splitting off into different sects, hating people who don’t believe what we believe.

We need to reach out to people from other sects. As Muslims, especially, we need to reach out to other kinds of Muslims who don’t think the way we do, and cross this kind of divide, and end this kind of crazy sectarian conflict that’s being sponsored by the enemies of the Middle East, the enemies of Islam, the people who want to break it up into pieces. We really need to start talking to each other instead of killing each other.