Home Veterans Peace or Perpetual Struggle in the Holy Land? 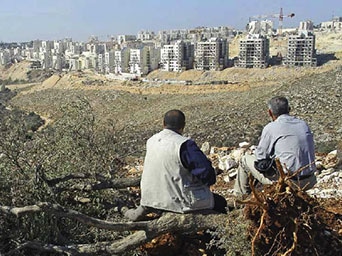 The window of opportunity for peace between Israel and the Palestinians “is closing before our eyes”, warns a hard-hitting report by 22 well-known and highly regarded NGOs from nine EU member states and from Norway and Switzerland. Trading away peace embargoed copy of designed report.pdf

These humanitarian, human rights and faith organisations work at the coal-face in the Occupied Territories and have witnessed the impact of the illegal Israeli settlements and brutal military rule. Nobody pulls the wool over their eyes and the assessment they have produced ought to be compulsory reading for all Western politicians and businesspeople. Here’s the list:

They tell us bluntly that as settlements expand the Palestinians’ access to resources such as water and farmland shrinks, and the Israeli-superimposed infrastructure of checkpoints, settler roads and the separation barrier blocks their freedom of movement and their access to basic services. Palestinian homes and infrastructure are being demolished to make way for still more settlements, dispossessing and displacing many hundreds of people every year.

“The growth of settlements is creating facts on the ground that are violating the Palestinian right to self-determination and making the two-state solution promoted by the European Union ever harder to achieve,” they say. “More than 42% of West Bank

land and the majority of water and natural resources have been seized from Palestinians and allocated to settlements.”

The settlements and their related infrastructure, including Jews-only road networks and the separation barrier, “have carved up Palestinian communities into disconnected enclaves with movement controlled by checkpoints. This ‘land grab’, that has no legitimate security justification, has dramatically reduced the space available for Palestinians to develop livelihoods…” At the same time the settlements have merged with Israel proper, blurring and expanding the internationally accepted pre-1967 border and effectively annexing the Palestinian land on which the settlements are built.

The EU now faces a fundamental challenge and possibly a last chance to match its high principles with effective action, says the report. It must do so without further delay if Europe truly wishes to see a two-state solution.

“During the past decades, the EU has consistently criticized and condemned the settlement policy. Dozens of official EU statements and positions reaffirm the illegality of the settlements under international law and regard them as major obstacles to peace,” says the introduction by Hans van den Broek, Former Minister of Foreign Affairs of the Netherlands and former EU Commissioner for External Relations. “Repeatedly, the EU has stressed that it will not recognise any unilateral changes to the pre-1967 borders, including with regard to Jerusalem.

“As settlement construction has continued and accelerated, however, we Europeans have failed to move from words to action.” The EU, he continues, has refrained from using its huge political and economic leverage to halt and reverse those Israeli developments that contradict the EU’s stated values.

The report also suggests measures the EU and its 27 member states could now take to save the situation and restore credibility. Action against the illegal settlements outside Israel’s recognized borders could not be branded an anti-Israel move, suggests van den Broek, since the aim would be to preserve the two-state solution in accordance with international law.

The plain fact is that settlements control more than 42% of West Bank’s land and most of its water. The report accuses the EU, despite its moralistic policy, of actually helping sustain the Occupation by importing fifteen times more from the illegal settlements than from the Palestinians themselves. The report gives latest figures.

While Israeli settlement farmers and manufacturers enjoy easy access to international markets the Palestinian economy is strangled by Israeli restrictions on movement and access to natural resources. As a result, Palestinian exports have declined to the point where any benefits from the EU’s preferential trade agreement have been wiped out.

Under the absurd Oslo Agreement, which was meant to be temporary and transitional, Israelis were allocated four times more water from the shared West Bank aquifers than Palestinians. But even this over-generous allocation wasn’t enough and Israel has helped itself to 80% more. This, together with restrictions imposed on drilling and water sector development by the Palestinians, means that the average Palestinian’s water consumption in the West Bank is about 73 litres a day, well below the 100 litres per capita recommended by the World Health Organisation. The average Israeli – settlers included – use three and half times as much.

Consequently many Palestinian farmers have to purchase water from mobile tankers at up to five times the price of their normal supply, which has been reduced to a trickle.

In Gaza, where 1.6 million Palestinians live, the picture is even more cruel. Exports from Gaza have been banned almost entirely and are less than 2% of the pre-2007 levels. “EU imports from Gaza over the five years of blockade have been limited to a few shipments of agricultural produce to the Netherlands and two trucks of garments to the UK,” says the report.

Everyone is reminded of the legal position. As the occupying power, Israel is obliged to respect international humanitarian law. The Fourth Geneva Convention (1949) prohibits an occupying power from transferring its citizens into the occupied territory (Article 49).

The Hague Regulations (1907) prohibit an occupying power from undertaking permanent changes in the occupied area unless these are for specific military needs, or unless they are undertaken for the benefit of the local (in this case Palestinian) population.

preferential access to the European market, in what the EU has called “one

of the most generous [agreements] that the EU has ever signed in the field of agriculture”.

The trouble is, Israel’s vicious restrictions and interference in every aspect of the Palestinians’ business activities effectively invalidate that agreement. As a result, says the report, although Palestinians are among the highest per capita recipients of foreign aid in the world, foreign funding cannot offset the paralysing impact of Israeli constraints and collective punishment.

The largest donor to the Palestinians is the EU itself: It gave around €5 billion between 1994 and 2011, and handed over €525m in 2011 alone (this does not include additional assistance from individual member states). So what on earth is the EU doing perpetuating an unlawful situation that requires endless taxpayer subsidies when it has the leverage to force an end to the occupation and set the Palestinians free to thrive in the normal way.

Nothing changes. Nearly four years ago I was writing about the wretched EU-Israel Association Agreement, the purpose of which was – and still is – to promote (1) peace and security, (2) shared prosperity through, for example, the creation of a free trade zone, and (3) cross-cultural rapprochement. It governs not only EU-Israel relations but Israel’s relations with the EU’s other Mediterranean partners – including the Palestine.

Undertakings regarding ‘respect for human rights and democratic principles’ are a condition in Article 2, which says:

“Relations between the Parties, as well as all the provisions of the Agreement itself, shall be based on respect for human rights and democratic principles, which guides their internal and international policy and constitutes an essential element of this Agreement.”

This clause allows steps to be taken to enforce the contractual requirement regarding human rights. The Agreement also requires respect for self-determination of peoples and fundamental freedoms for all.

Fine words and high-sounding aims… but the EU-Israel Association Agreement actually achieves none of these things. In 2002 the EU Parliament voted to suspend the Agreement on the grounds of Israel’s violations of human rights, condemning the “military escalation pursued by the Sharon government” and the “oppression of the Palestinian civilian population by the Israeli army”. The EU Commission ignored the will of Parliament, and since then there has been no improvement in Israel’s behaviour, which has only got worse.

The EU, in its treaties, declares a firm commitment to the Charter of the United Nations and international law. The Charter requires all Members to refrain in their international relations from the threat or use of force against the territorial integrity

or political independence of any state. The International Court of Justice ruling on the Illegality of the Separation Wall warned all states of their obligation not to recognise, aid or assist the illegal situation and reminded all parties to the Fourth Geneva Convention that they are bound to ensure Israel’s compliance with this Convention. These obligations apply also to EU institutions charged with ensuring that EU-Israel contractual relations conform to Community and international law.

Who would believe that the people who head up these institutions need reminding of something this important… and having been reminded still shirk their responsibility?

Israel’s latest reward for its delinquency is the passing of the Agreement on Conformity Assessment and Acceptance of Industrial Products (ACAA), which will make it easier for Israeli pharmaceutical to flood into Europe. The deal was negotiated by the European Commission and signed by the Council of Ministers, causing real concerns about the

impact on British jobs and research in the pharmaceutical industry.

Meanwhile on the question of the settlements, here is an extract from yesterday’s Parliamentary Questions…

Since most of them, including Britain, have done nothing, reconsidering their approach is the least they could do. And note foreign secretary Hague’s failure, as always, to bring international law into the equation. Only lopsided ‘negotiations’ with a gun to the Palestinians’ head will satisfy him and the rest of Israel’s admirers at the heart of our government.

And why wait endlessly for the US which, as everyone knows, is ruled from Tel Aviv? The NGO group’s report urges the EU to now take the lead and get it done. Unfortunately the EU is a cesspit that has been unable to sign off its accounts for 17 years due to error and fraud. Its budget is rocketing even during these times of austerity. It is crammed with pro-Israel pimps and stooges with their snouts deep in the free-flowing trough, and the fee for Britain to remain a member is £37 million a day.

It just can’t be relied on to do the right thing.

Yes, the EU is drinking in the Last Chance Saloon in more ways than one.